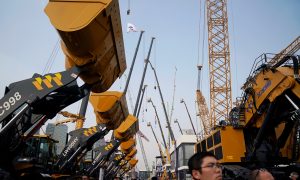 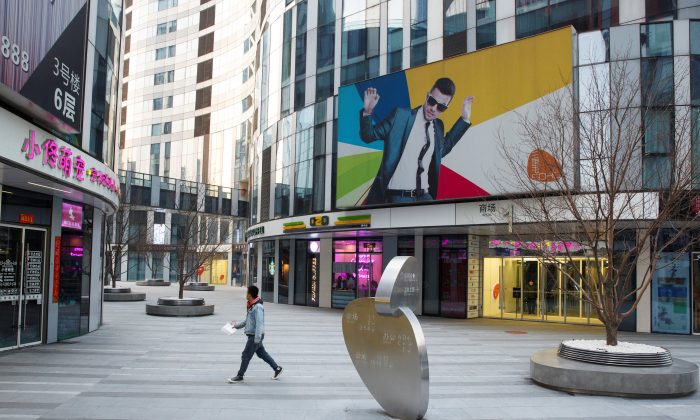 A man walks through the usually busy Sanlitun Soho shopping district after the city emptied ahead of Chinese Lunar New Year in Beijing on Feb. 4, 2019. (Thomas Peter/Reuters)
China Business & Economy

SHANGHAI—Sales by China’s retail businesses during the Lunar New Year holiday rose 8.5 percent from a year earlier, pushing up consumer stocks on Feb. 11, but a cooler pace of growth added to evidence the economy is slowing.

The Ministry of Commerce, in a notice on its website Feb. 10, said retail and catering enterprises had revenue of over 1 trillion yuan ($148.3 billion) between Feb. 4–10 during the holiday.

The holiday is considered a barometer for Chinese private consumption as it is the time for family reunions and gift-giving.

China’s economic growth slowed to 6.6 percent in 2018—the weakest pace in 28 years—and is expected to cool further this year before government growth-boosting measures stabilize activity from mid-year.

But the growth rate for holiday retail sales fell to its lowest since at least 2011. During the 2018’s Lunar New Year holidays, the annual increase was 10.2 percent.

Nomura analysts said the fresh data indicated how consumers were further tightening their belts, and noted that it was the first time Lunar New Year retail sales recorded single-digit growth since the government started publishing data in 2005.

“Weak consumption during the Lunar New Year holidays in 2019 does not bode well for overall retail sales growth,” Nomura said in a note on Feb. 10.

Domestic tourism during the new year break generated revenue of 513.9 billion yuan, up 8.2 percent on the year, with the number of trips rising 7.6 percent to 415 million, the state-run Xinhua said on Sunday.

Domestic consumers were the main engine behind China’s economic expansion last year as other growth drivers such as manufacturing and trade faltered, but their spending has already showed signs of softening.

Retail sales grew the least in 2018 in 15 years, slowing markedly in the final quarter of the year, as incomes increased at a slacker pace while the cost of living rose. Sales in the world’s biggest auto market shrank for the first time since the 1990s.

The topic of how much people spent over the holiday was widely discussed on Chinese social media, with some netizens saying they stayed home to save money while others said they borrowed money to celebrate.

“My hard work that went into achieving one year of savings is no match for the short Spring Festival [Chinese New Year] holiday,” said a post on Weibo that garnered over 5,000 comments.