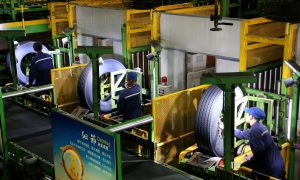 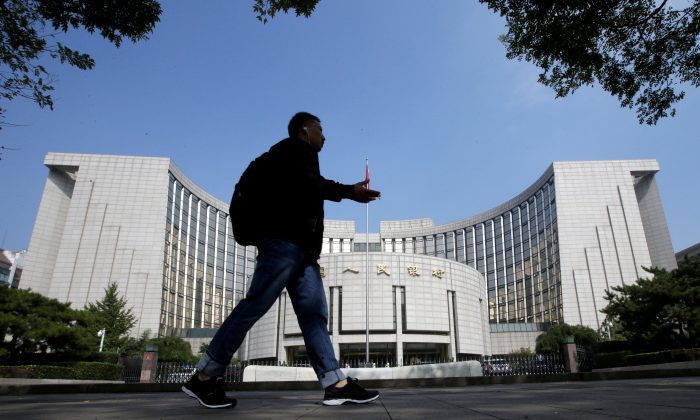 A man walks past the headquarters of the People's Bank of China (PBoC), the central bank, in Beijing on Sept. 28, 2018. (Jason Lee/Reuters)
China Business & Economy

The People’s Bank of China (PBoC) said on Sept. 6 that it would cut the amount of reserves banks are required to hold—the required reserve ratio (RRR)—thereby increasing the ability to lend by 900 billion yuan ($126 billion).

The decision came days after Washington hit Beijing with a new round of 15 percent tariffs on about $112 billion of manufactured goods such as apparel and shoes, potentially hurting small-scale Chinese manufacturing firms.

The cuts aren’t unexpected following the recent State Council meeting, when authorities called for more economic stimulus—in fact, it’s the third time the PBoC has cut the RRR this year. But the latest round of cuts is the most aggressive since at least 2015, and lowers RRR at all banks by 0.5 percent effective Sept. 16, and by 1 percent at some city commercial banks to be enacted in two phases in October and November.

Beijing authorities had to do something in light of the economic and political environment. China is mired in a trade war with the United States, and various economic indicators are at multi-year lows, ahead of the all-important Oct. 1 National Day holiday. Bloomberg reported on Sept. 2 that several experts—including Bank of America, Oxford Economics, and Bloomberg Economics—have all cut their 2020 China GDP growth forecast to below 6 percent, a psychological threshold that the Chinese Communist Party had set to meet its goals ahead of its 2021 centenary.

The latest round of RRR cutting is another stimulus aimed at supporting the manufacturing sector by funneling liquidity to smaller firms. Last month, the PBoC replaced its key lending rate with a different benchmark lending rate called the loan prime rate (LPR), in an effort to lower real borrowing costs for small and mid-size companies.

Interestingly, the PBoC made sure to emphasize that it doesn’t intend to flood the market with stimulus.

“The cuts are not flooding the economy with stimulus, and the stable monetary policy orientation has not changed,” according to a follow-up statement posted by the central bank on Sept. 6.

The tone of its statement is reminiscent of the U.S. Federal Reserve’s recent “mid-cycle adjustment” messaging. The PBoC noted that the 900 billion yuan of liquidity will be offset by the September tax collection period, which will be a cash drain on enterprises, effectively causing the total liquidity of the bank system to “remain basically stable.”

The measured framing of the latest cuts is in line with Beijing’s carefulness in its recent easing efforts. The RRR cuts are theoretically depreciative to the yuan currency—which is currently below 7 per dollar—and given that Washington has already labeled Beijing as a currency manipulator, the PBoC doesn’t want to suggest further currency depreciation. So far, it has refrained from cutting its benchmark interest rate, although the previously discussed August LPR reform was effectively a rate cut.

Naturally, higher lending activity will lead to a greater number of defaults.

Beijing has shown a greater appetite to let companies default on their debt. Official data showed that the value of bond default was 44 billion yuan ($6 billion) in the first half of 2019, compared to 101 billion yuan ($14 billion) for all of 2018. The 2018 figure wasn’t too far from independent data—Fitch reported that 2018 Chinese bond defaults totaled 111 billion yuan ($16 billion).

“Defaults are beneficial to the long-term development of the bond market and to a more efficient allocation of financial resources,” PBoC Deputy Governor Pan Gongsheng said in an Aug. 13 Q&A with mainland financial magazine Caixin.

And that’s only referring to traded bonds. Defaults on private placement debt, bank loans, and asset management loans through the shadow banking system aren’t as widely reported. Through August, borrowers have missed repayments on a record 32 billion yuan ($4 billion) of private bonds in 2019, according to a Sept. 4 Bloomberg report, which cited data from China Chengxin International Credit Rating Co., a Chinese credit rating firm.

So will the increased lending bring the results Beijing seeks?

Instead, Pang believes the RRR cuts will help alleviate a different problem. Companies will “repay debts with these new loans, which will save some interest costs and avoid defaults on payments.” This makes sense given that the PBoC has reformed the interest rate system and borrowers could see up to a 1 percent decrease in interest on loans by some estimates.

“But this would not boost economic activity,” Pang noted.