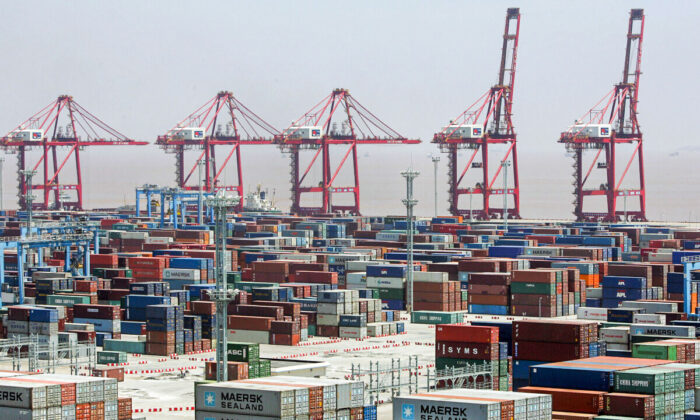 Shawn Lin
Shawn Lin is a Chinese expatriate living in New Zealand. He has contributed to The Epoch Times since 2009, with a focus on China-related topics.
View profile
biggersmaller
Print

China’s industrial city of Ningbo and home to the third-largest container port in the world, has been under a partial lockdown due to a recent COVID-19 outbreak. Analysts suggest that the lockdown measures could cause more disruption to the global supply chain.

According to Chinese state-run media Global Times, Ningbo in Zhejiang Province is under a partial lockdown after detecting at least 23 cases of the CCP virus. The outbreak was reportedly concentrated in Beilun District, the core area of the Ningbo port, putting many local truck drivers and essential port personnel under quarantine.

China’s “dynamic zero-COVID” policy has put the Beilun District under a level I emergency lockdown since 4:30 p.m. on Jan. 1, immediately after several CCP virus cases were confirmed.

According to China’s National Health Commission, the areas where the outbreak occurred were separated into closed zones, controlled zones, and prevention zones based on the transmission risk level, putting them under different management protocols.

Presently, the closed and controlled zones of Beilun District cover 4.66 square kilometers (1.8 square miles) and contain 37,000 people. Those in the closed zone are under full quarantine, leaving home is strictly prohibited, all commercial outlets are closed, and basic daily necessities are delivered to the door. The controlled zones allow only essential personnel to enter, not exit, following the “do not leave unless necessary” protocol.

Ningbo-Zhoushan Port is the second-largest container port in China and the third-largest in the world. It had a 1.1-billion-ton cargo throughput for three consecutive years. Beilun District is the core area of ​​Ningbo-Zhoushan Port, and its closed and controlled zones are near the cargo terminals.

Ningbo Marine, a Chinese freight transportation company, said the lockdown is having a considerable impact on short-term imports and exports in the Beilun port area and the Ningbo-Zhoushan Port as a whole, primarily because the port’s essential personnel and truck drivers are quarantined. In addition, the closed zones have temporarily blocked the main roads entering and leading out of the port city, as well as many highways and terminal entry channels.

According to Ningbo’s local news network, there are more than 20,000 trucks in Beilun District, while only around 7,600 were given special passes to enter and leave the port.

The report said that locking down Beilun District’s trucking industry will affect not only its foreign trade and freight forwarding but also impact the shipping and logistics of the entire Zhejiang Province.

The Chinese Communist Party’s anti-virus controls put a special label on people who have visited a medium or high-risk city within 14 days. Meanwhile, most regions in China put the labeled individuals under a 14+7 day quarantine.

Although China’s lockdowns of big cities to fight outbreaks are prompting concern of many freight companies and merchants worldwide, Ningbo’s Beilun District ports remain mostly operational. Additionally, the city of Ningbo has issued specific countermeasures to ensure the continued operation of its ports despite setbacks.

Chinese freight news website One Shipping said that China’s foreign trade exports and freight forwarding and logistic companies must prepare for the “worst case,” as freight delays and congestion may be inevitable, and will likely have a domino effect on major ports and markets around the world.