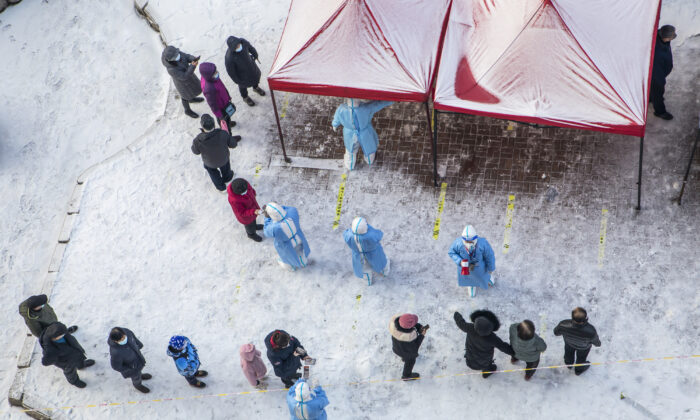 Residents queue to undergo nucleic acid tests for the COVID-19 in Jilin in China's northeastern Jilin Province on March 15, 2022. (STR/AFP via Getty Images)
INSIDE CHINA

China Locks Down City of 4.5 Million Due to Worsening COVID-19 Outbreak

After the Chinese regime locked down a provincial capital of 4.5 million due to the worsening COVID-19 outbreak, locals have questioned whether such measures can be effective in containing the virus and have blamed health workers’ for causing cross-infection.

Changchun, the provincial capital of China’s northeastern Jilin Province that has been hit hard by this round of COVID-19 outbreak, has been put under total lockdown since March 20 in order to achieve the Chinese regime’s goal of being “COVID free” in three days.

Since Jilin is also an industrial hub and has many factories making cars, experts believe this new round of lockdown will further disrupt the global automobile industry already struggling with pandemic-caused supply chain backlogs.

Due to the Chinese Communist Party’s (CCP) practice of suppressing information that harms the image of the regime, its information official figures have been questioned by many as being severe underreports of the actual number.

On March 19, Jilin provincial authorities announced that in Changchun, a city with 4.5 million residents, it would carry out a “clearance” operation to conduct a 3-day city-wide nucleic acid test, locking down all residential communities and shutting down traffic. It’s a move following the Chinese regime Vice Premier Sun Chunlan’s visit to the city on March 14, during which she demanded that “dynamic clearing of COVID-19” be realized as soon as possible.

A staff member surnamed Zhao who works at a hotel in Changchun Lvyuan District, told the Chinese-language edition of The Epoch Times on March 21 that the hotel was exclusively occupied by medical staff, and almost all hotels in Changchun have been requisitioned by the government for pandemic-containment efforts.

“Changchun City is now completely closed down. Only emergency vehicles like ambulances can move around. They said that the outbreak could be cleared in three days. Is it possible? There are more than 10,000 [infected] people. No one can tell. The government can’t either,” Zhao said.

Wang Min (pseudonym), a resident of an employees housing complex, told The Epoch Times that more than a dozen of residents had tested positive, including his wife, who was taken away to centralized quarantine on March 18.

He said that his wife had previously done four nucleic acid tests that all returned negative.

“I told her not to go downstairs to do the test because there were so many people waiting to be tested and it’s dangerous. But our child’s school required the parents’ test results.” So his wife went downstairs and queued up for a fifth nucleic acid test. The result of the test was abnormal. And in the follow-up test, she tested positive on March 15.

Wang said that his wife was put on a bus with other people both infected and uninfected. She was then put in a mobile hospital, sharing a room with 30 to 50 people. She’s been there for days, but hasn’t been tested or given any treatment, he said. The same was the case for the other patients there.

Wang believed that the main reason for the worsening spread of COVID-19 in Changchun was the chaotic nucleic acid testing conducted by health workers that he said caused cross-infection. In addition, authorities hadn’t taken any effective measures to take care of those who tested positive, he said.

Since Jilin is an important center of China’s automobile industry, the outbreak and the mass lockdown have severely impacted this industry. Both Toyota and the Volkswagen manufacturing plants in Changchun have indefinitely suspended production and closed since March 14.

Frank Xie, a professor at the University of South Carolina, told VOA the current suspension of these factories in Jilin is likely to further hit the global auto supply chain, which is already dealing with supply bottlenecks caused by the pandemic.

“The problems in Jilin this time will have a long-term impact on the production and manufacturing of global automobiles, and even on the used car market. The closure of the city (maybe) will last for several months, so the impact will be very large.”