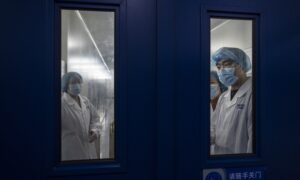 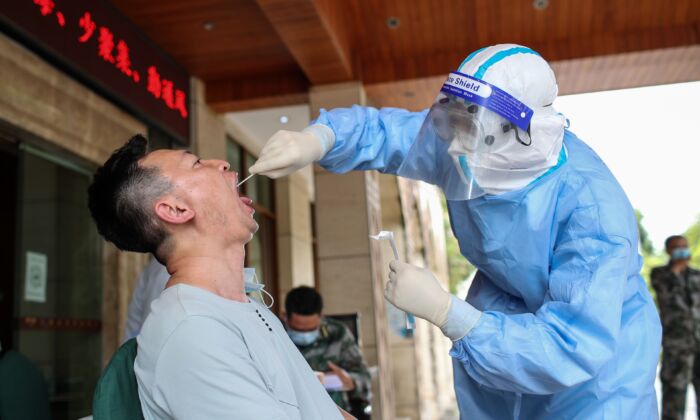 A resident is tested for the COVID-19 in Ruili in southwestern China's Yunnan Province on Sept. 15, 2020. (STR/AFP via Getty Images)
INSIDE CHINA

The Chinese regime announced a new COVID-19 outbreak in its southwest border city on March 31, emphasizing that over 40 percent of infected people in the city hold Burmese passports.

The regime quickly locked down the city, closed the border, ordered a mass test of all residents, and cracked down on people who cross the border illegally and those who shelter them.

This is the second outbreak in Ruili, a city in Yunnan Province on the border with Burma (also known as Myanmar), with nine people testing positive for the CCP (Chinese Communist Party) virus, commonly known as novel coronavirus which causes the disease COVID-19.

The regime didn’t announce how the outbreak started, but state-run Xinhua published a commentary on March 31 to criticize the local government for not learning from its first outbreak, which happened in September 2020 and started with two Burmese people who entered Ruili illegally.

State-run Health Times reported on Wednesday that the new outbreak in Ruili is worse than the first one, it’s hard to control the border, and the outbreak in Burma is very serious.

The regime said the outbreak started on the morning of March 28 when a Burmese citizen tested positive and the regime tested that person’s close contacts. By March 30, nine people had tested positive for the virus. Five Chinese nationals and one Burmese citizen were diagnosed with COVID-19, and three Burmese nationals were deemed asymptomatic carriers.

The Ruili city government announced on Wednesday that all residents need to take the CCP virus test and all residents will be quarantined at home for one week. Residents need to apply for a permit from the community committee if they need to leave home and the city is locked down with only grocery stores and pharmacies allowed to operate.

“Strictly crack down on people who cross the border illegally, who organize the illegal border crossings, and who shelter illegal immigrants,” the regime pledged.

In addition, the authorities ordered everybody who visited the city on March 14 or later to report to the local government no matter where they are. This kind of self-reporting means that people will be quarantined at a quarantine center for two weeks, which is reported to be expensive and in bad condition.

“The first patient was diagnosed on March 27. Jiegao township was locked down on March 28. All of our residents received the first test on that day. On March 31, we received the second test,” Liu Bin (pseudonym) a businessman who operates a jade store in Jiegao in Ruili told the Chinese-language Epoch Times on March 31.

Local people in Ruili complained that the methods that the regime uses to curb the spread of the CCP virus created difficulties for them.

“At 3:30 a.m. [on March 31], the official from the community committee knocked on our door and asked all my family members to take a test downstairs,” Health Times quoted a high school student in Ruili.

The report said the regime arranged for over 1,800 medical staff from neighboring cities to come to Ruili to support COVID-19 testing.

Meanwhile, a large number of people who work in the border town Jiegao and live in Ruili city center can’t go back home from their working place because the regime closed the only bridge connecting Jiegao and the other part of the city, according to the Health Times.

Jade businesswoman Wang Min (pseudonym) told the Chinese-language Epoch Times on March 31 that all the local residents finally could go back home and be locked down there.

“The tourists and the [Burmese] businessmen are in a bad situation. They are stranded at hotels and can’t leave. Chinese people who went to [Burma] for business can’t come back as well because of the lockdown,” Wang added.

The Chinese regime has denied since day one that the CCP virus came from China. This time, the regime didn’t announce specifically where the Ruili outbreak started, but emphasized that the city has a 100-mile border with Burma and that the neighboring country is suffering a serious outbreak.

The report focused on the epidemic situation in Burma and the difficulties of border control, which gave readers an impression that the virus in Ruili is from Burma.

Spring is a tourist season in Yunnan, and Zeng encouraged people to travel and said it’s unlikely that the outbreak in Ruili will spread to other cities in the province.