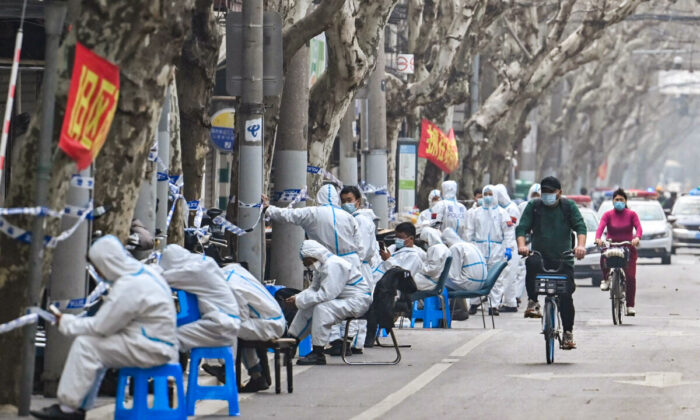 Workers are seen wearing protective clothes next to some lockdown areas after the detection of new cases of covid-19 in Shanghai on March 14, 2022. (Hector Retamal/AFP via Getty Images)
INSIDE CHINA

China Locks Down 51 Million as COVID Surges Across the Country

At some Chinese universities, students broke down in tears after some were sealed inside their dorms without access to water or toilets.

Elsewhere, in some rental apartments, tenants were shocked to learn that they had to pack up within hours because what they considered their home would be converted into quarantine facilities.

Over the past week, scenes of exasperation have emerged in various parts of China as officials battle the “stealth omicron” variant that has fueled the country’s purported worst outbreak since the pandemic began two years ago. Among the hardest hit is the southern technology hub of Shenzhen, whose 17.5 million residents were put into lockdown. Dongguan city in southeastern China and northeastern Jilin Province, home to 10 million and 24 million inhabitants, respectively, were also ordered into lockdowns.

Since March 1, China has reported more than 10,000 cases spanning most provinces, Lei Zhenglong, the vice director for the National Bureau of Disease Control and Prevention, said on March 14, adding that in some districts, the outbreaks are still developing at an “accelerating speed.”

Critics have long been skeptical of Beijing’s official virus figures, citing the Chinese Communist Party’s routine practice of suppressing information that harms its image and its need to sustain the narrative that the regime is keeping the pandemic under control. Lei’s tally marks the highest recorded in the country since April 2020.

“There’s no way it’s accurate,” one resident from Changchun, where 9 million residents had already been locked in their homes for three days, told The Epoch Times, referring to Beijing’s official infection count.

As most countries learn to live with the virus, mainland China is among the final holdovers of the “zero-COVID” policy, despite growing questions about whether the goal is ever achievable and concerns over its mounting toll on the economy.

On March 14, Lei insisted that the approach, which the regime has recently labeled as “dynamic COVID-zero,” is “absolutely effective.”

“We need to take action earlier, faster, stricter, and more thoroughly in outbreak response because the Omicron virus is sneaky and fast-spreading,” he said.

‘We Have Families, Too’

The policy has pushed officials to defer academic and civil servant tests, and more than half a dozen cities have suspended in-person classes. Many higher institutions are also barring their students from setting foot outside.

The strain is already showing among the general populace.

At Shanghai Sixth People’s Hospital, which was locked down after one patient tested positive for COVID-19, an emotional nurse confronted a doctor who asked her to care for COVID-19 patients despite not having adequate protection gear. The doctor had told her that “COVID-19 is not a contagious disease” and apparently hit a male nurse who refused to comply.

“Since you claim it’s not contagious, take your mask off,” the nurse shouted at the man, who was wearing a full hazmat suit and a transparent face shield in a video that went viral on the Chinese internet.

“You can ask all of us nurses here, most of us are taking sleeping pills,” the nurse said. She added that they rise at 4:30 a.m. to test patients’ health and sleep on paper boards. “My pulse rate is 120 minimum. … We have families, too.”

When authorities in Guangzhou, a southern port city, closed an exhibition midway after identifying one virus case—trapping roughly 50,000 visitors inside for mass testing—some climbed fences to get out.

In Jilin Province in northeastern China, students wrote lengthy pleas online after campuses were closed off over infections, leaving students to fend themselves. Some said their sick classmates were sealed inside their rooms, denying them access to bathrooms.

“A lot of people here are suffering from fever. Our teachers kept giving us antipyretics, telling us to wrap ourselves in a blanket and sleep it away, and that they will try a different drug if it doesn’t work,” wrote a female student from Jilin Agriculture Technology College on Chinese social media. For those who were healthy like her, there was a shortage of drinking water, disinfectants, and even sanitary pads, she said. “We are basically left to die,” she said in a post that has generated 2.76 million likes. “Will the school be happy if everyone on campus becomes virus-positive?”

In response to outrage online over the students’ treatment, they were later transferred to quarantine centers. But one student said they were made to wait in the cold for two hours at night in front of the dorm building.

Li Min, who rented an apartment in the city’s upscale Xuhui district, said that she and about 100 other mostly office workers only got a two-hour window on March 10 to move out of her building.

She was incredulous at first.

“This is not a hotel, it’s an apartment. Some of us have lived here for three or five years. To us, this is home,” Li (a pseudonym) told The Epoch Times.

The residents began to protest through all channels available, calling the police and neighborhood committee officials. Eventually the authorities extended the deadline to midnight. The residents paid all the moving costs out of their own pocket, with “not a penny of compensation,” Li told The Epoch Times.

“If they at least gave us two days’ time, we could all understand,” she said. “But they put out such an attitude. … Why do you turn us out like this as if we are homeless people?”

An officer from the Shanghai Municipal Administration of Culture and Tourism told Li that it would be useless to complain to authorities, because half of the officials in her district were in quarantine. Her best option was to “move out as soon as possible,” the officer said.

A staff member for the Xuhui district government told The Epoch Times they “have non-disclosure rules and cannot reveal such information” when asked about Li’s claims regarding local officials being in quarantine.

“Don’t make it hard for me,” the employee said.

District officials later apologized for the tight time frame, saying they were “under significant pressure” to contain the virus and “racing against time.”

Li, who stored some of her 20 boxes of hastily packed things at her friends’ place, plans to stay at a hotel near her workplace for a week as she looks for a more permanent apartment space.

“It’s just laughable,” she said, suggesting that the government policies are more political than practical.

“They don’t want to publicize the information,” she said, adding that it would make Shanghai authorities look bad to admit the full extent of the outbreak.

Zhou Bin (a pseudonym), a hotel marketing manager from Shanghai, appeared to agree.

“The outbreak has hit Shanghai’s economy hard because of the COVID-zero policy,” Zhou told The Epoch Times. “This policy is hooked into the local officials’ careers.”

Chang Chun and Luo Ya contributed to this report.