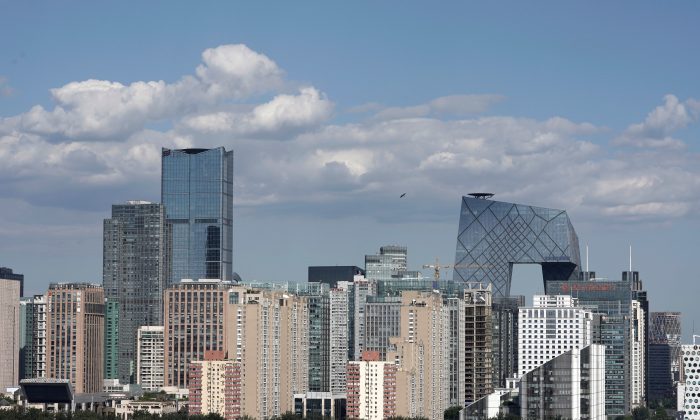 The skyline of Beijing's central business district on a sunny day in China on Sept. 7, 2018. (Jason Lee/Reuters)
China Business & Economy

China Local Governments’ Hidden Debt May Be as High as $5.8 Trillion

BEIJING—Off-balance-sheet borrowings by Chinese local governments could be as high as 40 trillion yuan ($5.78 trillion) and amount to “a debt iceberg with titanic credit risks,” S&P Global Ratings said in a report on Oct. 16.

When including so-called “hidden” local government debt, the ratio of government debt to gross domestic product (GDP) may have reached an “alarming” level of 60 percent in 2017, according to S&P.

China has said it would take steps to measure, assess and curb local government debt. Such off-balance-sheet borrowing is done outside the annual debt quota approved by the central government and via non-bond channels.

As of the end of last year, China’s outstanding government debt on balance sheets amounted to 29.95 trillion yuan, of which local authorities have raised 16.5 trillion yuan through bond issuances since 2015. S&P said local governments’ off-balance-sheet borrowings might currently stand at 30 trillion to 40 trillion yuan.

“That’s a debt iceberg with titanic credit risks,” it said.

Local government financing vehicles (LGFVs) have accumulated much of such hidden debt, and while firm plans are needed to reduce these debts, progress has been limited so far, S&P said.

Concerns about debt levels in China, particularly local borrowing, are on the rise as the economy cools amid deepening trade friction with the United States.

Beijing has again turned to stimulus spending and easier credit, announcing a series of billion-dollar infrastructure projects in recent months and lowering cash reserves that commercial banks need to set aside as buffers.

China has vowed to persist with its multi-year financial de-risking campaign, even as it rolls out economic stimulus measures.

Not only are most of China’s provincial and municipal governments in the red, but China’s debt-to-GDP ratio—which includes central and local government, corporate, and household debt—has grown to 2.55, according to the International Monetary Fund (IMF).

Saddled with heavy debt, the Chinese regime has begun doubling down on enforcing the collection of taxes across all sectors of society—from the entertainment industry to social security and property taxes.

But global ratings companies have been quick to downgrade issuers linked to Chinese regional and local governments.

In September, S&P lowered by one notch the long-term issuer credit ratings of seven LGFVs from Chongqing and Tianjin municipalities, and Jiangsu and Hunan Provinces, that had issued bonds offshore. In the same month, Moody’s Investors Service downgraded five non-financial corporate and infrastructure issuers owned by governments in Tianjin, Jiangsu, Hunan, and Hubei.

Local governments have been forbidden by Beijing to bail out troubled LGFVs.

“We believe China’s recent measures to stabilize growth and boost liquidity in response to internal and external headwinds aren’t necessarily a relaxation of its de-risking efforts,” S&P said in its report.

“Defusing financial risks, including the hidden local government debt, is one of three overarching priorities of the country’s top leadership.”

China might need a decade or more to address its hidden local government debt, S&P said.

By Ryan Woo. The Epoch Times contributed to this report.