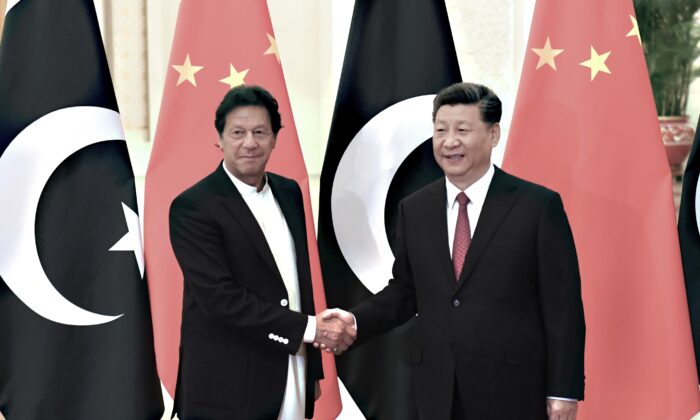 Chinese leader Xi Jinping shakes hands with Pakistani Prime Minister Imran Khan before a meeting at the Great Hall of the People in Beijing, China, on April 28, 2019. (Madoka Ikegami/Getty Images)
Thinking About China

China is enabling Pakistani terrorism again, this time by lobbying against tough measures at international organizations that combat money laundering. An ongoing plenary of the Financial Action Task Force (FATF) in Berlin, from June 12 to June 17, was reportedly the site of “quiet lobbying” by Beijing on behalf of Islamabad.

The two long-time partners in crime are up to no good, from Afghanistan in the West, across the Himalayan mountains to India’s Arunachal Pradesh in the east. The “iron brothers,” as Xi Jinping calls the two terror states, have destroyed a fledgling democracy in Afghanistan with their support of Taliban terrorism. They are now trying to drive India from its northernmost territories through political violence.

The conflict between India and Pakistan stems from the latter’s violation of the agreement at partition in 1947 that princely states could join whichever country they preferred. Hari Singh, the Maharaja of the larger Kashmir region, decided against Pakistan and for India. Islamabad has tried to reverse the decision with violence ever since, and Beijing opportunistically occupied parts of Kashmir with its own troops.

China used stealth and violence to steal a massive region of Kashmir, called Aksai Chin, from India in 1962. Since then, the People’s Liberation Army (PLA) has pushed its boundary with India southwards and recently took another 15 to 23 square miles (0r 40 to 60 square kilometers).

Beijing seeks to soften India’s boundaries by setting Pakistan against the Hindu country and sowing the chaos that will ultimately make the Chinese Communist Party’s (CCP) territorial acquisition easier. This is gray zone aggression against India, a normally peaceful supporter of the status quo. It also weakens Pakistan, making it ever more dependent on Beijing.

In addition to their regular military forces, China and Pakistan support terrorists to destabilize India. Pakistan supports militants in Kashmir, and China supports Nagaland militants in India’s east. The latter was sheltered in China’s Kunming Province as recently as January, according to Indian media.

Pakistan’s terror attacks against India are a form of bigotry, which is clear in the case of Kashmir. In the 1990s, Pakistani terrorism forced tens of thousands of Hindus to flee Kashmir in fear.

Now Indian Prime Minister Narendra Modi is incentivizing them to return with jobs and other benefits. This provokes unrest among Muslim locals and provides fertile ground for the Pakistani government to support militants who, up to the present day, attempt to keep terrorism alive in the region. This puts pressure on New Delhi, which in 2019 was forced to respond with an end to Kashmir’s autonomous status and tough law enforcement measures that, in some cases, approached martial law.

While Pakistan complained at the time, “many analysts said Pakistan has little credibility on the issue,” according to The New York Times. “Pakistan has a long history of covertly supporting militant groups in Kashmir, despite pressure from allies to stop.”

And Pakistani violence continues. Militants killed at least four Hindus over the past couple of months. A man was shot to death in his own bank in Kulgam, another was killed in a government office by “Pakistani-sponsored terrorists,” according to the Bharatiya Janata Party (BJP) president, and a constable was shot to death the day after.

The BJP is the political party of the current prime minister of India, often portrayed unflatteringly by the Western media as “Hindu nationalist.”

There is Hindu bigotry, overambition, and isolated cases of violence. Talk by some BJP supporters of a “Greater Hindustan,” which would include Pakistan and Bangladesh, should end.

But what critics of the BJP elide is the China- and Pakistan-supported terrorism and militarized aggression that fuel India’s nationalism.

In October, a prominent Hindu pharmacy owner was killed, provoking many Hindus to flee Kashmir again.

In May, India’s Northern Army commander Lt. Gen. Upendra Dwivedi said that “Pakistan created a facade of proxy ‘tanzeems’ (outfits) to give an indigenous colour to the insurgency in the Valley after the country faced pressure internationally to stop sponsoring terror activities in Jammu and Kashmir,” according to The Print.

Jammu is a part of greater Kashmir.

As a result of the persistent state-supported terrorism in Kashmir, Hindus who move to the area are scared for their lives, with some staying home for weeks on end. Some Western media blame this violence on Modi’s government rather than on Pakistan. They are blaming the victim for political purposes.

While the CCP lobbies for the removal of Pakistan from the FATF list of financial supporters of terrorism, Islamabad carries on with its use of political violence as a tool of statecraft. The FATF should not cave in.

According to Indian media, an unpublished United Nations report in May found that Taliban-supported terrorists continue to operate training camps in the Afghanistan region, including those that are anti-India in orientation. Both China and Pakistan support the Taliban.

Additional reporting by the Sunday Guardian in New Delhi found that the “camps are … run by officials of Pakistan’s intelligence agency, the Directorate of ISI, inside Pakistani territory, to the east of the Afghanistan province of Nangarhar.”

Joyeeta Basu, the editor of the Sunday Guardian, noted that Beijing wants Pakistan off the FATF list to free billions of dollars worth of Chinese investment in the country. That, she said, “will be a major mistake,” as Pakistan continues to be a terror state.

Furthermore, she cites reports that the PLA is implicated in Pakistan’s own terrorism.

“There have been credible reports of Chinese generals establishing contacts with terrorist groups that Pakistan uses against India, including attempting to revive an India-specific group known as Al Badr, which had gone defunct,” Basu wrote on June 14.

“It was because of China that it took 10 years—from 2009 to 2019—for India to get the Pakistan-based Jaish-e-Mohammad commander Masood Azhar listed as a global terrorist by the United Nations Security Council Sanctions Committee, and this in spite of India having the support of the other members of the UNSC [U.N. Security Council].”

It is not surprising that India has trouble getting U.N. support against terrorism, as the acting executive director of the U.N. Counter-Terrorism Executive Directorate (CTED) is Chen Weixiong, a Chinese national supported by Beijing.

To this author’s knowledge, Chen has not publicly criticized Pakistan’s state-sponsored terrorism against India and Afghanistan, nor has he criticized Beijing’s use of terrorism as an excuse for its genocide in the Xinjiang region.

Under Chen, the U.N. CTED is biased in its approach. While its website prominently displays a report against “extreme right-wing terrorism” (isn’t all terrorism extreme?), it has no such report on “extreme left-wing terrorism,” of which the CCP is the most powerful example.

As should be clear from its support of Pakistan, Beijing hypocritically uses terrorism as a tool of its own foreign policy. Teng Biao, a legal scholar at the University of Chicago, and Terri Marsh, a human rights lawyer in Washington, argue that the CCP is itself a terrorist organization because of its gray-zone tactics.

That would be entirely consistent with its history of supporting underground Maoist organizations globally, as clearly argued by historian Julia Lovell in her book “Maoism: A Global History” (winner of the 2019 Cundill History Prize).

The CCP has, for its entire history, not only engaged in its own terrorism but enabled other terror organizations and terror states around the world.

“China is believed to have paid—or is paying—protection money to terror groups functioning in the Af-Pak [Afghanistan-Pakistan] area to secure its China-Pakistan Economic Corridor (CPEC) projects, as these groups have stepped up attacks against Chinese interests,” Basu wrote.

“If we look at India’s Northeast, China has been funding insurgencies there. Reports are that this has happened in Myanmar and Thailand as well.”

The FATF has a blacklist and a gray “watch” list. It lists Pakistan on the latter, which is a slap on the wrist. Islamabad’s support for terrorism warrants its inclusion on the blacklist, along with two other rogue supporters of terrorism: Iran and North Korea. The FATF should also include China and Russia on its blacklist.

Anything less would suggest that the FATF is too susceptible to CCP lobbying and so is part of the terrorist problem rather than its solution.

It is time for the world to stop allowing the CCP, a terrorist organization that supports other forms of terror, to insinuate itself into global political and economic power bases from which it can lobby for soft-on-terror policies.

The United States, European Union, Japan, India, and other legitimate governments that value democracy, human rights, and stability should deny the CCP the influence and mantle of legitimacy it finds in international organizations like the FATF. We should deny the CCP the chance to do real damage, from within, to the world’s peace and security.