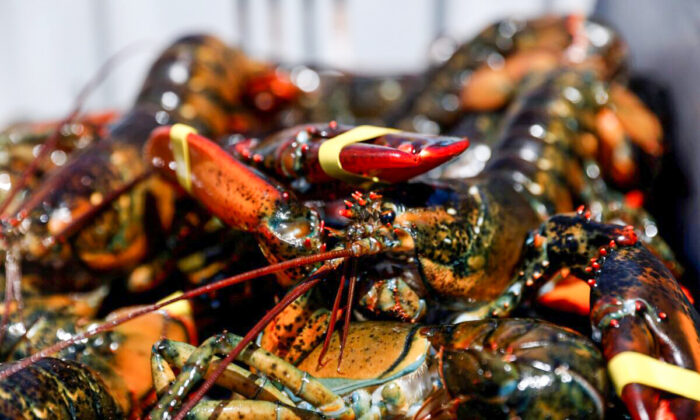 Lobsters are seen in a crate after being brought in by a lobsterman in Stonington, Maine, on July 5, 2017. (Shannon Stapleton/Reuters)
cover-up

Recently, some China-linked Twitter accounts have been spreading misinformation about the source of COVID-19, the disease caused by the CCP (Chinese Communist Party) virus, in attempts to falsely attribute the origin of the virus to lobsters from Maine.

Marcel Schliebs, an Oxford University researcher first noticed the misinformation campaign when the Chinese consul general in Kolkata, India, Zha Liyou, posted the claims on Twitter, according to USA Today.

Schliebs, who is with the Oxford Internet Institute, studies disinformation, propaganda, and divisive political news content in the online information ecosystem of the UK. He found that this tweet was linked to hundreds of Twitter accounts, some real and some fake, spreading information and misinformation from a pro-CCP bias.

The Chinese Consul General Zha said on Twitter on Sept. 19 that the main suspect of the source of the COVID has been identified as cold chain cargo.

“Major suspect of covid via cold chain identified: A MU298 of Nov. 11, 2019 carrying food from Maine, US to Huanan Seafood Market, Wuhan, Hubei via Shanghai. During the next few weeks, many workers around moving this batch of seafood got infected,” the post read.

Looking at mainland Chinese social media posts on platforms such as sohu.com and Weibo, the earliest false claims about the origins of COVID-19 pointed to Maine lobster from the United States.

After the World Health Organization (WHO) sent a team to China and jointly released an inconclusive investigation report in March this year, in the face of increasing international pressure, WHO Director-General Tedros Ghebreyesus said that WHO experts had encountered difficulties trying to obtain raw data from the Chinese authorities.

Many countries, including the United States, have advocated for an independent investigation into the source of the COVID-19 pandemic. However, the CCP has been obstructing such an investigations in various ways.

Kathleen Hall Jamieson, director of the Annenberg Public Policy Center at the University of Pennsylvania, said that these false narratives spread by pro-CCP social media accounts are nothing new.

“Early in the pandemic, Chinese sources spread the theory that SARS CoV-2 originated at Fort Detrick and was spread to China by U.S. military,” Jamieson told USA Today.

“Almost since the beginning of the outbreak, the question of the origin of COVID has been of core importance to the Chinese propaganda apparatus,” Schliebs points out. “This coordinated operation was clearly trying to promote narratives in line with Beijing’s general propaganda strategy and geopolitical objectives.”

After Schliebs sent the information to Twitter, the social media platform suspended the account associated with the misinformation.