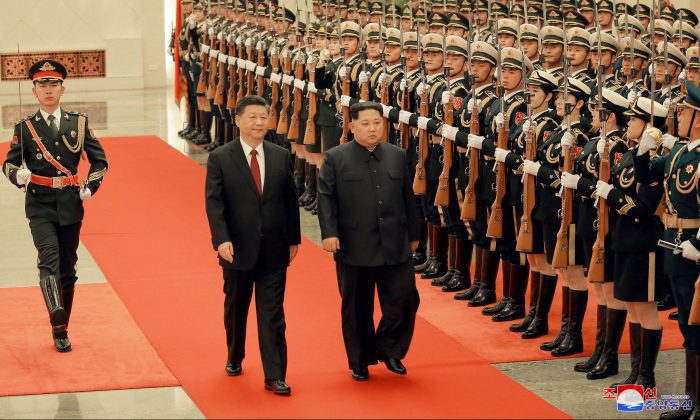 China may be smuggling coal directly from North Korea, according to reports. As one of the five permanent members of the United Nations Security Council, such activity is likely a violation of UN sanctions against Pyongyang.

Japanese media Nikkei reported on June 29 that it had obtained data on about 180 vessels, with close ties to North Korea, from two ship information companies, MarineTraffic and Refinitiv, and tracked their movements for 18 months starting in January 2021.

Nikkei reported that on Aug. 8, 2021, satellite images showed a freighter docked at a coal-loading berth at Nampo port of North Korea. The ship’s layout and features match the North Korean-registered Tae Phyong 2, according to three experts who studied the high-resolution image.

The ship’s AIS data was then used to track its subsequent movements.

On Aug. 9, the following day, its signal was detected in the Yellow Sea near Nampo. Subsequently, it moved westward to the coastal areas of China’s Shandong Province. At 3:00 a.m. on Aug. 13, the ship entered Longkou Port, Shandong Province, and stayed there until Aug. 26. During this period, the AIS signal showed the vessel remained at a berth where coal is normally unloaded, before moving to an adjacent berth.

A March 2022 report by the Panel of Experts of the UN Security Council Sanctions Committee on North Korea also mentioned Tae Phyong 2’s movements in China.

When the panel asked Beijing to disclose information about the vessel, Chinese officials responded, “Tae Phyong 2 entered Yantai port [empty] in March and August 2021 respectively, and left the port [with] fertilizer and other agricultural supplies in the same month.”

However, the image taken on Aug. 8 obtained by Nikkei and the ship’s subsequent movement tells another story.

“The ship departed for China’s coal port by the following day [Aug. 9], so it is hard to imagine it unloaded coal at a North Korean port,” said Takeuchi, a former member of the U.N. panel. “It is reasonable to think that the ship transported the coal to China and then loaded another cargo on its way back.”

Similar suspicious activities have continued into this year.

Previously, North Korean vessels cut off their AIS transmissions so they couldn’t be tracked, and they traveled and traded at night.

China suffered a severe shortage of both coal and electricity last year.

Radio Free Asia (RFA) revealed in an October 2021 report that trading companies affiliated with the North Korean government and military agencies frequently smuggle coal to China via ship-to-ship transfers on the high seas. In order to circumvent surveillance by U.S. satellites, these smuggling ships need to navigate across the ocean at night in the darkness. An insider told RFA that the sudden increase in North Korea’s coal smuggling activity was due to China’s coal shortage and a surge in demand at the time.

Japan’s Kyodo News also stated in a February 2020 report that from January to August 2019, North Korea exported 3.7 million tons of coal to China disregarding the UN sanctions, of which more than 70 percent involve ship-to-ship transfers.

Ship-to-ship transfers of North Korean cargo have long been a sneaky method used to evade UN sanctions, and have been criticized by the international community.