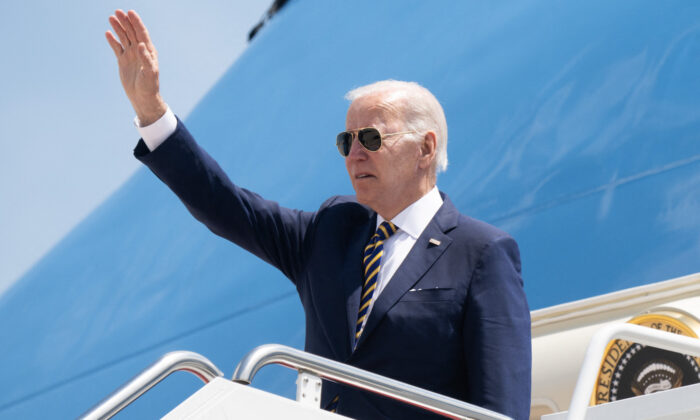 U.S. President Joe Biden boards Air Force One at Joint Base Andrews in Maryland on May 19, 2022, as he travels to South Korea and Japan. (Saul Loeb/AFP via Getty Images)
US-China Relations

Biden is currently touring East Asia to develop better relations with the nation’s partners in the Indo-Pacific and drum up support for his Indo-Pacific Economic Framework, which he is expected to announce in Japan on May 23.

The visits with top leaders in South Korea and Japan also underscore the United States’ efforts to work with allies and partners in the region on countering the rising aggressions from Beijing, which administration officials have described as the leading threat to the United States.

China’s Maritime Safety Administration subsequently announced that it would be conducting exercises in the South China Sea through Monday. It said non-Chinese aircraft and vessels would be prohibited from entering the area but gave no further details.

China claims that it has historic rights throughout virtually all of the South China Sea and has conducted a massive campaign to build artificial islands throughout the region to superficially expand its borders. It has also used the islands to stage military equipment.

Brunei, Malaysia, the Philippines, and Taiwan all also lay claim to parts of the South China Sea.

As such, the region has become something of a flashpoint for conflict.

White House National Security Advisor Jake Sullivan spoke to reporters aboard Air Force One on the way to South Korea, and reiterated that the United States would continue to uphold international access to the region and seek stability in the nearby Taiwan Strait.

“Our view, as we’ve expressed many times, is that we are concerned about peace and stability across the Taiwan Strait and the ratcheting up of tensions,” Sullivan said. “And we believe that China is contributing to the ratcheting up of those tensions through provocative military activities around Taiwan and around the Strait.”

“But we’ve been equally clear that our policy towards Taiwan has not changed … we remain committed to supporting peace and stability across the Taiwan Strait and to ensuring that there are no unilateral changes to the status quo.”

Sullivan also said that Biden would likely hold another virtual summit with Chinese Communist Party General Secretary Xi Jinping. The two leaders had last met virtually in March, when Biden warned Xi of unspecified consequences if the Chinese regime were to provide material support to Russia in its war efforts.

“I wouldn’t be surprised if, in the coming weeks, President Biden and President Xi speak again,” Sullivan said.

The national security advisor added that the president would be working to build local relationships with leaders in South Korea and Japan to better develop resources for trade infrastructure, and that there would be significant developments in trade and the possibility of rulesetting for the digital economy.