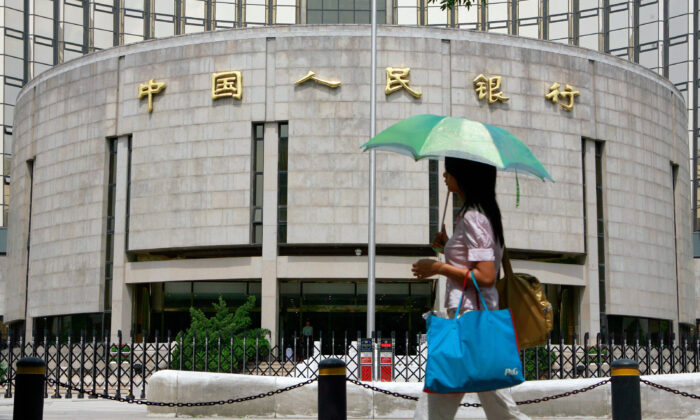 A pedestrian walks past the People's Bank of China, also known as China's Central Bank in Beijing on Aug. 22, 2007. (Teh Eng Koon/AFP via Getty Images)
China Business & Economy

The People’s Bank of China (PBOC) said it was keeping the rate on 150 billion yuan ($23.52 billion) worth of one-year medium-term lending facility (MLF) loans to some financial institutions unchanged at 2.85 percent from the previous operation, to “maintain banking system liquidity reasonably ample,” according to an online statement.

With 150 billion yuan worth of MLF loans maturing on Friday, the operation resulted in zero net cash injection into the banking system.

The central bank also injected 10 billion yuan through seven-day reverse repos while keeping the borrowing cost unchanged at 2.1 percent, according to an online statement.

Later on Friday, the PBOC said it would cut the amount of cash that banks must hold as reserves for the first time this year, releasing about 530 billion yuan ($83.25 billion) in long-term liquidity to cushion a sharp slowdown in economic growth.

The PBOC said on its website it would cut the reserve requirement ratio (RRR) for all banks by 25 basis points (bps), effective from April 25, but analysts said it might not yet be enough to reverse the slowdown.

The cut, which follows a broad-based reduction in December, had been widely expected after China’s State Council said on Wednesday that monetary policy tools should be used in a timely way to bolster growth.

The recent fast spread of COVID-19 cases has induced lockdowns in a dozen of cities across the country, including the financial hub of Shanghai, raising concern over wider disruptions to economic activity.

That means policymakers will need to offer more stimulus to ensure the economy is on course to hit this year’s growth target of around 5.5 percent, analysts say.

A latest Reuters poll showed China’s economic growth is likely to slow to 5.0 percent in 2022 amid renewed COVID-19 outbreaks and a weakening global recovery, piling pressure on the central bank to ease policy further.