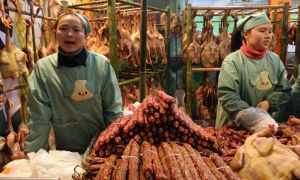 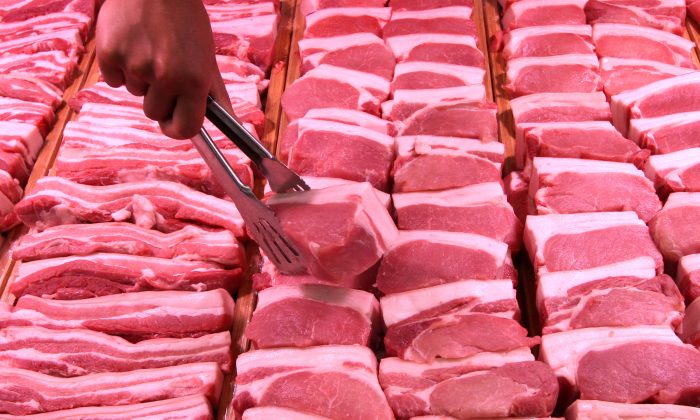 A staff member lifts a pork slice with tongs at a supermarket in Handan, Hebei Province, China, on June 12, 2019. (Reuters)
China Business & Economy

BEIJING—China’s pork imports in June surged from the previous year, customs data showed on July 23, as the world’s top consumer of the meat stocked up on supplies after African swine fever decimated domestic pig herds.

The increase comes as the deadly African swine fever disease spreads across the world’s top pig herd, slashing output and pushing prices of the country’s favorite meat up.

China’s pork imports for the first six months of the year came in at 818,703 tonnes, up 26.3 percent from a year earlier.

China’s wholesale pork prices rose rapidly in the first half of March, triggering large purchases of meat from overseas markets, including the United States. They have been rising rapidly again in recent weeks, with China’s average wholesale pork prices rising 36.4 percent from a year earlier to 23.76 yuan ($3.45) per kilogram as of July 19.

Retail pork prices have also increased in recent weeks but at a slower pace than whole sale prices, with prices up 34.6 percent from a year earlier at 27.29 yuan per kilogram as of July 10.

China’s agriculture ministry is investigating local veterinary authorities in 10 provinces as it tries to slow the ongoing spread of the deadly African swine fever virus.

African swine fever kills almost all pigs it infects but doesn’t harm people. There is no vaccine or cure.

But many outbreaks go unreported, farmers have told Reuters, with local officials in some provinces unwilling to verify or report the disease.

By Hallie Gu and Shivani Singh