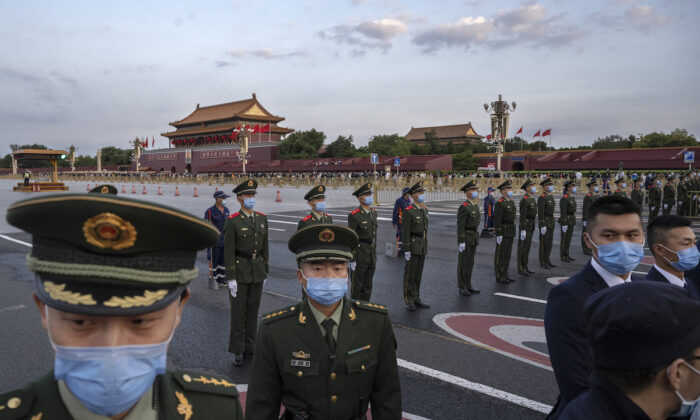 A Chinese Communist Party (CCP) publication recently published a commentary stressing the need for members to stay loyal to a “centralized and unified leadership”.

The article in Red Flag Manuscript, a bimonthly political theory journal, also criticized some former chiefs for setting up another central government, a reference harking back to the Party’s earlier history.

Current political observers see the May 10 article as an indication that the CCP is seriously divided, with leader Xi Jinping’s power being constrained and dispersed.

The article began by stating that “a centralized and unified leadership” is the “supreme principle” of the Party, which is said to be bolstered as “a mutual political obligation” of all the cadres.

The wording “centralized and unified leadership” appears 39 times in the full text.

If the Central Committee does not carry out what it has decided, “if each member still speaks and does its own thing, then nothing will be done,” as said Xi as quoted in the article.

The article also named early leaders in CCP history such as Zhang Guotao and Wang Ming, while criticizing Zhang for “setting up another Central Committee” and Wang for his “rightist mistakes.”

Both Zhang and Wang were rivals of Mao Zedong during the 1930s.

Although deceased for decades, Zhang and Wang have frequently emerged in official news media as cases of counterfactuals in Xi’s era.

In an article published on Aug. 15, 2021, the CCP-run Qiushi website compiled an array of comments, specifically listing that Zhang “used the military setting up a separate central committee” and that Wang had “ganged up and acted in his own way” within the CCP, disobeying the direction of the Party Central Committee.

On June 25, 2021, before the CCP high-level meeting in Beidaihe, the official media published intensive articles criticizing Zhang and Wang, calling them “ambitious” and “making independence” from the Central Committee, a negative example of “splitting” and “threatening the CCP.”

Zhang, one of the founders of the CCP and the People’s Liberation Army, built up a second Central Committee in 1935 which later announced the expulsion of Mao and other chiefs from the Party.

Mao, however, defeated Zhang and became the first leader of the CCP regime. He recalled the struggle with Zhang as “the darkest moment of his life” in an interview with American author Edgar Snow in 1960. “At that time, the Party was facing a split, and there was even the possibility of a civil war with an uncertain future,” Mao said.

Zhang was expelled from the Party on April 18, 1938, and he then joined the opposition Kuomintang. With his family, he went into exile to Hong Kong in 1948. Zhang eventually went to live in Canada in 1968 where he died in 1979.

Wang, another political rival of Mao, whose proposal to unite with the Kuomintang against Japan’s invasion was concluded by the CCP as a “rightist and surrenderers mistake.” Wang later went to the Soviet Union for medical treatment in 1956 and resettled there until his death in 1974.

Overseas political commentator Lu Tianming told The Epoch Times that the official media has begun a recurring critical model targeting the so-called “another Central Committee” which connotes a similar situation occurring in the top echelons of the CCP. That is, someone is eyeing Xi’s central power.

The rift within the Party may intensify to some extremely serious extent, Lu said.

While bashing the setting up of another central government, the article stressed a series of “internal rules and regulations” that the CCP formulated earlier in 1938, saying all work of the Party be “centrally led by the Central Committee” and that Party members at all levels “must implement them unconditionally.”

Those regulations were made to govern the party with decisive authority, said Mouthpiece CCTV on Dec.21, 2021.

In addition, the Party constitution is used to provide a basis that CCP members must be absolutely subordinate to the policies of the Central Committee.

“The Communist Party constitution is a gangster’s rule, which does not talk about right and wrong, but makes people blindly obey the party leader’s orders,” Lu said.

But except for this, Xi actually has no other way of convincing other senior Communist Party officials, including those behind him, to support and implement his decisions—support for Russia and enforcement of the Zero-COVID policy nationwide—that have brought negative consequences in China and placed him under considerable pressure within the CCP, according to Lu.

Lu noted that the article itself was not published in a high-ranking party media, but only in a semi-monthly magazine, “which also indicates that Xi may not have as much influence in his position anymore, with part of his privileges restrained and dispersed.”

Compared to the solely centralized power during the Mao era, Xi has found himself lagging far behind, Lu said, adding that Xi has therefore been trying to seek from Mao ways to consolidate the Communist Party’s rule.

But “the support of the CCP is obviously looking slim,” Lu said.