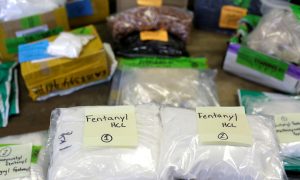 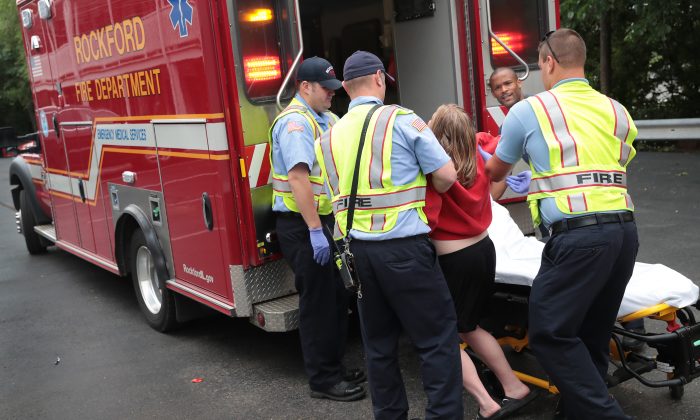 Behind the deadly opioid epidemic ravaging communities across the United States lies a carefully planned strategy by a hostile foreign power that experts describe as a “form of chemical warfare.”

It involves the production and trafficking of fentanyl, a synthetic opioid that caused the deaths of more than 32,000 Americans in 2018 alone, and fentanyl-related substances.

China is the “largest source” of illicit fentanyl in the United States, a November 2018 report by the U.S.-China Economic and Security Review Commission stated. That same commission said that since its 2017 report, they found no “substantive curtailment” of fentanyl flows from China to the United States. They also noted that in “large part, these flows persist due to weak regulations governing pharmaceutical and chemical production in China.”

Jeff Nyquist, an author and researcher of Chinese and Russian strategy, said China is using fentanyl as a “very effective tool.”

China also uses the money generated by the importing of fentanyl to effectively “influence political parties,” according to Nyquist.

“It opens doors for Chinese influence operations, Chinese People’s Liberation Army, and intelligence services, so that they can get control of certain parts of the U.S.,” he said.

In August, Trump called out Chinese leader Xi Jinping, accusing him of not doing enough to stop the flow of fentanyl, which enters the United States mostly via international mail.

Liu Yuejin, vice commissioner of the China National Narcotics Control Commission, disputed Trump’s criticism, telling reporters on Sept. 3 that they had started going after illicit fentanyl production, according to state-controlled media. China also denies that most of the illicit fentanyl entering the United States originates in China.

“President Xi said this would stop—it didn’t,” Trump said on Twitter on Aug. 23.

Overdose deaths from synthetic opioids such as fentanyl surged from around 29,000 in 2017 to more than 32,000 in 2018, according to data from the Centers for Disease Control and Prevention (CDC).

Not all opioid-related deaths in the United States can be blamed on China’s fentanyl export policies, as some come from prescription overdoses, according to Dr. Robert J. Bunker, an adjunct research professor at the U.S. Army War College Strategic Studies Institute.

But Bunker told The Epoch Times that China is still “greatly contributing” to America’s opioid epidemic. Bunker described how Beijing is using the trafficking of dangerous drugs to achieve its greater Communist Party goals.

“Contributing to a major health crisis in the U.S., while simultaneously profiting from it would in my mind give long-term CCP plans to establish an authoritarian Chinese global system as a challenge to Western liberal democracy,” he said via email.

“[It’s] a win-win situation for the regime,” he continued. “In fact producing and sending fentanyl to the U.S., which could be considered a low-risk policy of ‘drug warfare,’ is very much in line with the means and methods advocated in the 1999 work ‘Unrestricted Warfare.'”

The book mentioned by Bunker is authored by two of China’s air force colonels, Qiao Liang, and Wang Xiangsui, and published by the People’s Liberation Army.

Fentanyl has been approved for treating severe pain for conditions such as late-stage cancer. It is prescribed by doctors typically through transdermal patches or lozenges. Fentanyl should only be prescribed by doctors who are experienced in treating pain in cancer patients, according to Medline Plus, an online site by the United States National Library of Medicine. It may become addictive, especially with prolonged use.

A USPS spokesman told The Epoch Times they are “aggressively working” to add in provisions from the STOP Act. The Synthetics Trafficking and Overdose Prevention legislation, signed in 2018 by Trump, aims to curb the flow of opioids sent through the mail while increasing coordination between USPS and the U.S. Customs and Border Protection (CBP).

USPS has notified China’s postal operations that if any of their shipments don’t contain Advance Electronic Data (AED), they “may be returned at any time,” the spokesman said via email. CBP is also notifying air and ocean carriers to confirm that 100 percent of their postal shipment containers have AED before loading them onto their conveyance.

In August, law enforcement seized 30 kilograms (around 66 pounds) of fentanyl, among other narcotics as part of a major arrest operation over the course of three days. As a result, officers arrested 35 suspects for “conspiracy to distribute and possess with intent to distribute large amounts of heroin, fentanyl, cocaine, and cocaine base.”

G. Zachary Terwilliger, U.S. Attorney for the Eastern District of Virginia, said in a statement that the amount of fentanyl seized was enough to “kill over 14 million people.” One of the suspects in Virginia had ordered the fentanyl from a vendor in Shanghai and was receiving it at his residence through USPS, according to the indictment.

“The last thing we want is for the U.S. Postal Service to become the nation’s largest drug dealer, and there are people way above my pay grade working on that, but absolutely, it’s about putting pressure on the Chinese,” Terwilliger said.

Also, in August, the Mexican navy found 52,000 pounds of fentanyl powder in a container from a Danish ship that was coming from Shanghai. The navy intercepted the unloaded 40-foot container on Aug. 24, at the Port of Cardenas.

“There is clear evidence that fentanyl or fentanyl precursors, chemicals used to make fentanyl is coming from China,” Dr. Andrew Kolodny, co-director of Opioid Policy Research at the Heller School for Social Policy and Management, told The Epoch Times.

Two commonly used fentanyl precursors are chemicals called NPP and 4-ANPP. In early 2017, journalist Ben Westhoff started researching the chemicals, finding many advertisements for them all over the internet from different companies. He later determined a majority of those companies were under a Chinese chemical company called Yuancheng, according to an excerpt from his upcoming book “Fentanyl, Inc.: How Rogue Chemists Are Creating the Deadliest Wave of the Opioid Epidemic,” an excerpt of which was published in The Atlantic.

One of the concerns related to the production of illicit opioids is the creation of fentanyl analogs, products that are similar to fentanyl and also simple to make.

“You can very easily manipulate the molecule and create a new fentanyl-like product that hasn’t been banned, that’s not technically illegal,” Kolodny told The Epoch Times. “Some of the manufacturers, the folks creating the drugs, are aware of that.”

“We saw this with other synthetic drugs that are abused in the U.S., when law enforcement make the drug illegal or when they ban the molecule,” he said. “In some cases, fentanyl analogs are even stronger than fentanyl. There’s an analog called carfentanil, which is even more potent than fentanyl.”

Carfentanil has a quantitative potency “approximately 10,000 times that of morphine and 100 times that of fentanyl,” according to the National Center for Biotechnology Information.

Just one microgram is needed for carfentanil to affect a human. The drug is “one of the most potent opioids known” and is marketed under the trade name Wildnil “as a general anesthetic agent for large animals.”

“Sometimes, it’s hard for law enforcement to keep up with the chemist,” Kolodny added.

A bill dubbed the SOFA Act or the “Stopping Overdoses of Fentanyl Analogues Act,” has yet to pass Congress. The act was introduced in May by Republican senators and would give law enforcement “enhanced tools to combat the opioid epidemic and close a loophole in current law that makes it difficult to prosecute crimes involving some synthetic opioids.”

Kolodny said pharmaceutical industries have been lobbying to stop any legislation meant to restrict fentanyl analogs “because these are products they are trying to bring to market.”

In August, an Oklahoma judge ordered Johnson & Johnson to pay $572.1 million to the state for deceitfully marketing addictive opioids. The sum was less than what investors had expected, according to Reuters, which resulted in shares of the multinational corporation rising in value.

As part of the Trump administration’s latest efforts to combat the opioid crisis, the U.S. Department of Health and Human Services (HHS) on Sept. 4 announced nearly $2 billion in funding to states.

The funding would expand access to treatment and also support near-real-time data on the drug overdose crisis, according to a release.

In announcing the move, White House counsel Kellyanne Conway told reporters in a conference call that their administration is trying to interject the word “fentanyl” into the “everyday lexicon” as part of their efforts to increase awareness.

Data suggests that of the approximately 2 million Americans suffering from opioid use disorder, approximately 1.27 million of them are now receiving medication-assisted treatment, according to the HHS.

“Central to our effort to stop the flood of fentanyl and other illicit drugs is our unprecedented support for law enforcement and their interdiction efforts,” she said.

Conway then brought up the DHS seizures of fentanyl in 2018, which totaled an equivalent of 1.2 billion lethal doses.

“Ladies and gentlemen, that is enough to have killed every American four times,” she told reporters.

Just weeks ago, the White House released a series of private-sector advisories aimed to help businesses protect themselves and their supply chains from inadvertently trafficking fentanyl and synthetic opioids.

In March 2018, the Interior Department created a task force aimed to specifically combat the crisis on tribal lands. Since then, the department has arrested more than 422 individuals and seized 4,000 pounds of illegal drugs worth $12 million on the street, including more than 35,000 fentanyl pills.

Conway, on the conference call, described the epidemic of pain relievers as an “opioid and fentanyl crisis.”