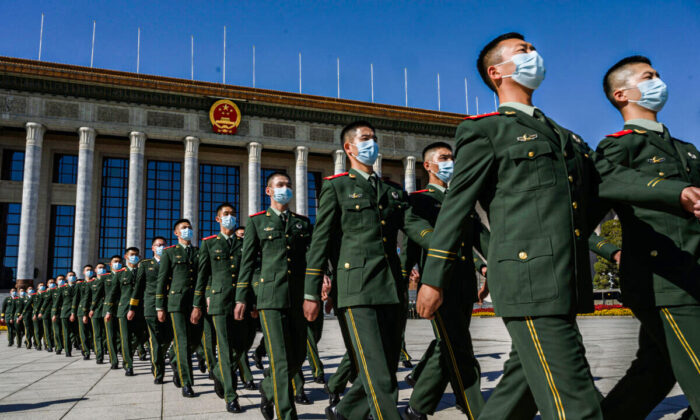 Chinese soldiers from the People's Liberation Army wear protective masks as they march after a ceremony marking the 70th anniversary of China's entry into the Korean War, at the Great Hall of the People in Beijing on Oct. 23, 2020. (Kevin Frayer/Getty Images)
Infiltrating the West

China Is Undermining the US Through Elite Capture: Author

The United States is currently traveling down a losing path in its battle against China because the communist regime has co-opted many U.S. elites in Washington, Wall Street, corporate America, and the U.S. tech sector, according to author Peter Schweizer.

Schweizer, who recently released his new book “Red-Handed: How American Elites Get Rich Helping China Win,” said his book shows how appalling it is that some of the elites have been willing to “kowtow to the regime” just so that they have access to the Chinese market.

“They should be embarrassed,” he said. “They seem to be all too happy to do the bidding for Beijing when it comes to American politics.”

Schweizer made the remarks during a recent interview with EpochTV’s “China Insider” program. He’s also the president of U.S.-based think tank the Government Accountability Institute.

“I think what’s important for people to keep in mind is that Beijing doesn’t have to lobby for its own interest, because there are so many powerful interests in the United States that will lobby on their behalf,” he said.

The present course can only lead to China replacing the United States as the world’s top superpower, according to Schweizer.

“Unless we start to take radical action, we will lose. There is no question in my mind,” he said. “We will lose because our elites will be happy to sell out, collect their money, and position themselves in elite positions for generations to come.”

That outcome doesn’t necessarily mean that the Chinese Communist Party (CCP) would occupy the United States, Schweizer said, but the United States as people know it would be very different.

“For some people who say, ‘Look, that’s not my concern,’ this should be their concern,” he said. “Life here is going to be heavily influenced by what the regime in Beijing wants.”

One of the U.S. government officials named in the book is Sen. Dianne Feinstein (D-Calif.). Schweizer wrote that the longtime senator has come to the defense of the CCP while her husband, Richard Blum, reaped profits by inking business deals with Chinese firms with ties to the Chinese regime.

In defending the Chinese regime, Feinstein compared the 1989 Tiananmen Square Massacre—where at least 10,000 people were killed by Chinese tanks and soldiers—to the 1970 Kent State shootings and the 1993 Waco siege in Texas, according to the book.

“I was appalled as anyone by the tanks at [Tiananmen] Square, but three tanks of this government went into Waco and killed 29 children,” Feinstein said during a Senate hearing. “Now those are not analogous; they are different situations. It was wrong of our government, and it was wrong of the Chinese government.”

In 1994, when the Senate was contemplating rescinding most-favored-nation trading status with China, Feinstein objected and said such a move would be “counterproductive” and would “inflame Beijing’s insecurities.”

The book also explores the relationship between Feinstein and former Chinese leader Jiang Zemin, going back to the days when they were mayors in San Francisco and Shanghai, respectively. The book quotes the Los Angeles Times stating that the relationship gave Blum “access to the normally impenetrable Beijing political system.”

In 2000, Kam Kuwata, who was Feinstein’s spokesperson at the time, was quoted in SFGate saying that Blum “has a right to do business and he’s never done anything wrong.”

“Beijing is very sophisticated in appealing not only to the pocketbooks of these players, but also to their egos,” Schweizer said, pointing to Microsoft founder Bill Gates as an example of the latter.

In 2006, China’s state-run media outlet People’s Daily Online named Gates as one of 50 foreigners shaping “China’s modern development.” According to his book, Gates was the only true technologist on the list.

“He’s a member of something called the Chinese Academy of Engineering (CAE), which sounds sort of friendly and nonpolitical. It’s actually, of course, an organization run by the [Chinese] Communist Party, and its goal is to advise the Chinese government on technology policy,” Schweizer said.

Gates was one of 18 foreigners selected by the CAE to be one of its lifetime members in 2017, according to People’s Daily Online. The media outlet reported that the foreigners would “improve CAE’s status in the field of engineering.”

CAE supports the Chinese regime’s policies. In a 2018 article published on its website, CAE’s party committee stated that it had provided “important scientific support” to the regime’s industrial blueprint of “Made in China 2025,” while endorsing its “Military-Civil Fusion” strategy and “Belt and Road Initiative.”

In June 2021, Microsoft was in the middle of controversy when its search engine Bing yielded no results when users in several countries—including the United States—entered the query “tank man,” the iconic unidentified man who was pictured standing in front of a line of tanks leaving Tiananmen Square in 1989. Microsoft’s explanation for the empty search result, “accidental human error,” drew criticism from human rights organizations.

In short, the Chinese regime doesn’t care if U.S. politicians are Republicans or Democrats, as long as they’re willing to do Beijing’s bidding, according to Schweizer.

“They don’t mind if American politicians talk about the Uyghurs occasionally, or say we should have a diplomatic boycott,” he said. “They’re fine with that.”

“That is the strategy they’re employing.”

The Commission on the Theft of American Intellectual Property estimated in 2017 (pdf) that the U.S. economy suffers an annual loss of between $225 billion and $600 billion due to China’s intellectual property theft each year.

In 2021, FBI Director Christopher Wray said the agency is opening one new China-related counterintelligence case every 10 hours and has about 2,500 active investigations across the United States.

“My sense of what people have to understand is the nature of the Chinese regime is such that it cannot be trusted,” Schweizer said. “And I don’t think it can be trusted in its relationship with us, and we need to keep that in mind with everything.”

The Bill and Melinda Gates Foundation and Feinstein’s office didn’t respond to a request for comment by press time.