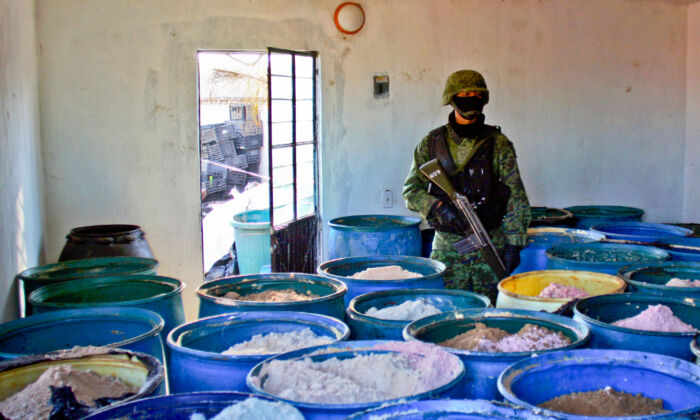 Behind the illicit flow of drugs into the United States and the violence waged in Latin America by criminal cartels, the Chinese regime is hard at work. For drug cartels and narcoterrorist groups, the Chinese regime has become the leading source of synthetic drugs and precursors for drugs like methamphetamine, and a leading source for the weapons used by those in the drug business.

Many of these drugs are wreaking havoc on the bodies and minds of users and their communities—with some causing long-term psychotic behavior, and others linked to overdose and death.

For example there are more than 150 publicly listed Chinese chemical companies selling the drug alpha-PVP, also known as “flakka,” according to New York Times. Flakka is replacing cocaine use in Florida, and has been the cause of at least 18 deaths and numerous bizarre arrests in the state.

As for methamphetamine, a 2012 national survey found there are an estimated 1.2 million users in the United States, according to the National Institute on Drug Abuse. Side effects of the drug include “significant anxiety” and violent behavior, and “psychotic symptoms can sometimes last for months or years.”

These drugs, and many others like them, have a critical feature in common: they, or the otherwise controlled chemicals used to make them, originate in China—and for years Chinese regulators have shown little interest in helping stem the flow.

“The Chinese role is that of a facilitator to Mexican and Latin American organized crime activities,” said Dr. Robert J. Bunker, adjunct research professor at the U.S. Army War College, in an email interview.

The Chinese Communist Party (CCP) has found its way into both legitimate and underworld markets in Latin America, according to Bunker. “Combine these with their linkages to pariah regimes in the region, such as Venezuela, and their interactions with Hezbollah and Iranian operatives,” Bunker said, “and we end up with a ‘Star War’s Bar’ type of scenario.”

In the famous bar scene from the 1977 film, the character Obi-Wan Kenobi says, “you will never find a more wretched hive of scum and villainy.”

It’s a situation, Bunker said, where the Chinese regime “via its sizeable number of corrupt officials—many with organized crime linkages—will basically sell anything, or provide any kind of service at this point to make a profit: weapons, precursor drugs, cloned goods, gambling, and money laundering.”

There is more to the drug war than meets the eye. “Recent Chinese doctrine articulates the use of a wide spectrum of warfare against its adversaries, including the United States,” according to an Oct. 13, 2014, report from U.S. Army Special Operations Command.

“Drug warfare” is one piece of this “wide spectrum of warfare,” the report states, noting that it ties to a broader Chinese military strategy meant to “destabilize an adversary.” It falls under the umbrella of “culture warfare,” which is an unconventional warfare strategy meant to decay the moral fabric of a rival nation, and thereby weaken it.

For communist regimes including the CCP, the use of drug warfare against their adversaries isn’t anything new. In his book, “Red Cocaine,” last updated in 1999, Joseph D. Douglass detailed the history of the strategy.

He writes communist regimes “have been using narcotics for several decades as a decisive weapon in the ongoing low-level warfare they are waging against Western civilization,” and adds, “During the five years to 1990, for instance, data and other source testimony were forthcoming linking almost every Communist country to drug trafficking.”

The strategy was exposed many times over by high-level officials defecting from the Soviet Union—including Czech defector Gen. Jan Sejna. Its use was also detailed in the Stalin-era “The Communist Manual of Instructions on Psychopolitical Warfare,” which can now be found in the public domain.

Drug warfare was used by the British during the Opium Wars against China in the 19th century, which led to China ceding control of Hong Kong to British rule in 1841, and later helped lead to the collapse of the Qing Dynasty in 1912.

For the CCP’s founder, Mao Tse-tung, opium was a weapon to be used in his efforts to gain control over China. Douglass writes that in 1928 Mao instructed one of his subordinates, Tan Chen-lin, to “begin cultivating opium on a grand scale.” This was a push both to gain needed supplies and to drug noncommunist states.

After the CCP established its control, Douglass wrote, “opium production was nationalized and trafficking of narcotics, targeted against non-Communist states, became a formal activity of the new Communist state.”

That “formal activity” never ended—despite being exposed by separate investigations in Japan and the United States in 1951.

But today, the drug warfare that in the past was done in a cloak and dagger fashion is now done openly.

For drug cartels, China is the main source of precursor chemicals, including ephedrine and pseudoephedrine used to make the drug methamphetamine. It is also the main source of other synthetic drugs, many of which can be ordered online directly from Chinese laboratories. Most synthetic drugs are difficult to categorize—and to regulate—because Chinese labs change their chemical makeup to dodge U.S. laws.

The use and addiction to methamphetamine and other synthetic drugs is growing in the United States—since they’re often inexpensive, easy to get, and can mimic the effects of other drugs on the market. There are synthetic clones of just about every illegal drug on the market.

While the CCP has arrested some groups selling the drugs on their own soil, according to PBS, the drugs for exports are still “being manufactured in the open.”

The CCP’s policy on these chemicals has allowed illegal drugs to thrive abroad. Mexican cartels produce more than 90 percent of the methamphetamine used in the United States, and 80 percent of that same methamphetamine is produced using ingredients from China, according to the Drug Enforcement Administration.

“China has become the top supplier to Mexican traffickers due to loose regulations on its chemical manufacturing and export industry,” a Drug Enforcement Administration official told Stars and Stripes.

The traffickers produce methamphetamine using up to 30 chemical ingredients—many of which are produced under tight regulations in the United States and elsewhere—but in China, only one of those 30 chemicals is regulated, according to Stars and Stripes.

Mexico has tried cooperating with the Chinese regime to stem the flow of drug ingredients, but were told Mexico would have to deal with it themselves. Jorge Guajardo, Mexico’s former ambassador to China, told The New York Times “In all my time there, the Chinese never showed any willingness to cooperate on stemming the flow of precursors into Mexico.”

Brazilian political commentator and author of “The Latin America Axis of Evil and the New World Order” (O Eixo do Mal Latino-Americano e a Nova Ordem Mundial), Dr. Heitor De Paola, said in an email interview that the drugs are used for the purpose of drug warfare in Latin America, not just by the CCP, but by other communist groups as well.

On the government side, he said the practice is used by some national leaders who are part of the far-left Foro de São Paulo political conferences, as well as by narcoterror groups like FARC, and far-left “social movements” that double as guerrilla organizations.

The drugs are used, he said, “as a way of stimulating the drug addiction inside the target countries’ youth,” in order to accomplish political goals of the communist groups. Some of the groups, such as FARC, will also exchange the drugs for weapons.

The Origin of Illicit Firearms

The CCP’s support of Latin American drug traffickers, however, doesn’t end with just supplying the synthetic drugs and ingredients.

The main source of illegal firearms in Mexico is also China, “through the black market,” according to a report from Dr. R. Evan Ellis, an associate professor of national security studies in the Center for Hemispheric Defense Studies.

A problem with sourcing, Ellis stated, is that Chinese weapons are often smuggled into Mexico through the United States. His claim was backed by Luis Villegas Meléndez, a military commander in Mexico, who stated in 2008 that Chinese and Russian firearms were being smuggled across the U.S. border into Tamaulipas, Mexico.

“Chinese-manufactured grenades and other military items have been seized in Puebla and elsewhere in Mexico,” Ellis stated, yet added that it’s still unclear whether the drug cartels are buying the weapons from Chinese criminal groups, or directly from Chinese companies.

The Mexican drug cartels aren’t the only illicit recipients of the weapons either, according to a Nov. 5 report from the US-China Economic Security Review Commission.

The CCP supplies weapons directly and indirectly to groups that are “otherwise largely isolated for political reasons,” it states. Recipients of Chinese weapons range from the governments of Cuba and Venezuela, to FARC rebels in Colombia.

The proliferation of Chinese weapons in the region is a bit of a conundrum. The report states, “At the region-wide level, the degree to which Chinese state-owned arms suppliers such as Norinco take steps to ensure their weapons are not diverted to the black market is not clear.”

The CCP has fired back at accusations, claiming the sale of weapons to narcoterrorist organizations is “illegal under Chinese law,” but as the report notes, this claim is little more than hot air.

“Through means described by China’s government as legitimate,” the report states, Chinese-made arms have been found on their way to rebel groups in Colombia and South Sudan as recently as March.

Roger J. Chin, a doctoral student at Claremont Graduate University said criminal organizations are exploiting the nature of globalization, and that it is no longer just a local problem, but instead something global “with direct national security implications.”

Robert Bunker said the problems demonstrate the thinking behind Chinese business in the region. “If narcoterror in Latin America should be promoted as an outcome of such Chinese policies,” he said, “their response is ‘So be it.'”