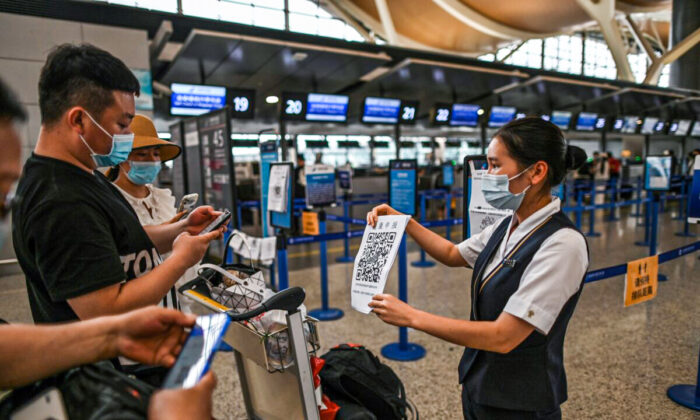 Passengers wearing facemasks check their health code with a sheet held by an aiport staff (R) before the counter area following preventive procedures against the spread of the COVID-19 coronavirus in Pudong International Airport in Shanghai, on June 11, 2020. (Hector Retamal/AFP via Getty Images)
US-China Relations

Travel Restrictions Imposed by China Prevent US Citizens From Leaving

China is restricting people from leaving the country, and even U.S. permanent residents or U.S. citizens have been caught by this campaign.

Over the course of 2021, many Chinese netizens shared on social media their difficulties when applying for passports. For those who had the travel documents, during the exit inspections at the airports, officials asked them difficult questions and carefully checked their passports and visas, some netizens recounted. One even said that their passport was torn by the inspector on the spot.

China’s National Immigration Administration (NIA) in July confirmed that the regime was tightening rules around people leaving the country.

At a press conference on July 30, 2021, the NIA, also known as the Exit and Entry Administration said, in an effort to block the coronavirus from overseas, it had implemented a series of strict measures to limit people going abroad: suspend issuing ordinary passports for non-essential, non-urgent affairs; and advising applicants to cancel or postpone travel plans if they are not essential nor urgent.

The sudden tightening of the policy disrupted many people’s plans, including Chinese citizens who had settled in America and returned to visit relatives. Netizens on social media said that passport renewal applications submitted six months earlier were not approved, thus making their departures unlikely.

A Chinese businessman living in America, Zhang Shengqi, told Radio Free Asia in August the predicament of his friend. According to Zhang, his friend, who worked at an American college, was stuck in China for a long time. The college employer submitted his application for passport renewal six months earlier but was still waiting for the result. “When he left America, his newborn baby was less than a month old, now the baby was nearly half-a-year old. His wife had to take care of the baby all by herself.”

Zhang added that even though the friend used his connections, the situation did not improve. He was uncertain when he would reunite with his family.

Towards the end of 2021, as China was battling multiple outbreaks of the Delta variant, the exit restrictions continued and went even further. A Chinese woman, who was a permanent resident of the United States, complained online in December about what happened to her at the airport when she was taking her children to America.

The exit inspector asked her how she obtained permanent resident status in the United States. She answered that she got it through asylum. The inspector pressed her for the reason for seeking asylum, leaving her unnerved and speechless. The inspector then cut her passport making it invalid, and only allowed her kids to board the plane, the woman wrote in a social media post.

Her experience prompted much discussion online. One netizen wrote: “Should people be questioned and must have a good reason when leaving a country, like when entering one?”

It also alarmed some in the Chinese diaspora in America, as many Chinese nationals hold permanent residency in the United States and are used to traveling back to China at will.

Even U.S. citizens in China could be forced to remain in the country if the communist regime deems it necessary. Under its law, the CCP authorities have broad discretion to block foreign nationals from leaving the country.

The U.S. government has repeatedly warned American citizens considering traveling to China about Beijing’s exit bans. In January 2021, the Trump administration issued a China Travel Advisory, stating that Chinese authorities may use arbitrary detention and exit bans to compel U.S. citizens to participate in its investigations, pressure their family members to return to China from abroad, and gain bargaining leverage over foreign governments.

Beijing does not recognize dual nationality, so the advisory gives special warnings to Chinese Americans. “US-China citizens and US citizens of Chinese heritage may be subject to additional harassment,” it said. Meanwhile, the Chinese government may prevent the U.S. Embassy from providing consular services, it added.

Daniel Hsu’s case is illustrative. The U.S. citizen had been barred from leaving China for four years until November 2021. The Chinese regime held him as a hostage in an attempt to coerce his father to return to China and face justice for allegedly embezzling about $63,000 more than two decades before.

Four days before President Joe Biden and Chinese leader Xi Jinping met online last month, his long-running exit ban suddenly was lifted and he was told to go back to America within 48 hours.

In another case, two American siblings had been blocked from leaving China for more than three years before coming back to America in September 2021.

Victor Liu, a college student, and Cynthia Liu, a consultant, went to China in June 2018. The Chinese authorities blocked the siblings from leaving the country and detained their mother, also a U.S. citizen, to compel their U.S.-based father, who was wanted by the Chinese police for his role in a fraud case, to return to China and turn himself in.

Their release came right after the U.S. Justice Department allowed Meng Wanzhou, the CFO of China’s telecom giant Huawei who was in Canada fighting extradition to the United States for a federal fraud case, to go back to China.