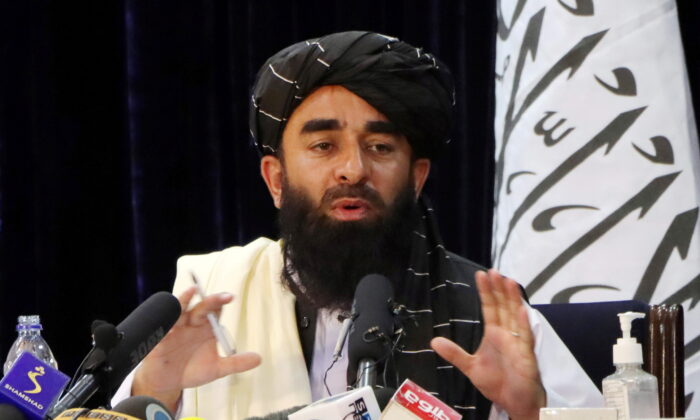 A Taliban spokesperson has praised Beijing as a “main partner” and financer as the group moves to build a national governance and develop Afghanistan’s economy.

“China is our main partner and represents for us a fundamental and extraordinary opportunity because it is willing to invest and rebuild our country,” Taliban spokesperson Zabiullah Mujahid told the Italian newspaper la Repubblica on Sept. 1.

Mujahid made the remarks as the militant group, which took over Afghanistan in dramatic fashion last month, celebrated the final withdrawal of American troops from the country, putting an end to a 20-year-long conflict.

But money has become a pressing concern for the Taliban after the United States blocked the group from accessing billions of Afghan assets held in U.S. bank accounts, while the World Bank and the International Monetary Fund have each suspended funding to Afghanistan.

With cash running short, the Taliban appears to place its bet on Beijing, which in recent days have signaled readiness to build ties with the group—although it has yet to formally recognize the Taliban regime.

Mujahid said the Taliban was “very keen” on China’s Belt and Road Initiative (BRI), a billion-dollar infrastructure project championed by Chinese leader Xi Jinping that aims to expand the regime’s economic and political clout worldwide. While Afghanistan signed its first memorandum of understanding on the BRI with Beijing in 2016, no projects have started under the plan.

The spokesperson also referenced China’s currently dormant investment in a copper mine development project in the country. “We also have rich copper mines that, thanks to the Chinese, will be able to come back to life and be modernized,” Mujahid said.

China, he added, “is our gateway to markets around the world.”

The Taliban expressed further enthusiasm for BRI involvement in a call with assistant Chinese foreign minister Wu Jianghao on Sept. 2.

In the call, Abdul Salam Hanafi, a senior member in the Taliban negotiating team, called China “Afghanistan’s trustworthy friend,” according to a readout from the Chinese foreign ministry.

Hanafi expressed a wish to “actively support and participate” in the BRI project that he said will “contribute to the region’s prosperity.”

To foster Afghanistan-China friendship, Hanafi vowed that the Taliban “will absolutely not allow any forces to threaten Chinese interests,” an implicit reference to Uyghur militants who Beijing fear may launch assaults into Xinjiang, a region bordering Afghanistan where Beijing has locked up to more than 1 million ethnic Muslim minorities in internment camps.

The Chinese regime has pledged assistance to the Taliban-ruled Afghanistan. In a Wednesday press briefing, Chinese foreign ministry spokesperson Wang Wenbin described the Taliban’s control of the country as a “new page in its history,” and said Beijing will “continue to provide utmost assistance to Afghanistan for an early realization of peace and reconstruction.”

Asked about Mujahid’s remarks on Thursday, White House press secretary Jen Psaki told reporters “there are few countries that wanted us to stay in Afghanistan more than China and Russia.”

“So, the world is united in what they expect the Taliban to do, which is allow people who want to depart the country to depart, and China has to decide where they are in that effort,” Psaki said.

The Taliban has promised to form an “inclusive government” and give amnesty to those who have fought against them or worked for the now overthrown Afghan government. But such promises have been met with skepticism both inside the country and among the greater Afghanistan diaspora.

An Afghan evacuee who worked for the government before the Taliban’s takeover found out since his escape a large group of Taliban members visited his home to demand information on his whereabouts. He told The Epoch Times that three Afghans he knew were detained and tortured by Taliban members for three days, and were released only after signing a document saying they would not leave the country nor reveal their detention and torture to the public.

In recent weeks, Beijing has leveraged the Afghanistan crisis for propaganda to discredit the United States. Its English-language media CGTN recently called for Washington to “come to terms with the Taliban,” “work with us,” and drop sanctions.

While some analysts argue that the Chinese regime has much to gain in the country by filling the void left by the United States, questions remain on whether it can maintain a workable relationship with the Taliban, whose cooperation will likely depend on the Chinese funding.

“If the CCP is unwilling or unable to provide the expected finances in time, or if China does anything that does not please the Taliban, then the Taliban will very fast bite the Chinese hands that feed them,” Frank Lehberger, a senior research fellow with India-based Usanas Foundation, previously told The Epoch Times.

Beijing, meanwhile, is grappling with the possibility of a spillover of militancy in the region around Afghanistan, where it is already facing a rise in violence directed at Chinese workers of BRI projects.

“China thinks that it can control the Taliban,” but its victory is inspiring other insurgent groups, such as Tehreek-e-Taliban Pakistan terrorist group, which is “very much opposed to China,” Gordon Chang, author of “The Coming Collapse of China,” said during a recent Epoch TV webinar.

“We can see the entire region go up in flames, in which case, China would be very much a target,” Chang added.