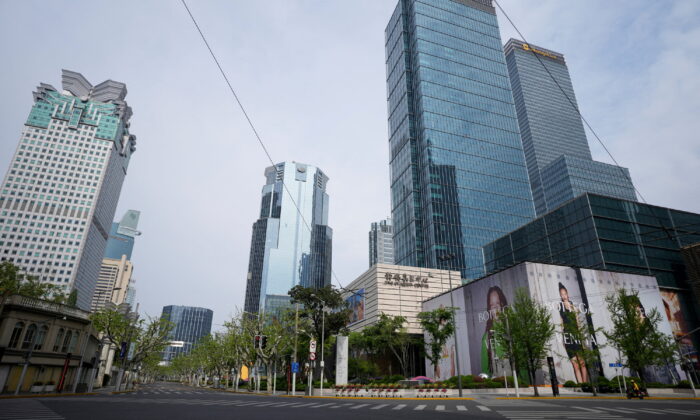 An empty road in Shanghai Central Business District during a lockdown amid the COVID-19 pandemic in Shanghai on April 16, 2022. (Aly Song/Reuters)
Thinking About China

Beijing can bend reality only so much before it must turn to reality. And what a harsh reality the Chinese Communist Party (CCP) is facing.

Beijing’s assertion that the extreme lockdowns over relatively few cases of the CCP virus wouldn’t affect the economy is, not surprisingly, proving to be false. Despite all of the CCP’s assurances about China’s economic performance, it’s now the worst since the COVID-19 pandemic began in 2020.

The latest economic reports show almost a 3 percent drop in industrial production, and retail sales tumbling by more than 11 percent in April. What’s more, unemployment is now over 6 percent, approaching the highest level since Beijing began tracking unemployment in 2018.

As China’s economic malaise continues to worsen, Western investors are minimizing exposure to an increasingly erratic investment climate. There are a few key factors causing investors to flee China, such as lockdowns, crackdowns, and slowdowns.

But in every case, the blame for the investment pullback rests squarely on the shoulders of the CCP. Many, but not all of the problems, start with or are made worse by government-enforced lockdowns.

The CCP persists in its irrational “zero-COVID” policy that forces the lockdowns of entire cities of tens of millions of people for relatively few cases of the CCP virus. Shanghai, a major financial center of 26 million people, has been under total lockdown for weeks on end. Beijing has also been under tight mobility restrictions. Manufacturing regions such as the province of Jilin in the north, to Shenzhen in the south, have also been under lockdown.

The impact on manufacturing activity and international revenue has been significant. The Caixin PMI shows that China’s services activity has seen the second-largest decline on record. Any number below 50 on the PMI means economic contraction. Its current level is 36.2. It’s no surprise that almost 60 percent of European enterprises in China expect to see falling revenues in 2022.

The Ripple Effect of Lockdowns

Of course, the lockdowns have had tremendous ripple effects across China’s economy, and no more so than in the critical real estate sector.

For example, under lockdown conditions, homebuyers are physically unable to purchase a home. The impact on home sales has been brutal, with China’s top 30 real estate markets seeing sales fall by 54 percent year-over-year this past April.

Evergrande, one of the largest real estate firms, has effectively defaulted on its debt obligations and is the poster child for the debt-laden industry. But it’s by no means an outlier. Up to 40 percent of real estate development firms in China face default. Investment groups on the ground in China now say the collapse of the country’s multi-trillion dollar real estate industry is a certainty and will be brutal.

E-commerce giant Alibaba will cut at least 15 percent of its workforce this year, resulting in the loss of some 40,000 jobs. Other tech firms will likely follow with their own downsizing.

Supporting Russia’s War Has a Cost

But lockdowns and crackdowns weren’t the only causes of falling economic activity. The Chinese regime’s support for Russia’s war against Ukraine has triggered record levels of investment outflows. In the month of March alone, China saw $17.5 billion in investment outflows, including $11.2 billion in bonds and the balance in equities.

Accompanying this, an unprecedented level of capital flight out of China is raising levels of uncertainty in the country. Beijing’s increasingly provocative behavior toward Taiwan, for example, is also worsening its diplomatic relations with foreign investors. More to the point, it’s not a regional investment retreat by foreign investors but a calculated withdrawal from China. No other emerging markets are experiencing similar outflows.

Predictably, China’s GDP target won’t be met this year. No one in China is definitively saying so, but it’s an absolute certainty. Even global analysts have conceded that GDP will fall by at least 0.5 percent, with some estimates as high as 0.8 percent.

The Beatings Will Continue Until Morale Improves

Of course, the CCP is trying to browbeat and propagandize the economy back into shape. Premier Li Keqiang is exhorting regional governors to take steps to stop the bleeding and restore some stability to the economic picture.

But there’s little that the governors and other provincial officials can really do. The challenges facing the Chinese economy are largely the result of macro policies, made at the national level in Beijing by the CCP.

It’s absurd to blame lower-level officials for the policies put into force by the CCP that continue to cause so much damage to the economy. It’s also an absurdity to expect them to provide solutions in the face of persecution by the CCP for violating its policies.