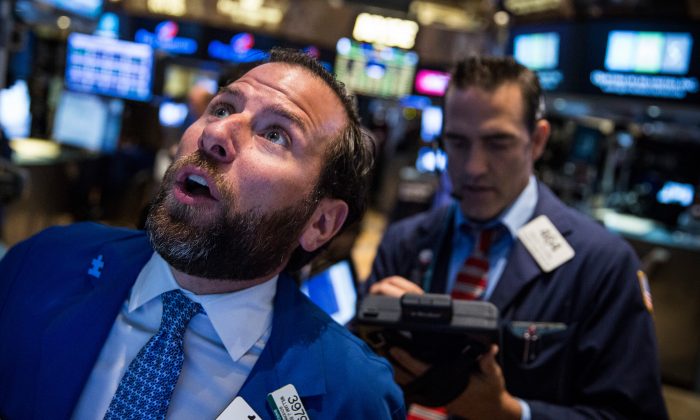 Traders work on the floor of the New York Stock Exchange during the morning of August 27, 2015 in New York City. (Andrew Burton/Getty Images)
China

Recently, the international community finally, and collectively, began to have a pessimistic view of China’s economy. Reasons for their pessimism vary. Some believe that Xi Jinping’s anti-corruption campaign has led to political instability and hence economic recession. Others believe that the Chinese regime’s intervention in the stock market directly caused an economic crisis.

But people almost never seriously consider that it’s China’s economic system that makes it difficult to sustain prosperity. Despite everyone’s wishful thinking, China has never been a Noah’s Ark, able to save the world economy.

With unemployment on the rise and tougher economic realities unfolding for China’s middle- and lower-classes, many Chinese are cracking jokes about the “China Dream,” calling it “pure illusion.”

Few Chinese are aware of the other “China Dream” that’s been circulating in the international community. This dream has been the same in Europe, America, and Africa where governments had fantasies of the Chinese government opening its big money bag and investing in their countries to boost their economies and employment.

China has actually done that. It has made large-scale investments overseas. Data from the United Nations Conference on Trade & Development (UNCTAD) indicates that China became the world’s third largest foreign investor in 2013, right behind the U.S.’s $338.3 billion and Japan’s $135.7 billion. From 2005 to the first half of 2014, China’s foreign direct investment (FDI) totaled $515.3 billion and projected investments totaled $355.1 billion.

Germany has also become a hot spot for Chinese investment. In 2012, Germany accounted for 38 percent of China’s FDI projects in Europe, far more than Britain and France combined.

According to data from Germany’s The Statistics Portal, China established 2,500 companies in Germany, creating 12,000 jobs in Germany as of the end of 2014.

The investment banking industry has gained a lot from the China market. In 2014, the industry had a record revenue of $6 billion from the world’s second largest economy. Germany’s MERICS China Research Center and the U.S. Rhodium Group jointly issued a report predicting that China will become the world’s largest cross-border investor by 2020.

My response to such optimistic predictions: The higher the expectations, the greater the disappointment. China’s recession has caused a bad mood all over the world, as the world’s expectations of China were too high.

Beijing does want to save the Chinese economy but is not able to. And the Chinese regime is indeed anxious to become the world’s No. 2 economic power.

However, that does not seem to be in the cards now.

When Xi Jinping and Li Keqiang took power, the country’s soil, rivers, lakes, oceans, and air were all heavily polluted, and the three main pillars supporting China’s economic development for nearly 30 years had shut down.

Analysts who predicted that the 21st century would be the “Chinese Century” have been unwilling to accept the fact that a country can only have sustained economic development under two conditions:

One is that such a country must have tremendous advantages in resources. This includes having good awareness of resource conservation, as well as having leading industrial systems, such as the United States and Canada do.

And, two, it must have leading-edge technology, such as the United States has at present and the U.K. had before World War II.

Both Britain and China have been referred to as “the world’s factory.” The U.K. obtained the title from its technological advantage during the industrial revolution, whereas China’s title of “world factory” refers only to being an assembly plant; it cannot be compared with the U.K.’s status at that time. Once the cost of labor and land is no longer cheap in China, international capital will flow to other places where costs are lower.

China’s prosperity, derived from being the world’s factory, relies entirely on cost advantage, namely cheap land and labor. In order to increase economic development, China has been recklessly consuming basis resources with the result that water, soil, and air are seriously polluted and minerals have been depleted. According to statistics by the National Development and Reform Commission, China has 118 resource-exhausted cities—about 18 percent of all cities—impacting a population of 154 million.

Another important point is that China has money to invest abroad because Beijing prints money. It has thus earned another title: the world’s largest money-printing country.

In January 2013, China’s 21st Century Business Herald conducted a statistical analysis of the 2008–2012 M2 data of the world’s major central banks. The conclusion was: Since 2009, China Central Bank’s money supply had surpassed Japan, the United States, and the eurozone. China became the world’s largest “money machine.” In 2012, the world’s new money supply was over 26 trillion yuan, with China accounting for nearly half of it.

China has been opened up to the rest of the world for nearly 40 years. Before 2008, developed countries all dreamed about China becoming their investment paradise and the largest commodity market. But after they discovered China’s investment environment to be far less than ideal, they left one after another.

After the 2008 world financial crisis, many countries again put their hopes in China, this time to save the global economy. However, those people intentionally ignored the fact that, compared with the countries who wanted to be “saved,” such as the EU, New Zealand, or South Africa, China is a much poorer country, having over 800 million people who are spending less than $2 per day. In addition, there is extreme environmental pollution and little or no welfare benefits.

A Jan. 22, 2015, Chinese language article by the Wall Street Journal titled China’s Capital Is on the Move  once again evoked this “China Dream,” saying: “We need a Bretton Woods Three to get global growth going with China providing the capital and the U.S. again absorbing a substantial portion of it.”

This dream is completely absurd. We are just now witnessing the beginning of China’s economy sliding into long-term recession.

This is an abridged translation of He Qinglian’s article published on her personal blog. He Qinglian is a prominent Chinese author and economist. Currently based in the United States, she authored “China’s Pitfalls,” which concerns corruption in China’s economic reform of the 1990s, and “The Fog of Censorship: Media Control in China,” which addresses the manipulation and restriction of the press. She regularly writes on contemporary Chinese social and economic issues.