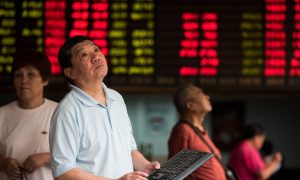 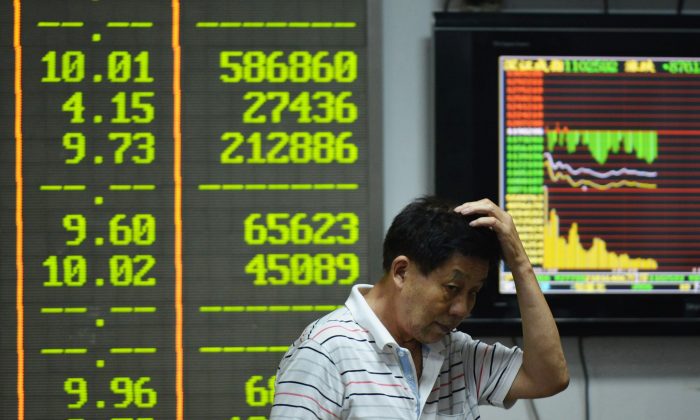 An investor gestures in front of screens showing share prices at a securities firm in Hangzhou, in eastern China's Zhejiang province on Aug. 24, 2015. (STR/AFP/Getty Images)
Business

Be careful what you wish for. In China’s case it wanted market forces to have increased dominance in its centrally planned economy. That works great on the way up, but many people forget there is a way down as well.

The reason: The authorities have really given up on the market. Previously they had defended the 3500 level as rock bottom, which was gone in a second today.

Market players had pleaded for more central bank intervention last Friday so it is almost surreal the People’s Bank of China did not follow through with the demand for further rate cuts. It also didn’t use any of the $300 billion earmarked to support the stock market ($160 billion of which has already come and gone).

There are several possible reasons why the authorities did not continue to support the stock market.

Of course, many of the highly leveraged and uneducated speculators in the Chinese market stayed in it precisely because the authorities said they would support prices. Now they have lost all hope and are selling faster than you can say “margin call.”

But not only Chinese are selling. At the Monday open, U.S. futures were limit down and the stock market had to be halted because of steep price declines (5 percent for the Dow Jones Industrial Average for example.)

Despite the fact China is relatively disconnected from the world financial system, the surprise devaluation, the stock market crash, and the dismal economic data have spooked international investors.

They are pulling money out of risk assets, such as equities and are putting them into U.S. and German government bonds. They are also pulling money out of high yield countries they used to invest in for a good return (China, emerging markets, United States) and are moving the cash back to home or the place they borrowed it from.

This is the famous carry trade unwind and today even the dollar is down because of it and the euro and yen are going up.

Once started, the wholesale liquidation is hard to stop, because it leads to a cascade of margin calls across the globe and central banks like the Fed and the People’s Bank of China will be called to action again.