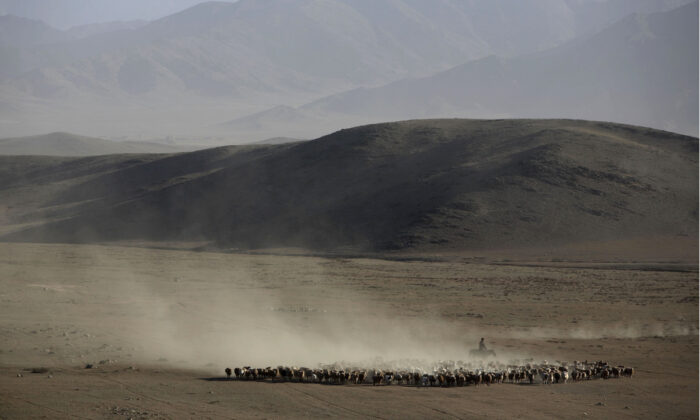 A landscape in Altay Prefecture, Xinjiang Uygur region, China, on Sept. 18, 2007. China's new G216 highway starts from the international border with Mongolia at Hongshanzui Port in Altay County and goes all the way through the Xinjiang desert till the south to Tibet. (China Photos/Getty Images)
Military

China is Building a New Strategic Road Linking Tibet and Xinjiang That Should Concern India: Experts

NEW DELHI–China is working to link the regions of Tibet and Xinjiang with a new road named “G216” that’s set to bring the greatest strategic challenge to India since the 1950s, according to experts.

“The G216 highway is rarely mentioned in the Chinese media; it is one of China’s most secret projects,” Claude Arpi, an author and expert on Tibet, wrote in a March 15 op-ed in First Post.

“[T]he new road will one day link the two restive regions of Xinjiang and Tibet and become an alternative for the G219 (or Aksai Chin) Road, which was built on Indian territory in the early 1950s.”

The G216 is set to cut through the disputed territory of Aksai Chin, a region administered by China as part of the Hotan prefecture in Xinjiang. It is claimed by India as part of its Ladakh region.

The construction of the new road, which would give an alternative to the current G219 road that connects Tibet and Xinjiang, will be a concern for India due to the advantages it would provide to the Chinese military, the People’s Liberation Army (PLA), according to Frank Lehberger, a Germany-based sinologist.

“When fully operational, G216 will provide easy and fast access from the east to PLA, in case G219 (running closer to the Indian border, i.e. Aksai Chin) is disrupted or occupied,” Lehberger told The Epoch Times.

“PLA can quickly resupply units from garrisons in Xinjiang to the north, which previously was only possible via G219, the highway which takes a huge detour west,” he added.

This advantage presents a particular challenge to India in light of heightened border tensions between the two countries in recent years. In 2020, Indian soldiers engaged in a bloody clash with the PLA in the disputed Galwan Valley region over the construction of border infrastructure by Beijing. India lost 20 soldiers in the conflict.

In early summer 2020 just days before the Galwan clash, huge PLA military convoys clogged the G219 section near Aksai Chin for days which prompted angry Chinese civilian motorists, who had been forced off the road, to post pictures and videos of the convoy on Chinese social media, according to Lehberger.

“This was a sure sign that the PLA was planning a major military operation somewhere on the [disputed border] in Ladakh,” Lehberger said.

“Based on this publicly available material, I was able to warn people in India via my social media page that something major was about to take place on the [disputed border],” he added.

“With G216 fully operational, it would be much more difficult for anyone to spot future war preparations by China.”

Arpi said in his article that he was able to confirm the existence of Beijing’s construction of G216 from clues from captions used in a pictorial article posted by Chinese Communist Party (CCP) mouthpiece People’s Daily showcasing Tibet’s natural landscape.

The pictorial article described the beauty of the Ngari prefecture, the westernmost region of Tibet that borders India.

The construction of G216 was an old dream of the first CCP leader Mao Zedong who considered it a national priority to discover a route between Tibet and Xinjiang. The plan was however dropped after a large number of workers building the road were killed en route when a volcano in the region erupted in May 1951.

“But Chinese leaders never forget the dreams of their predecessors. Today, one of the most secret projects of President Xi Jinping is to open a new link between Xinjiang and Tibet,” Arpi wrote.

The new road G216 will run south from the international border with Mongolia at Hongshanzui Port in Altay County, located at the northern tip of the Xinjiang region. It’ll cross the Xinjiang desert to the south at the border with Tibet.

Then in Tibet, it will run south through several countries and end at the Nepal border, according to China’s “National Highway Network Planning (2013-2030)” document.

Lehberger said G216 is already operational at some places and cuts through the Tarim Basin, a desert region in Xinjiang, as well as the north Tibetan area known as the Chang Tang, a high-altitude plateau known for its harsh quasi-Arctic climate.

Chang Tang occupies basically the entire north of the Tibetan region, about 900 miles from east to west until the border with Xinjiang. The western tip of Chang Tang extends into Ladakh in India.

“The highway cuts travel time from Xinjiang Urumqi to Western Tibet … and the Nepalese border, but not the border with India,” said Lehberger, adding that it could give the Nepalese direct access to Central Asia and Russia.

Arpi had said earlier in a 2018 op-ed that G216 could bring immense economic repercussions for India because it could become a conduit of a new trading route linking Central Asia with Nepal and South Asia.

He added that the Chinese regime was furthering its economic development plans for Tibet, which included increased tourism traffic to its Ngari prefecture and the construction of a new airport in western Tibet.

This implies that the Tibetan region could become a major economic as well as tourism hub, and also a strategic center for China’s defense of its borders, Arpi said.

Lehberger said the Indian territory of Ladakh and Galwan, where the soldiers of India and China clashed in 2020, is farther west and not in the immediate range of G216. However a future east-west highway, not yet built, that would link G216 from Tibet’s Gerze directly west to G219 in Tibet’s Rutok, could change that situation.

“Between Minfeng county in southern Xinjiang and Gerze country in western Tibet is the deserted Chang Thang nature reserve, there G216 seems still unfinished. This is due to the difficult high altitude terrain, consisting of large tracts of swampy ground or thawing permafrost,” he said, adding that he isn’t aware of the specific progress on the project.