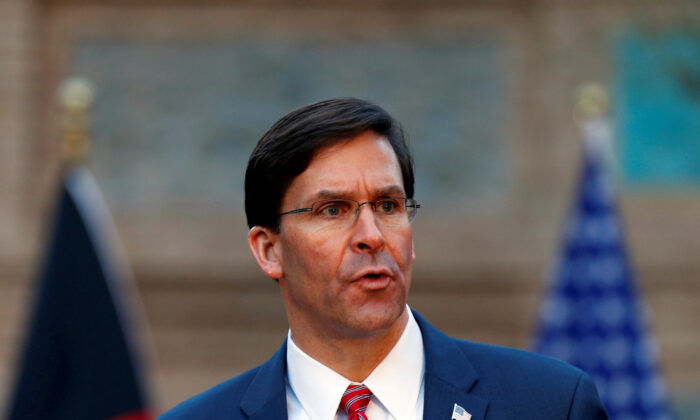 China’s communist regime is the greatest foreign threat facing the United States, according to former U.S. Defense Secretary Mark Esper, who also said that it should be considered an adversary.

“Today, I would describe [the Chinese regime] as our adversary,” Esper said during a July 14 talk at the Brookings Institution, a Washington-based think tank. “To me, it’s clear that’s what they are.”

Esper said that there are innumerable potential conflicts that could erupt in the Indo–Pacific, many of which could involve China and would carry global significance if allowed to boil over. As such, he said, the United States needs to maintain vigilance in its mission to deter aggression by the Chinese Communist Party (CCP).

“China is still our most lethal, dangerous adversary out there,” he said.

Notably, Esper said that northeast Asia could be the most volatile place on earth because of the intermingling of complex and powerful economic, diplomatic, and military actors. The United States, China, and Japan, he noted, are the three largest economies on earth.

“Any type of conflict involving those three countries is going to ripple globally,” he said.

He added that Taiwan and South Korea are both bastions of technological advancement in their own right. China and North Korea, meanwhile, are both nuclear-armed communist powers looking to expand their influence.

“The greatest strategic flashpoint in the world is northeast Asia,” Esper said.

“We have to look at that and pay attention to it and keep it under control as best we can.”

To that end, Esper said that it’s imperative the United States take a proactive role to manage and deter the most pressing scenarios for potential conflict.

Taiwan in a ‘Fight for Survival’

Although the CCP, which currently rules mainland China as a one-party state, maintains that Taiwan is a breakaway province, the island has been self-governed since 1949 and has never been controlled by the CCP.

While relations between the two powers have never been friendly, Esper said that recent efforts by the CCP to press expansionary claims in the region are a cause for concern. Specifically, he said that the regime’s efforts to behave as if there were no international waters between the two entities is worrying and reflects a broader conflict between Taiwan’s democratic way of life and China’s communist aggression.

“This comes down to communism versus democracy,” to “the international rules and norms and values that we all share as democracies and a different view being perpetrated by China on the world,” he added.

Esper said he doesn’t believe China is capable yet of making a direct amphibious assault on Taiwan but that the danger is growing. He said that he would visit the island state soon, to encourage Taiwan’s leadership to continue investing in asymmetric weapons systems and broaden its conscription practices in order to better deter CCP aggression.

He added that a majority of the island’s people consider themselves to be Taiwanese rather than Chinese, and that any war over Taiwan’s independence would necessarily be a war for the survival of the Taiwanese people.

“I want to believe that any people will fight for their own survival, and a Chinese invasion would be for survival, because there’s no such thing as ‘one country, two systems,'” Esper said. “That’s already been disproven by Hong Kong.

“Unlike Ukraine, if you get invaded by a big neighbor, there’s no crossing over into Romania or Poland or somewhere. You’re on an island.”

In terms of what the United States can do to prevent such a disastrous war from erupting, Esper said that strategic ambiguity, the longstanding U.S. policy of neither confirming nor denying whether it would defend Taiwan from an invasion, has “run its course.”

As such, he said, Congress should debate the issue and hold a vote to end the policy. Further, he said, it’s vital that the United States stake out an unambiguous stance against tyranny to dissuade further expansionary aggression by the CCP.

“At the end of the day, if you don’t stand up to countries, autocracies like China, they read it as a green light,” Esper said.

“At some point, you’ve got to stand up and say we’re not putting up with this anymore.”

When asked whether he believed regime change would be required in China before peaceful relations could be assured, Esper said that the person currently leading China is of greater importance than the form of government that exists there.

CCP leader Xi Jinping has taken China in a “much darker direction” since coming to power in 2012, Esper said. Positive relations aren’t likely to be renewed between China and the United States until Xi is out of power, he said.

Strategy Must Address Threats, Not Challenges

Esper commented on the legacy of the 2018 National Defense Strategy, which first identified China as the nation’s “pacing threat.” That language, he noted, apparently was watered down by the Biden administration, which has thus far refrained from casting the CCP as a U.S. adversary.

“When I became secretary of defense in 2019, my focus was warfighting,” Esper said. “That’s the mission of the United States military: to fight and win our nation’s wars.”

Current Defense Secretary Lloyd Austin “has continued the notion of China as our pacing threat, although they now call it the ‘challenge,'” Esper said.

Current leadership still carries important parts of the Trump administration’s groundwork for a China strategy forward in spirit, he said, but could do more. National strategies, he said, are easy to write well, but only implemented with great difficulty.

“You’ve got to give the Trump administration credit, I think, for finally consolidating and forming consensus within the United States government that China was our strategic competitor,” he said.

Still, given the stakes, Esper said the current administration isn’t delivering fully on the promise of the strategy.

“Too often, strategy documents get caught up in buzzwords and catchphrases that don’t have much meaning. It’s hard for people to understand and implement,” he said.

To that end, he criticized the current administration’s failure to release an unclassified version of its own defense strategy, which has only been briefly described publicly by way of congressional testimonies.

“I don’t have a good sense of what the lines of effort are. There’s talk about ‘campaigning’ and ‘integrated deterrence,’ but those are just words. You’ve really got to dig deeper.”

He said that it’s integral to make known the nation’s overall strategy to ensure that its people and allies understand what’s being sought strategically and why the government and military are making their decisions.

Most importantly, Esper said, the administration needs to be clear on its strategy for contending with China, in terms of ensuring peace and pursuing continued U.S. success.

“We shouldn’t be looking for a fight with China,” he said. “What we should be looking to do is to shape China’s ascent in a way that’s more positive for the Indo-Pacific region and globally.”