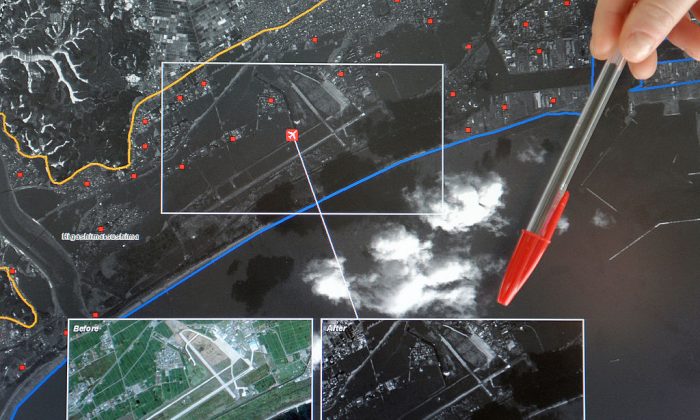 A technician shows with a pen a satellite image of Japan at the Regional Service of Image Treatment and Remote Sensing (SERTIT) in Illkirch Graffenstaden, eastern France, on March 15, 2011. (Frederick Florin/AFP/Getty Images)
US-China Relations

China Is Advancing Artificial Intelligence Technology to Fool US Satellites

China is advancing a type of artificial intelligence that can fool U.S. satellites into seeing things that aren’t there.

The emerging technique is known as generative adversarial networks (GANs), which involves a computer network creating fake images to trick analytical computers into believing that the images are real.

This has military repercussions since the U.S. military relies on automated image analysis to screen large volumes of satellite images. The analysis systems could be fooled by intentionally doctored images generated by Chinese computer networks, according to a U.S. intelligence official.

As an example, Myers stated that an image analysis might wrongly conclude from a doctored image that there is a bridge across a river, when there isn’t one in real life.

“So, from a tactical perspective or mission planning, you train your forces to go a certain route, toward a bridge, but it’s not there. Then there’s a big surprise waiting for you,” Myers said, according to defense news website Defense One.

He added that China is currently the leader in GANs, and the process to defeat GANs is time-consuming and costly.

Beijing has laid out a detailed plan to become the world leader in artificial intelligence (AI).

In 2015, China announced its industrial plan of “Made in China 2025,” with the goal of transforming China into a high-tech manufacturing powerhouse by 2025, including in sectors such as artificial intelligence and big data.

The plan envisions a three-step process for China: to keep pace with AI technology and applications by 2020, become a world leader in AI tech by 2025, and the center of AI innovation by 2030.

The plan also explains that China must be able to develop indigenous AI industries, including smart robots, smart delivery tools, and smart software and hardware—including graphics processing, pattern recognition, and machine translations—all of which are key areas to advancing GANs.

“China is by far the United States’ most ambitious competitor in the international AI market,” stated a U.S. Congressional Research Service (CRS) report published in January this year.

Yet, some American AI technology is being funneled to China. According to the CRS report, China invested an estimated total of $1.3 billion in American AI companies between 2010 and 2017, “potentially granting [Beijing] lawful access to U.S. technology and intellectual property.”

The report also pointed out that, in 2017, Beijing created a Military-Civil Fusion Development Commission to speed up the transfer of AI technology from commercial companies and research institutes to the Chinese military.

Myers also warned of another danger: open-source images that are easily accessed by the public can be corrupted. For example, mapping on the Google Maps app is susceptible to infiltration by GANs.

Defense One’s report warned that the compromise of open-source data and images could “erode the public credibility of the national security community and the functioning of democratic institutions.”

Meanwhile, Andrew Hallman, head of the Central Intelligence Agency’s Digital Directorate, said at the same summit: “We are in an existential battle for truth in the digital domain,” according to the Defense One report.