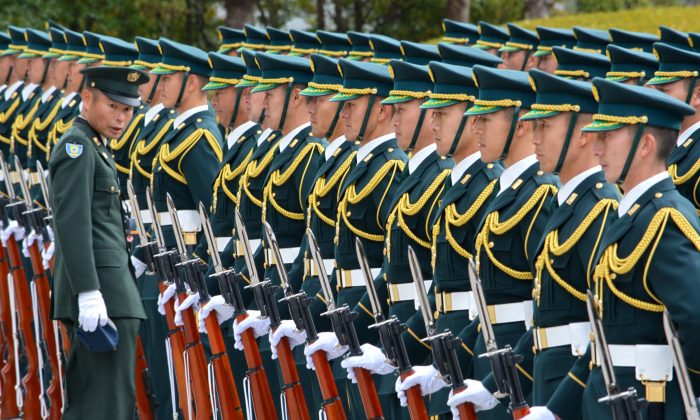 In less than two years, Japan transformed from a pacifist nation to a major military power willing and able to defend itself and its allies, and new draft legislation will further its shift. You can thank China for this.

While the changes don’t mean that Japan is immediately going to exert its military globally, they mean that that time could soon come: they will be able to join U.N. peacekeeping missions, defend their allies, such as the United States, and even extend their defensive capabilities into space.

Japan used to have its arms tied behind its back with Article 9 of its constitution, which outlawed war as a means to settle disputes. But in November 2013, the Chinese regime created an air defense zone over the East China Sea that included the Senkaku islands, which are under Japanese control yet claimed by the Chinese regime.

The Chinese regime didn’t let up. It threatened military action against anyone who entered its defense zone without permission, and began sending ships and jets into the territory. Japan didn’t back down.

According to an analysis of the U.S.–Japan defense alliance, from the nonpartisan Congressional Research Service, the Japanese government is now finalizing draft legislation for new security policies that may reform the role of Japan in global military operations.

Debate over the draft legislation that could even allow Japan to participate in U.N. peacekeeping missions, says the report, “will shine a light on the willingness of Japan to become involved in conflicts for the sake of aiding the United States, and on Japanese perceptions of the security environment in East Asia.”

Japanese citizens are becoming more aware of the military climate. A recent public opinion poll showed that 64 percent of Japanese think China poses a military threat, which the report notes “may lead Japan to shed more of its pacifist restrictions.”

The draft changes will affect Japan’s Mutual Defense Guidelines (MDG), which it codified with the United States in 1978 and updated in 1997. The report states, “The new MDG accounts for developments in military technology, improvements in interoperability of the U.S. and Japanese militaries, and the complex nature of security threats in the 21st century.”

Chinese regime threatened military action against anyone who entered its defense zone without permission.

If passed, the new MDG would allow Japan to cooperate with the United States on cybersecurity, the use of space for defense, and ballistic missile defense. According to the report, “Under the banner of collective self-defense, the Japanese military would be able to defend U.S. vessels and aircraft, provide noncombat logistical support to U.S. troops, and engage in minesweeping operations.”

Its proposed changes will also establish a  standing “Alliance Coordination Mechanism” that will involve agencies from the United States and Japanese governments. According to the report, “This new coordinating body removes the ‘seam’ between war and peace that had inhibited alliance coordination during peacetime, such as during the disaster relief response to the 2011 earthquake and tsunami in northeast Japan.”

It states the “decision to enable collective self-defense will facilitate Japan’s involvement in more U.S. conflicts, in more significant ways” and will give more opportunities to the United States and Japan through a deeper alliance.