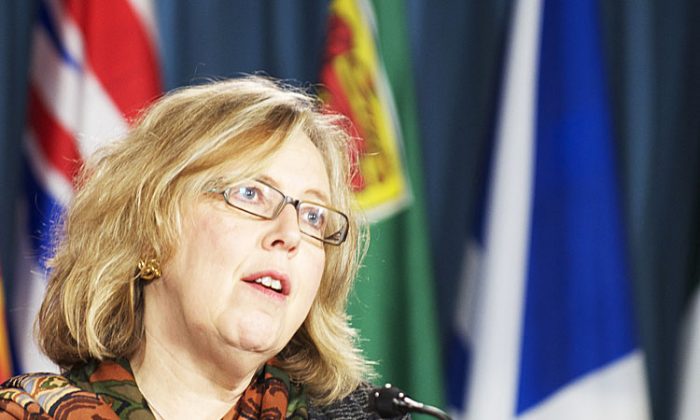 OTTAWA, Canada—China’s totalitarian regime will be able to sue Canada over lost profits resulting from stricter environmental controls or other regulatory changes under a foreign investor protection agreement Stephen Harper announced during his current trip to China.

The ramifications of the agreement were detailed for reporters Thursday by Green MP and party leader Elizabeth May. May said Chinese state investment in Canada’s oil sands (sometimes referred to as tar sands) and the new deal that Harper hopes to finalize after review by Parliament will open Canada to significant foreign influence by the Chinese regime.

She also highlighted that Chinese state investment could already be costing Canadian jobs.

For example, Chinese state-owned Sinopec, China’s top oil refiner, already owns enough shares of Syncrude, the dominant player in the oil sands, to veto the company from going beyond producing oil sands crude, or from refining the product further. Currently each of Syncrude’s seven owners gets their share of upgraded bitumen to refine or sell. May said Sinopec’s heavy investments in the Enbridge pipeline to the West Coast are part of a comprehensive effort to export crude oil to China, where Sinopec is the top refiner.

The Chinese state has between $12 billion and $20 billion invested in the oil sands, and is part of a consortium that is helping fund the regulatory and development costs of Enbridge’s Northern Gateway pipeline to Kitimat, British Columbia, where tankers would take oil to Asia. Sinopec’s money comes in exchange for guaranteed shipments via the pipeline and an equity stake.

The new deal Harper negotiated with the Chinese regime, touted as a way to protect Canadian foreign investments in China, comes with a significant risk to Canadian independence, said May.

“Our rights and sovereignty to exercise [our rights] over decisions made in Beijing are narrowing down to very few choices on a limited menu,” she said.

She said the investor-state provisions in the Canada-China foreign investment protection deal first appeared in Chapter 11 of NAFTA, and gave corporations the right to sue federal, provincial, or municipal governments if their expectations of profits were reduced, even if because of legitimate new health or environmental regulations. Chapter 11 has already led to Canada leaving a toxic additive in gasoline and paying tens of millions to foreign corporations, she said.

May claims Beijing could sue Alberta for raising water quality standards or sue Canada should the government ever try to come up with a plan for energy sovereignty and job creation that would keep bitumen in Canada to be processed within Canadian borders.

“We would be vulnerable to multibillion dollar lawsuits,” she said.

Canadians worried about American ownership in Canada should be even more concerned about ownership by Chinese state companies.

“These are not free enterprized corporations subject to rules and regulations of a like-minded country. These are corporations where the directorship of the boards is chosen by the Communist Party of China.”

She says Canada needs firewalls to protect itself from undue foreign influence. Meanwhile, Canada should continue to build its diplomatic relationship with China and tell the regime when its actions are unacceptable and offensive to Canadian values, such as imprisoning political dissidents, exporting toys made through prison labour, and repressing Tibetans.

She gave the most recent example of China and Russia vetoing the United Nations resolution calling for Syria’s President, Bashar al-Assad, to step down.

“China is doing a lot of oil business with Assad and Syria,” she noted, adding that Sinopec is key to Iran’s economic survival in the face of Western sanctions.

May said Harper should have delayed his trip to China for a few days, citing the need to do something about Syria, as a subtle way to show his disapproval without offending the regime too much by cancelling the trip all together.

The Prime Minister’s Office had not replied to requests for comment by press time.

The foreign investment protection agreement needs to be passed by Parliament and approved by the Chinese regime before taking effect. May hopes MPs will vote against the agreement, and said some Conservatives are deeply concerned with this issue.