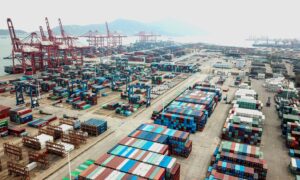 A free-speech group has called on Syracuse University to drop an investigation into a chemistry professor who referred to the virus that causes the COVID-19 disease as “Chinese Communist Party virus” and “Wuhan flu” in his course syllabus.

The U.S. Immigration Service issued a policy alert that explicitly prohibits members of the Communist Party and its affiliated organizations from applying for green cards and naturalization. Commenters believe that it is forcing the CCP members who want to stay in the United States to choose sides: either cut ties with the CCP or leave the United States.

The Chinese government is preparing to launch an antitrust probe into Google over alleged market monopoly of its Android operating system, which Beijing claims has caused huge losses to Chinese tech companies such as Huawei, according to two insiders.

Analysts believe that Beijing is trying to accuse Google of monopoly, despite blocking numerous Google apps inside China, in apparent political retaliation.

Both China Central Television (CCTV) and China Global Television Network (CGTN) recently claimed that the WHO’s Chief Scientist, Dr. Soumya Swaminathan, said, “China’s COVID-19 vaccines are effective.” However, a Hong Kong group proved that her statement was edited and taken out of context.