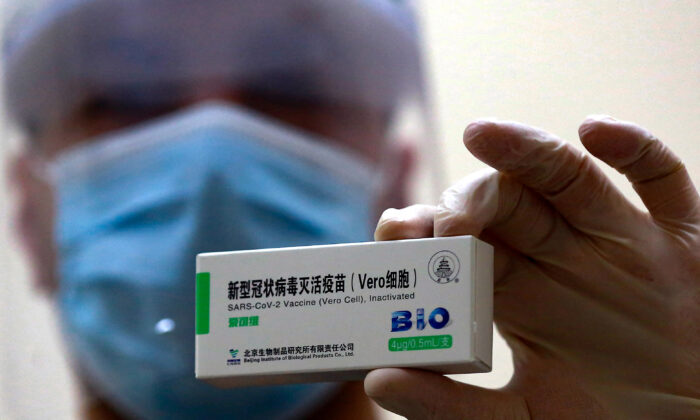 A health worker shows a dose of the Chinese Sinopharm vaccine for COVID-19 disease, at a vaccination centre in the Jordanian capital Amman, on January 13, 2021. (KHALIL MAZRAAWI/AFP via Getty Images)
China

While the efficacy of Chinese inactivated vaccines is in doubt, the Pfizer-BioNTech mRNA vaccine is still blocked on the Chinese Communist Party’s (CCP) approval process, and not allowed in mainland China. Meanwhile, state-owned Sinopharm announced it will develop an mRNA vaccine.

On Sept. 6, state-owned First Financial said that the National Pharmaceutical Group Co., Ltd. (Sinopharm) has begun developing an mRNA variant vaccine and expects to launch it next year. Sinopharm is the only central enterprise directly under the State-owned Assets Supervision and Administration Commission that focuses on life and health.

Chinese authorities had been resisting mRNA technology in the research for a CCP virus (also called the novel coronavirus) vaccine. “China has chosen a safe and mature inactivated vaccine route, while the mRNA vaccine route is immature and may pose a safety risk,” said mouthpiece Xinhua media on Dec. 29, 2020.

However, based on its actual efficacy, “China’s domestically produced vaccine has had little effect,” an anonymous Chinese lawyer told The Epoch Times, citing that the latest outbreak was triggered at Nanjing airport, where 37 people were infected, and 36 had received two doses of Chinese vaccines.

“Current domestic vaccines offer low protection against the COVID-19,” admitted Gao Fu, director of the Chinese Center for Disease Control and Prevention, saying “It’s now under consideration whether we should use different vaccines from different technical lines for the immunization process.” Gao gave the speech at a conference in Chengdu, Sichuan Province, on April 10.

Gao also praised the benefits of mRNA vaccines. The technology behind the vaccines Pfizer-BioNTech and Moderna is seen as the most effective, reported The Associated Press.

According to data from Healthcareitnews, Sinovac and Sinopharm are whole virus vaccines that “uses a weakened or deactivated form of the pathogen that causes COVID-19 to trigger protective immunity, also named inactive vaccine.”

Modena and Pfizer/BioNTech vaccines are RNA or mRNA vaccines that, “instructs the cells to produce antigens and then detected by immune cells, triggering a response by the body’s lymphocytes,” and thus allow immune efficacy to be more easily amplified.

On Dec. 31, 2020, the World Health Organization (WHO) approved the Comirnaty COVID-19 mRNA vaccine for emergency use, jointly developed by Pfizer and BioNTech, therefore also called the Pfizer-BioNTech vaccine.

Clinical trials proved that the Pfizer-BioNTech vaccine has an overall vaccine efficacy of 95 percent, according to a Feb. 19 assessment report issued by European Medicines Agency.

While the Sinovac inactive vaccine has a different efficacy rate from each of the trials conducted in some countries, ranging from around 50 percent to over 83 percent, reported The Associated Press.

The Sinopharm official website said that its inactive vaccine has an efficacy rate of 79 percent.

On 23 Aug., 2021, the U.S. Food and Drug Administration (FDA) granted full authorization to use the Pfizer–BioNTech vaccine to prevent COVID-19 disease in individuals 16 years of age and older.

Early in May, Fosun Pharmaceutical established a partnership with Germany company BioNTech Biotech, the co-maker of the Pfizer-BioNTech vaccine with Pfizer. Both parties agreed to produce mRNA vaccines with an annual capacity of 1 billion doses in China. However, the mRNA vaccine also called the Fubitai vaccine in Chinese, has not received license approval in China.

Some investors were concerned that the Fubitai vaccine could not be listed in China. Fosun’s chairman and general manager, Wu Yifang responded on Aug. 23 that he would communicate with Chinese regulators, according to First Financial.

The announcement of state-owned Sinopharm comes when the approval of Fubitai Vaccine is being blocked, which might indicate that “the CCP is fostering domestic companies,” said Li Yanming, a U.S.-based commentator on current affairs with a doctorate in Biology. “[The] CCP [is] concerned that the launch of Fubitai vaccine will lead to a boycott of domestic vaccines.”

In addition to Sinopharm, as early as June 2020, the CCP’s Institute of Military Medicine, Abogenbio Biotechnology in Suzhou, Jiangsu Province, and Walvax Biotechnology in Yunnan Province engaged in co-development of an mRNA vaccine. However, after approval by the State Drug Administration, the vaccine phase 1 clinical  trials have been stalled and no data has been released.

The Epoch Times reporter contacted Sinopharm, Institute of Military Medicine, Abogenbio Biotechnology, and Walvax Biotechnology for comment, but has received no response as of publishing time.

“Chinese vaccines are being approved and administered at an extraordinary rate; however, as the virus mutates and fails to form an immune barrier, each vaccination is equivalent to being poisoned,” Guiyuan, with a doctorate in medicine, told The Epoch Times.

“CCP’s Great Leap Forward in vaccines is absurd and completely against the normality,” said Guiyuan.

Seychelles, Chile, Bahrain, and Mongolia, the main countries using the Chinese vaccine, were listed among the top 10 most severe outbreaks globally, according to an article in the New York Times on June 22.

On Aug. 19 Johns Hopkins University announced it would accept only vaccines approved by the U.S. FDA, including Moderna, Pfizer, and Johnson & Johnson. Chinese vaccines Sinopharm and Sinovac are not endorsed, and  students who received those vaccines in China will need to receive the approved vaccines before Oct. 8 when they return to school.

On Sept. 1, North Korea rejected 3 million doses of the Sinovac vaccine from China, saying China should send them to severely affected countries. The Institute for National Security Strategies (INSS), a South Korean think tank, said that North Korea was not keen on the Chinese vaccine because it worried that the Chinese vaccine would be less effective, reported Reuters.

Some countries that once received mainly Chinese vaccines are also beginning to change their vaccination policies. For example, health care workers in Indonesia will receive the Moderna vaccine after two doses of the Sinovac vaccine; Bahrain is urging people over 50 to receive a booster dose of Pfizer after two doses of the Sinopharm vaccine; Thailand has decided to give the AstraZeneca vaccine after a first dose of  Sinovac vaccine.