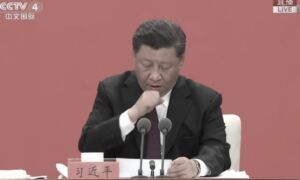 The agency said in a statement on October 20 that after an investigation, CBP had determined that Inner Mongolia Hengzheng Group Baoanzhao Agriculture, Industry and Trade Co. used prison, forced, or indentured labor to produce stevia extracts and derivatives. It added that those products are being, or are likely to be imported to the United States. Stevia is a plant extract used as a sweetener in sodas and other foods.

The investigation arose after the agency received a tip-off in 2016 from a non-government organization that stevia produced by the Chinese company was made with prison labor. That year, the CBP issued a detention order on imported stevia produced by Baoanzhao based on “reasonable but inconclusive proof” of forced labor.

Japan’s military has agreed to create a framework for protecting Australian Defence Force assets as the two countries forge stronger bilateral ties amid rising tensions in the Indo-Pacific.

On October 19, Japan’s Defense Minister Nobuo Kishi announced the transition in a joint statement with Australian Defence Minister Linda Reynolds, who visited Tokyo for bilateral discussions with her counterpart.

Kishi said: “Australia is our ‘Special Strategic Partner’ in the region and Japan Ministry of Defense, and Self-Defense Forces are going to deepen our bilateral defense cooperation and exchanges to uphold and reinforce the Free and Open Indo-Pacific.”

Reynolds concurred with Kishi saying: “Japan and Australia share a vision for a region that is open, that is inclusive, and one where the sovereignty, and the rights of all states, large and small, are respected.”

She added: “Australia and Japan are working together to enhance our defense partnerships right across Southeast Asia and the Pacific. I am so proud to be standing next to Kishi-san at the beginning of our productive and important working relationship for both our nations.”

high-profile commemoration, eulogizing the Chinese Communist Party (CCP)’s “great victory” and claiming that its participation in the Korean War was “a historic decision to protect our motherland.”

However, some Chinese netizens questioned, “Who waged the Korean War?” Some netizens also exposed that the CCP was not a winner but a big liar in this war.