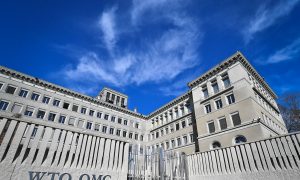 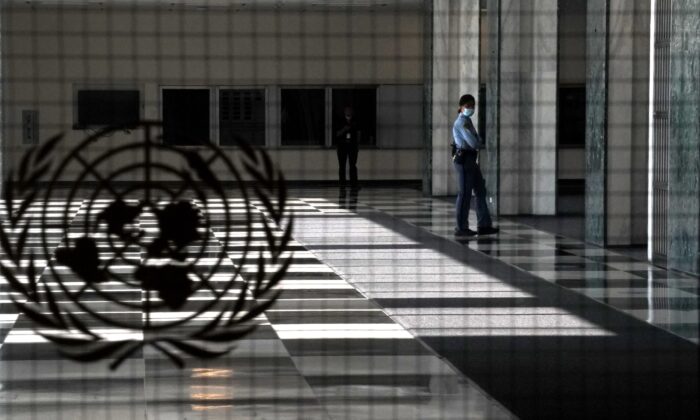 A U.N. police officer stands at an empty entrance at the United Nations in New York on Sept. 22, 2020. (Timothy A. Clary/AFP via Getty Images)
Infiltrating the West

An Indian think tank has warned of China’s expanding influence in the United Nations and its specialized agencies, with the international organization playing a role in promoting Beijing’s foreign policy initiatives.

“China is present either as the head or a deputy position in almost all the critical international agencies,” according to a May 27 report by the Mumbai-based foreign policy think tank Gateway House: Indian Council on Global Relations. The report highlights Beijing’s manipulation of global development, international rulemaking, digital and scientific standards, and multilateralism.

The ITU plays a major role in facilitating international connectivity in communications networks, with 193 member states and approximately 900 companies, universities, and international and regional organizations. It has ensured that Chinese telecom equipment maker Huawei and its standards are implemented through its development work in the African continent, the Pacific, and South and Southeast Asia, the report found.

UNIDO, which became a specialized agency of the U.N. in 1985, encourages industrialization in developing countries, but has now been taken advantage of by the regime in Beijing, according to the report.

In addition, the ICAO, which upholds air routes and safety standards, has excluded Taiwan from discussions, in a situation similar to that of the World Health Organization (WHO), under Beijing’s “disproportionate influence.”

The report cites cases in which China has utilized its dominant position within the U.N., coupled with financial assistance, to foster Chinese proxies among U.N. agencies, including the 2017 election of Tedros Adhanom Ghebreyesus, the director-general of the WHO, who is backed by Beijing. Ghebreyesus is the former health and foreign minister of Ethiopia, one of the largest recipients of Chinese investments in Africa.

Late warnings and travel restrictions issued by the WHO over the global CCP (Chinese Communist Party) virus pandemic were “a globally devastating outcome borne of China’s influence,” the report states.

Additionally, the U.N. Department of Economic and Social Affairs, the U.N.’s think tank, is headed by Liu Zhenmin, a lawyer in China’s foreign ministry.

The report concludes that China has increased its influence through increased monetary contributions, being the second-largest donor to the U.N., with voluntary donations increasing 346 percent since 2010.

The report recommends that India should evolve from being a defensive “rule taker” as it currently is, into a proactive “rule maker,” and integrate itself into the U.N.’s multilateral bodies.

The think tank suggests that India increase its voluntary contributions to U.N. agencies, with contributions from India’s growing philanthropic sector.