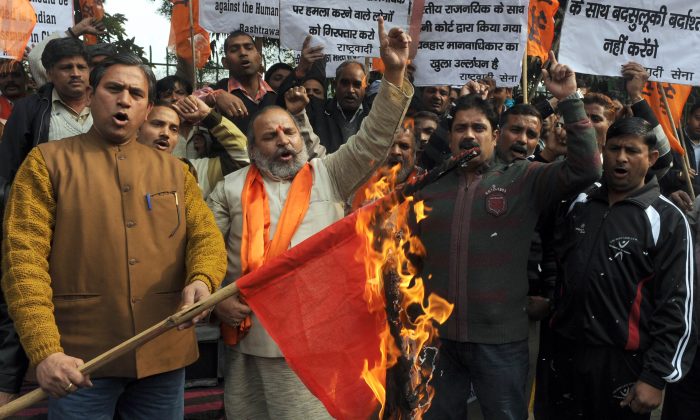 Activists of the Indian right-wing Hindu organization Shiv Sena shout slogans as they burn a China national flag while protesting land grabs by China in Ladakh during a demonstration in Amritsar on April 25, 2013. On Monday, the Chinese army again transgressed into the Ladakh region just days before Chinese leader Xi Jinping's scheduled visit to India. (Narinder Nanu/AFP/Getty Images)
China

Just two days before Chinese leader Xi Jinping is scheduled to visit India, local Indian officials report a conflict with the People’s Liberation Army (PLA) in Ladakh, a northern region on the border with China.

On Monday, local officials, said Chinese citizens and soldiers were objecting to the construction of an irrigation dam, about 650 yards away from the de facto border in Demchok, in the southeast region of Ladakh.

“China is having issues on it. When our civilians go to work [on the canal] in the village, they stop them,” said Simrandeep Singh Gill, District Magistrate of Leh, according to New Delhi TV (NDTV). He said this issue has been going on for a week.

Regarding the conflict on the border, India’s External Affairs Ministry responded cautiously.

“Let me assure you that our soldiers on the border will address all issues that happen there. What happens at the border will be handled by those posted there. There are unresolved issues between the [two] countries,” said a Ministry spokesperson, according to NDTV.

When Modi came to power earlier this year, he emphasized development of the border region and promised more resources to Indian troops stationed there. India’s border region is less developed than China’s, giving the Chinese army an advantage in the event of a serious border conflict.

While both India and China are trying to build greater bilateral economic ties, the issue of the disputed border between the two countries has strained relations. Frequent incursions by the PLA over the last five years has aggravated the situation, and Modi has made it clear India will not tolerate these types of transgressions.

“While there are differences with regards to some territorial disputes, neither would confront [the other] as neither India nor China would … like to see the involvement of external power in the sub-continents—especially the influence of the U.S.,” said William Nunes, a strategic analyst based in Gujarat.

The issue of PLAs incursions are likely to be on the agenda during Xi’s visit to India.