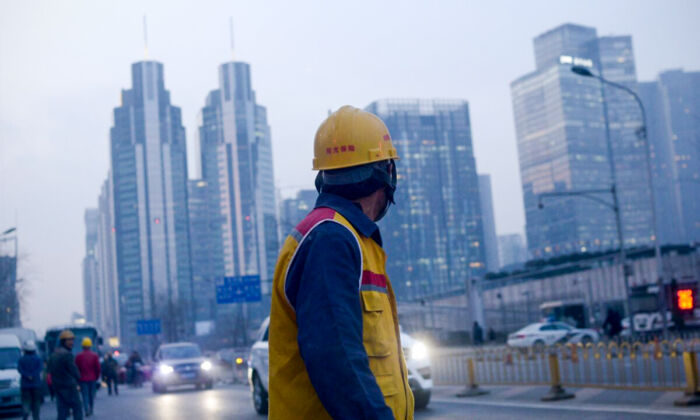 A Chinese worker looks back as he walks along a street after work in Beijing on Dec. 28, 2015. (Wang Zhao/AFP via Getty Images)
Thinking About China

China in the Process of Housing Deleveraging

China has always been hoping to avoid the mistakes committed by its predecessors. A decade ago when China was forced by the U.S. to appreciate its currency value, China refused to do so aggressively. From 1985 to 1987, USD/JPY fell from 260 to 120, or the Japanese Yen appreciated by more than double. Chinese Yuan obviously did not follow suit during the late 2010s. The Yuan appreciated by only one-third from USD/CNY 8.2 to 6.2 between 2005 and 2013, an increase of less than 4 percent per annum, but it did not prevent a bubble from forming like that of Japan.

The formation of an asset bubble does not necessarily require external capital; this is especially true for the housing market which is by nature more local than other financial markets. With the backdrop of an economic boom, leveraging can be easily overdone when fueled with exceptional monetary easing. The lack of a well-developed stock market also squeezes most wealth to be stored in property. More importantly, China’s housing sector is well-known to be full of corruption and bribe, encouraging rent-seekers to hope for a sudden wealthy dream.

In these processes, the inflow of external capital is not needed. But one thing was in common for both Japan and China: they both earned a lot of foreign exchange by exporting their goods. For all asset bubbles, there must be corresponding stories behind them that are true to a certain extent. But housing is a sector that easily leads to huge misalignment because of its long cycle nature, usually lasting for 15 to 20 years. Very often it is not easy to tell the turnaround in advance because it happens after a series of decent corrections. Yet, there are still some leading indicators.

One is the construction kind of data like housing starts or building permits. It is well documented in the academic literature that housing starts can predict what will happen two to three quarters ahead because developers are the smartest guys with the smartest money and are well informed about policy. Naturally, they lead the rest of the mass.

Comparing the housing starts in China with that of Japan 23.5 years ago, we find amazing similarities as the accompanying chart shows. That is, the situation of China now is like that of Japan in early 1999, right after a crash from its peak.

As the 1990 bubble burst corresponds to that of China in 2014, now should already be the second crash. Japan’s experience is suggesting some third or even fourth rounds will be ahead. Nevertheless, each round could be separated by up to a decade. Incidentally, the previous peak was in 2010, the current one in 2020, and the upcoming plunges are expected to be in 2030 and 2040. How many of these are needed ultimately depends on how much excess remains after each round of deleveraging. It can continue until nothing is really overvalued.

One can see this process is talking about decades, hence the name “lost decades.” Without allowing the so-called hard-landing, the correction process is bound to be decades.