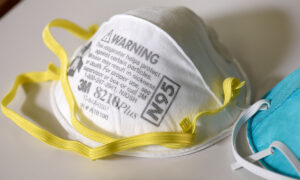 An inside source tells us a detention center has been emptied out in preparation for Hong Kong protesters. It’s in anticipation of Beijing’s new national security law being passed.

A new analysis suggests the Chinese regime has launched a propaganda campaign on Twitter as thousands of suspicious accounts have cropped up.

And two senators propose nearly $23 billion in incentives for overseas chipmakers to set up shop in the United States. That’s amid Washington’s tech rivalry with Beijing and telecom giant Huawei.