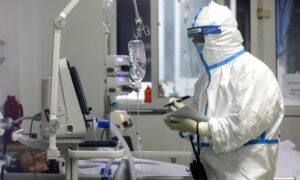 A Chinese official says the outbreak could strangle the country’s economy if the disease cannot be controlled by the end of this month.

In South Korea, a super-spreading event sparks fear after an entire city is told to stay inside and self-quarantine.

And two deaths have been reported aboard the Diamond Princess cruise ship quarantined in Japan, raising concern of the virus spreading globally.