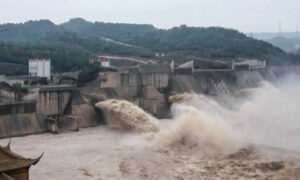 Beijing ordered the U.S. consulate in Chengdu to shut down in retaliation to a recent move by the United States. And this isn’t the first time the consulate has been caught in a political drama.

After a historical China speech by the Secretary of State, a Chinese dissident said Mike Pompeo told him the hard stance on China will last for decades.

The Yangtze river basin is facing heavy rain again. Authorities submerged some areas intentionally to save other richer areas, but farmers are not happy.

A couple in Hong Kong refused to stop fighting for freedom even if it cost them their wedding. They were put into jail for 4 days last year, and the judge acquitted them today.

And as the United States and allies push back against Beijing’s long-standing aggression in the South China Sea, China announced a live firing drill. Another country joins the list of rejecting China’s territorial claims in that area.