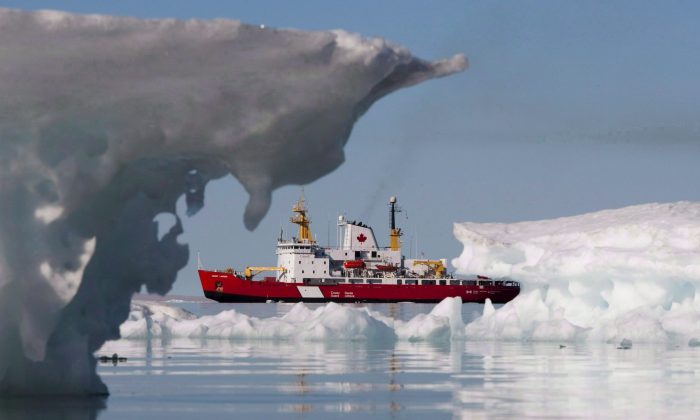 China Identified as Greater Threat Than Russia in the Canadian Arctic

Arctic at an ‘inflection point’ and ‘more strategically important than ever before’: Defence official
By Rahul Vaidyanath

China and Russia were identified as the two main military threats in the Arctic, but despite the latter’s devastating invasion of Ukraine dominating news headlines, two military experts perceive the threat from Beijing as being more dangerous and enduring for Canada.

“Many of the Chinese activities in and around the Arctic have dual-use purposes and could be used to advance China’s strategic and military interests. [China] views itself erroneously as a ‘near-Arctic state,’” said Kevin Hamilton, director general of international security policy at Global Affairs Canada.

He and other defence professionals and Arctic specialists were testifying before the Senate Standing Committee on National Security and Defence on March 21 at a hearing to “examine and report on issues relating to security and defence in the Arctic.”

Major-General Michael C. Wright, commander of the Canadian Forces Intelligence Command and chief of defence intelligence, said “there are many areas of convergence [between China and Russia], but I would say there are also areas of divergence and it is an unequal partnership—Russia very much the junior partner, and that will be increasingly so over the coming years.”

Beijing’s calculus amid the Ukraine crisis has been under close scrutiny—not just with regard to its evolving relationship with Moscow and threats against Taiwan—but also for its designs on the Arctic and accompanying menace to Canada.

Regarding Russia, the defence panellists agreed that there is a distinction between that country invading Ukraine and the threat it poses to Canada in the Arctic.

Hamilton said “the situation in Russia and Ukraine is not analogous from a geographic perspective to the security challenges we face in the Arctic. But it is a factor when it speaks to the psychology of the Russian regime.”

He added that the Ukraine invasion is a function of geography and the expansionist Putin regime.

But defence analysts have long been saying that Canada cannot rely on geographic isolation for protection.

At the Ottawa Conference on Security and Defence from March 9–11, Christopher Sands, director of the Canada Institute at the Washington, D.C.-based Wilson Center, reminded participants of the threat of missiles that can fly at least five times faster than the speed of sound.

“In an age of hypersonics, and other kinds of attacks, we can’t think of North America as protected by the oceans anymore at all,” he said.

Russia has fired hypersonic missiles at Ukraine. They are harder to detect as they can fly at lower altitudes and outmanoeuvre missile detection systems, such as the antiquated North Warning System in the Arctic—a joint Canada-U.S. network of radar built in the 1980s. China also possesses such weapons.

While it was acknowledged at the Senate committee hearing that Canada has not kept pace with the growing threat level from China and Russia, Jonathan Quinn, director general of continental policy at the Department of National Defence, said that “decisions have been taken” on additional investments in the Arctic and that details will soon be forthcoming.

“I would just flag that it’s certainly recognized that the investments that have been made today in the announcements made to date are not sufficient to meet the evolving threat environment. There is more that is planned,” Quinn said.

Quinn referred to the Canada-U.S. joint statement on NORAD modernization, issued in August 2021, which laid out four key areas for shared investments between the two countries.

“This is specific to NORAD, but a lot of the investments from the Canadian perspective that are identified there would be focused in the Arctic,” Quinn said.

He shed some light on what upgrades might be in the works. “We don’t necessarily anticipate … a one-for-one replacement of the North Warning System,” he said.

“We’re facing new challenges across a number of domains. So what we would likely be looking at is a surveillance system and systems that incorporate various elements to provide adequate warning and tracking of aerospace threats to the continent.”

“We view the Arctic to be at an inflection point where strategic competition, climate change, technological advancements, and economic interests are coming together in a way that makes the region more strategically important than ever before.”

‘Ideally Keep Ahead’ of China, Russia

Wright emphasized that there’s a major difference between the relationships authoritarian regimes have with each other and those that Canada has with its democratic allies.

“What I really want to perhaps drive home here is the importance of relationships with our allies with NORAD, but also with NATO, because an attack on a NATO country such as Canada would be an attack on NATO. So this is really the strength of the rules-based international order and of the allies,” he said.

The topic of raising defence spending to meet the NATO target of 2 percent of gross domestic product has garnered plenty of attention since Russia attacked Ukraine, and defence analysts have said that Canada can no longer be a laggard.

“The view of Global Affairs Canada is [that] investing in our domestic defence and Arctic capabilities allows us to engage more effectively, globally,” Hamilton said.

Quinn added that China and Russia are investing heavily in modern capabilities and that Canada needs to keep up with them and “ideally keep ahead of them, but also to keep up with our key allies in terms of the investments that they’re making.”

Another development that signals an inflection point in the Arctic came from the eight-member Arctic Council, the leading intergovernmental forum that promotes cooperation in the region.

The council, which is currently chaired by Russia and has a mostly environmental focus with no military component, announced on March 4 that it is “pausing all official meetings of the Council and its subsidiary bodies until further notice.”

At the Ottawa defence conference on March 9, Lindsay Rodman, a global fellow of the Wilson Centre’s Canada Institute, said “the idea that global geopolitics will not actually pervade the national organizations and institutions that have been created in the Arctic can no longer really be the case.”

“When I saw Russia massing troops on the Ukrainian border, I started saying Arctic exceptionalism just died. I think it’s been dying a slow death [since 2014],” she noted, referring to Russia’s invasion and subsequent annexation of Crimea.

China, though not a member of the Arctic Council, has participated in its work since 2007 and formally became an observer to the council in 2013.