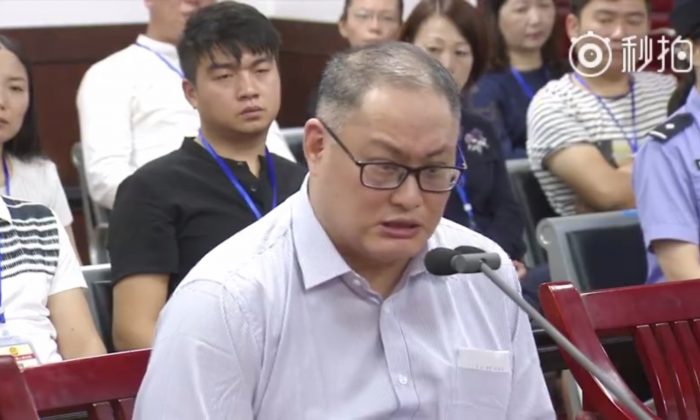 In a video released by the Chinese court, a visibly shaken Lee Ming-che can be seen reading out a statement in court that admits his guilt for “subverting” the Chinse government. Lee’s wife can be seen sitting in the last row of the court room. (Weibo Screenshot/Yueyang Intermediate People's Court)
Asia & Pacific

The Chinese regime held a show trial to convict Lee Ming-che, a Taiwanese human rights activist who has been imprisoned in China since March under charges of what the communist regime calls “subversion.”

Lee is the first Taiwanese citizen ever to become a political prisoner in China, and his case has attracted considerable international attention. Human rights groups and Lee’s wife, Lee Ching-yu, have blasted the Chinese regime’s treatment of Lee and have criticized the trial as being a mockery of justice.

Lee disappeared in late March when he attempted to enter China via Zhuhai, Guangdong, from Macau. The Chinese regime later confirmed that Lee was detained and charged with what it calls “subversion.” Lee’s alleged crimes consisted of sending books and materials to friends in China who are interested in human rights and engaging in online chat group discussions with other Chinese human rights advocates.

After 170 days in jail, the 42-year-old Lee went on trial in Yueyang Intermediate People’s Court in Hunan on Sept. 11. The hearing was broadcast live on the court’s Weibo (China’s equivalent of Twitter), supposedly to demonstrate that the trial was fair and open. Lee was tried along with his co-defendant, Peng Yuhua, who allegedly also participated in the “subversive” online chat group.

In the video, a visibly shaken Lee pleaded guilty to charges of “subverting state power” and can be seen reading out a statement in court that blamed “false portrayals of China in Taiwanese media” for his action. He also expressed his “gratitude” to the Chinese authorities and said he saw how “fair and civilized” China’s justice system is.

As is typical with China’s judicial system, nowhere in the recorded video of the proceedings did Lee’s court-assigned attorney speak in Lee’s defense, nor make any statement contradicting the prosecutors’ charges. The trial ended with both Lee and Peng’s “confessions,” and the court announced that a hearing on sentencing will be held on a future date.

Lee Ching-yu, moments before boarding her flight to China for her husband's state subversion trial. Her expression says it all. pic.twitter.com/OTZs6sELoF

Lee’s wife, Lee Ching-yu, who was allowed to travel to China and attend the court on Monday, released a statement asking the Taiwanese people to forgive her husband for the “embarrassing confession” he made in court under duress. Chinese authorities only allowed Lee to enter court in the middle of the proceedings, and she was seen sitting in the last row of the court room.

The court’s Weibo published several photos of the trial, including one that shows Lee Ching-yu reunited with her husband and holding his hands.

Since his arrest in March, Lee Ming-che was not allowed any communication with the outside world—not even his wife and family. Lee’s wife later posted on Facebook that she felt Lee was afraid of saying anything in front of her, and all that the couple could do was to hold hands and look at each other.

Lee Ching-yu has launched a relentless and high profile public campaign to seek her husband’s release. Previously, Lee attempted to travel to China in April but was rejected from boarding at the Taoyuan airport as her travel permit to mainland China was cancelled by the Chinese regime. She later traveled to the United States in May and testified at a U.S. Congressional hearing. She also met with various human rights NGOs and Trump administration officials.

The Taiwanese public has reacted to the trial with anger. Many Taiwanese netizens have been using a hashtag that translates to “we are all Lee Ming-che” on social media to express their solidarity with Lee.

Taiwan’s Mainland Affairs Council, which serves as the country’s official agency dealing with the mainland Chinese regime, dispatched a team of advisers and assistants to accompany Lee Ching-yu to China. It also released a statement after Sept. 11’s trial that says that it is “disappointed” that the Chinese government did not observe due process.

Despite this, many inside Taiwan still perceive the government’s response to the case as too weak and insufficient to demonstrate Taiwan’s resolve.

Previously, Taiwan’s Tsai Ing-wen administration had sought to minimize confrontation with the hostile Chinese regime on the other side of the strait. After reports surfaced that there was some friction between Lee Ching-yu’s high profile campaign and the Taiwanese government’s low profile approach to the case, the Tsai administration publicly pledged to ramp up efforts to rescue Lee Ming-che,