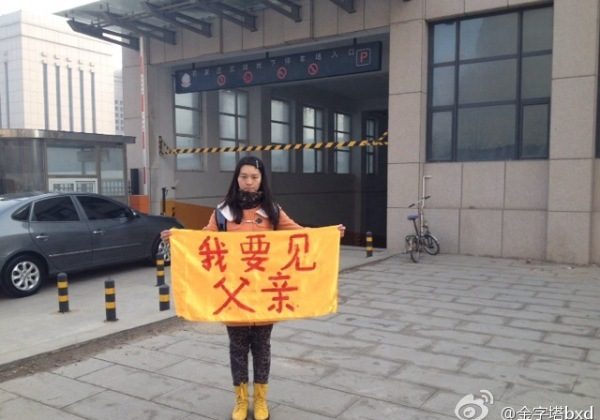 College girl Bian Xiaohui holds a banner that says "I want to see my father" on street on March 3, 2014. Bian and her cousin who took the photo have been detained, and went on trial on Dec. 12 being accused for "publicizing Falun Gong persecution" by putting the photo online. (Screenshot/Weibo.com)
China

A Chinese college student and her cousin were tried in secret on Dec. 12, using an obscure provision of the criminal law that many lawyers in China have argued is illegal, crafted specifically to persecute Falun Gong, a spiritual practice whose adherents have been targeted for elimination in China for the last 15 years.

No lawyers were allowed to defend the two, nor family members permitted to observe the proceedings. The two women—one a practitioner of Falun Gong, the other the daughter of an imprisoned Falun Gong practitioner—are being accused by the public prosecutor of a crime that is, according to their lawyers, not even on the books, leading them to declare that the entire process of detention and trial is itself illegal.

The charge used against the two is Article 300 of the criminal law: “using secret societies, evil religious organizations, and superstitions to undermine the implementation of the law.” The awkwardness of this particular law, enacted hastily in 1999 as the jerry-rigged legal basis for persecuting Falun Gong, has come under withering criticism by the Chinese legal community for its arbitrariness and alleged illegality—though it is still used by the security and judicial authorities in their ongoing campaign against Falun Gong.

In March, Bian Xiaohui, a college student from Tangshan City of Hebei Province was arrested by police when she sought to visit her father, a Falun Gong practitioner given a 12 year prison sentence in 2012 for his beliefs and activism to expose the persecution of the practice. After being repeatedly rejected by the prison in Hebei, Bian held a banner on the street that said “I want to see my father.” She was driven away by police.

Chen Yinghua, a Falun Gong practitioner, and relative of Bian, photographed Bian holding the banner and posted it online. A week later the two girls, plus Bian’s mother, were arrested: the two were accused of “propagandizing that Falun Gong is persecuted,” according to lawyers who spoke with Huang Jingling, Chen Yinghua’s mother, who lives in Calgary, Canada.

Falun Gong is self-cultivation spiritual practice that includes exercises and moral tenets. It has been persecuted since 1999, after more Chinese people began practicing it than were members of the Communist Party at the time. Thousands are reported to be dead from torture, while researchers say tens of thousands have been executed in the process of their organs being harvested so they could be sold.

Family members found out about the trial on Dec. 10, two days before it was to begin (family and lawyers are supposed to be notified at least three days before trials.)

Before the trial started at 9 a.m. on Dec. 12, relatives and friends of Bian and Chen waited outside the Chang’an District Court in Shijiazhuang City of Hebei—but none were allowed in.

The court said that only immediate family members are allowed—though they knew that Bian’s father and mother were held by the Party’s security agencies.

Chen’s nearly 70-year-old parents are both in Canada. The vice consul of the Canadian Consulate in Hebei sought to represent the parents to hear the trial, according to Huang, in Calgary—but the vice consul and his interpreter were denied entry because “the court is full.”

All three lawyers hired by Bian and Chen were denied entry to the court, and so were unable to defend their clients.

This is the second trial of Bian and Chen—the last opened on Aug. 21, but was adjourned after lawyers lodged a protest against what they said were the illegal actions of the court, according to the New York-based New Tang Dynasty Television. “The lawyers’ statements were even restricted. They just did whatever they wanted. The lawyers were threatened to be expelled and repeatedly warned once we made a statement. We lawyers couldn’t speak normally, and we were forced to leave,” Chen’s defence lawyer Zhang Jianwei said at the time.

In the past nine months of detention, Chen has gone on hunger strike multiple times in protest of her detention—she is currently in poor health, her mother said.