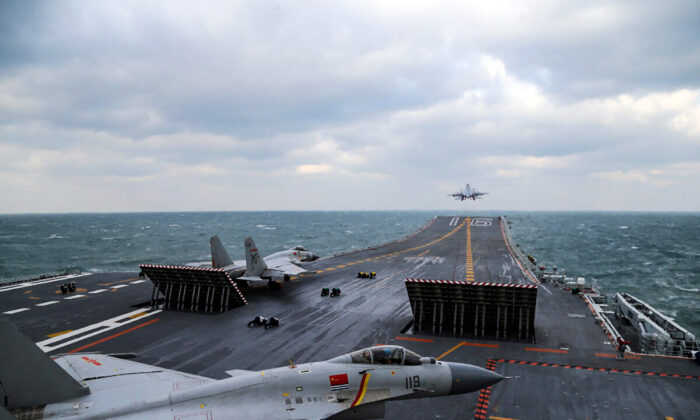 Chinese J-15 fighter jets are launching from the deck of the Liaoning aircraft carrier during military drills in the Yellow Sea, off China's east coast on Dec. 23, 2016.  (STR/AFP via Getty Images)
Taiwan

China carried out assault drills near Taiwan on Aug. 17, with fighter jets, anti-submarine aircraft, and combat ships exercising to the southwest and southeast of the island, in what the country’s armed forces said was a response to “external interference.”

In an Aug. 17 statement, the People’s Liberation Army’s (PLA) Eastern Theater Command said the drills were “using actual troops” and that “recent U.S.–Taiwan provocations … severely violated the peace and stability across the Taiwan Strait.”

Taiwan, which is claimed by the Chinese regime despite the island having been ruled as a separate entity for decades, has complained of repeated Chinese military drills in its vicinity in the past two years. The PLA drills have been widely viewed as part of a pressure campaign to force the island to accept China’s rule over it.

The assault drills are different from those carried out as a matter of routine by the PLA. The Aug. 17 drills were held near Taiwan’s southwestern and southeastern waters, in both the South China Sea and the Philippine Sea, as well as the Bashi Channel that connects the two seas, according to the PLA’s statement.

“It’s special and rare that the PLA performs a military exercise in both seas. In the military sense, the PLA wants to show that it can cut the U.S. Navy’s transportation line via the Bashi Channel to the South China Sea [from the Philippine Sea],” Su Tzu-yun, director of the Defense Strategy and Resources Division of the Institute for National Defense and Security Research in Taiwan, told The Epoch Times on Aug. 17. “[The drills are] indeed a threat to Taiwan.”

The PLA suddenly announced the drills but didn’t release details regarding them. Taiwan closely monitored the drills and released related information.

The ministry said in a statement that it had fully grasped and assessed the situation in the sea and air “and is prepared for various responses.”

The U.S. Congress enacted the Taiwan Relations Act on April 10, 1979, to support Taiwan in deference to Beijing.

The “provocations” that the PLA claimed in its statement on Aug. 17 could include a meeting that was held last week, in which officers from the U.S. and Taiwanese coast guards discussed improving cooperation and communication.

On Aug. 4, the U.S. State Department approved a sale of $750 million worth of military equipment to Taiwan, which includes 40 self-propelled howitzers, 20 field artillery ammunition support vehicles, and other equipment, which angered Beijing.