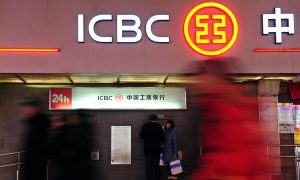 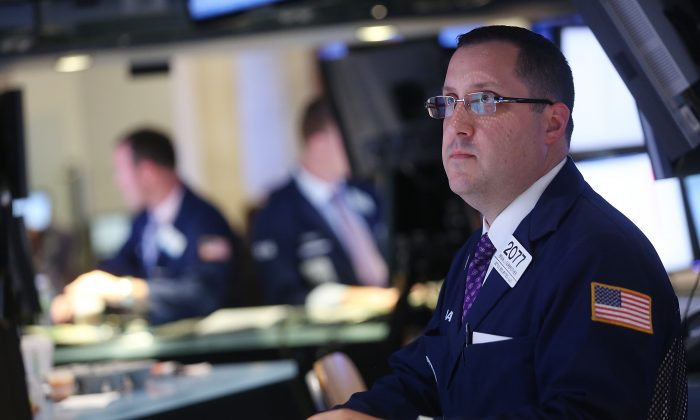 Traders work on the floor of the New York Stock Exchange prior to the closing bell on June 24, 2013 in New York City. The Dow dropped nearly 140 points to close at 14,659.56 following China and Federal Reserve concerns. (Mario Tama/Getty Images)
Business & Economy

Putting aside speculation over a monetary policy shift, the U.S. stock market has been spooked by an ongoing banking crisis in China along with overall weak economic data from the world’s No. 2 economy.

On Monday, Stephen Pope, managing partner at Spotlight Ideas, said in a MarketWatch report: “I would suggest that almost all of the downward movement in U.S. futures… is due to the concern over the state of the Chinese economy and the implications for the rest of the world. I am convinced we have overdone the downside with regard to that [Federal Reserve] story, but now with China we have another excuse to trade with timidity.”

Some correlation between foreign and U.S. markets is expected. But exactly how the Chinese economy moves foreign markets may seem less obvious. Let’s examine some of the biggest links.

A Boon for Industrials

Perhaps the biggest reason is that in recent years, U.S. and other western companies have relied on Chinese demand as a growth engine to offset weaker economies in their home markets.

China is the world’s biggest manufacturing and industrial base, and consumes a large amount of resources to support production and infrastructure expansion. The World Resources Institute estimated in May that China consumes almost as much coal as the rest of the world combined.

Impacts on the environment and air quality aside, China’s voracious appetite of coal is due to its hyper-active manufacturing sector, some of which is government-subsidized to keep its large population employed.

According to the World Coal Association, China was the biggest producer of steel in the world, and also accounted for 45.5 percent of the global steel usage in 2011.

Demand from the country’s manufacturing sector has driven recent growth at international suppliers of capital equipment, such as 3M, Caterpillar, and General Electric, all of which are Dow components. Growth in Chinese manufacturing has also been a boon to mining giants such as Alcoa (another blue chip firm) and Australia’s Rio Tinto, as well as American logistics firm United Parcel Service and Danish shipping giant Maersk.

Due to its industrial focus, the Dow Jones Industrial Average has become sensitive to Chinese economic news in recent years. For example, shares of Dow component Caterpillar tumbled in late April after the company updated its 2013 financial outlook with weaker sales in China, which has been one of its growth drivers.

The world’s No. 2 economy is also the world’s most populous country, and its large population drives demand for consumer goods, food, and healthcare products.

To multinational consumer product firms, China has become a growth engine while sales in the United States and Europe have stalled. For PepsiCo and Coca-Cola, growth in emerging markets such as China has made up for slowing sales in North America. U.S. fast-food retailer Yum! Brands generates roughly half of its global revenues in China, where its KFC franchise is the No. 1 fast-food chain.

Cincinnati-based Proctor & Gamble saw average annual sales growth of 17 percent in China over the past decade, far above the 3 percent overall sales growth for the company, according to its 2012 annual report.

News of slowing official Chinese GDP growth in May impacted foreign markets partially due to concerns of demand from Chinese consumers and their effects on consumer product-focused companies.

It was reported last week that the Chinese banking sector was experiencing a credit crunch. Inter-bank lending rates spiked over the last month and remain at high levels, signaling an unwillingness of banks in lending to each other.

Such a phenomenon, coupled with the suddenly hawkish behavior of the Chinese central bank, could lead to unexpected insolvencies, with banks unable to roll their short-term funding, meet margin requirements, or reach minimum reserve capital ratios.

A paralyzed Chinese banking system—and by extension, the inability of its government to support the economy—can have massive ramifications beyond just the “Big Four” Chinese banks.

The banking system is known as the lifeblood of any economy. The Chinese manufacturing sector may not have enough cash to fund working capital for production. Lacking liquidity, Chinese consumers, voracious buyers of foreign products, especially luxury goods, may scale back spending. Without bank loans, the high-growth Chinese construction and infrastructure projects may decrease its demand for foreign metals, commodities, and capital equipment. And the list goes on.

The reality is that many of the largest U.S. corporations depend on Chinese demand, and their share prices already factor in future earnings based on current projected growth of China. The same companies make up a large proportion of U.S. pension funds, retirement plans, and individual stock holdings.

And if the Chinese economy falters, or recent gains turn out to be a mirage, there will be real pain ahead for these companies and their investors and by extension the U.S. stock market.