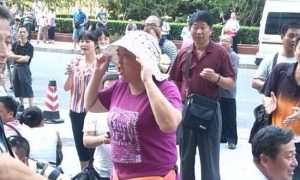 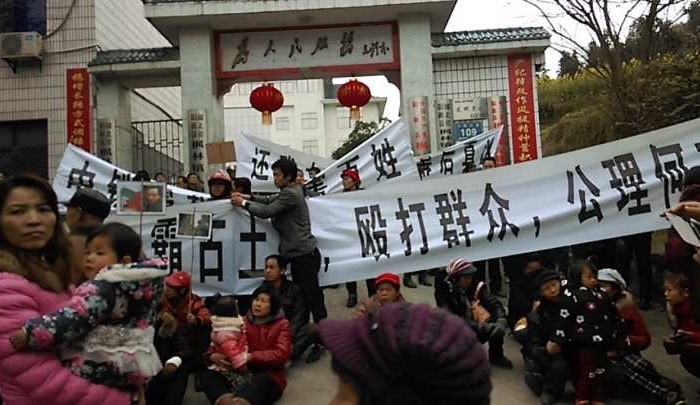 Villagers who lost land without any compensation hung banners in front of Fenglin Township government building. The banner in the front reads: "Our land was taken forcibly, our villagers were beaten, where is justice?" (Photo provided by villagers of Fenglin Town, Hubei Province)
China

Over one hundred villagers protested land grabs in front of the Fenglin Township government building in China’s Hubei Province on March 11. The Chinese regime’s Railway No.7 Bureau forcibly seized farmland and a mountain for a high speed rail project without providing any compensation to villagers. On March 3 hired thugs beat and injured 13 villagers who had tried to stop to the construction work.

One of the villagers, Mr Du told an Epoch Times reporter that local authorities mobilized two buses of anti-riot police to the protest site and told villagers to wait for two days for a reply.

However, Mr. Du believes it is just another avoidance tactic because villagers had already appealed to local authorities several times, and every time they were just told to wait for several days for a reply, and nothing would happen.

The high-speed rail project that started last year in the summer is to connect the eastern Jiangxi Province city of Jiujiang to the capital of Hubei province, Wuhan city in central China. China Railway occupied several hectares of a mountain and farmland, and started construction with the help of local officials without consulting with any of the villagers.

There was “no negotiation at all when the construction started, we did not get one cent for compensation, they filled our land with mud and dugout the mountain without giving us any notice,” one villager said.

The construction company transferred compensation money to local authorities, but it was not passed down, according to an Epoch Times investigation. Consequently, the villagers started protesting last year.

The conflict escalated on March 3, when dozens of villagers went to the railway construction site to block the work. According to Mr. Du, China Railway staff first threatened the villagers by saying that they were not afraid of killing them, and then said that if worse comes to worst, they would just spend a million for compensation in the event of anyone getting killed.

They mobilized batches of thugs to beat us.
— Mr. Du, a villager from Fenglin town
“When the conflict broke out, they mobilized three or four truckloads of thugs equipped with steel bars and started to beat villagers. They mobilized batches of thugs to beat us. When the second batch of thugs arrived, somebody called the police, but they still beat us while the police and local government officials watched on the spot. After the beating finished, the thugs just left in their trucks without any obstruction, under the eyes of the police and government officials,” Mr. Du said.

The villagers realized there is no place for them to tell their grievances in China, and they can only hope for media reports to draw public attention to their plight, Mr. Du said.

The reporter tried many times to contact local government officials on the phone, but did not receive a response.