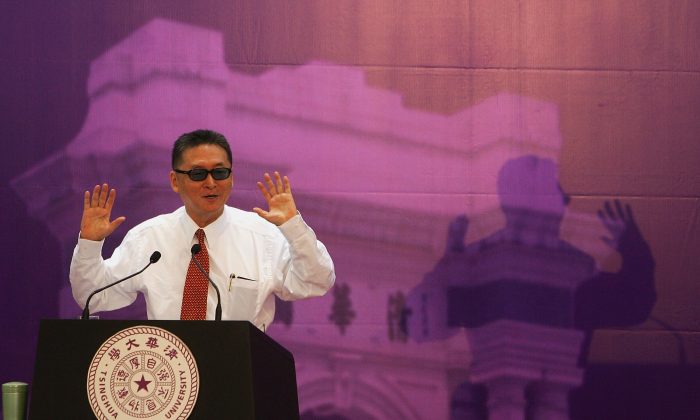 BEIJING – China let out a sigh of relief on Monday as Taiwan political maverick Li Ao wrapped up his speaking tour at top Chinese universities without again ridiculing the ruling Communist Party.

Li, 70, a member of Taiwan’s parliament which is notorious for punch-ups between deputies, gave millions of Chinese Internet users and television viewers an unprecedented taste of the island’s free-wheeling democracy last week.

In a no-holds-barred speech and question-and-answer session at Peking University on Wednesday, Li told students they needed to be wise when they strove for free speech because governments have tanks and machineguns and no qualms about crushing dissent.

He made no mention of the student-led Tiananmen Square pro-democracy protests, crushed by tanks and soldiers armed with machineguns on June 3-4, 1989, but the implication was clear.

However, Li appeared to tone down his speech at Fudan University in Shanghai on Monday.

“Li Ao, who is known to be bold for speaking up, restrained himself to some extent this time,” read an Internet posting under the pseudonym “Deep Blue Sea Moonlight”.

His acid speech riled propaganda mandarins who swiftly banned it on the Internet, but it sparked lively debate on Web sites which the Communists have been bending over backwards to contain.

China had trusted Li and allowed him to address its top universities because he was opposed to formal independence for self-ruled democratic Taiwan, which Beijing has claimed as its own since their split at the end of the civil war in 1949.

Li was able to get away with what he said because he tempered his criticism with preposterous praise for the Communist Party, saying it should live for 1,000 years.

His unorthodox style was an eye-opener for most Chinese, accustomed to staid, choreographed speeches by their leaders.

“I think the society there is more open than ours and has more freedom of speech,” said Liu Mengxi, a physics freshman.

Li, a former political prisoner in Taiwan, had rarely criticised the Communist Party in his writings or on television talk shows and had supported reunification with China.

Li’s visit was part of Beijing’s increased efforts this year to woo Taiwan to return to the fold. But it backfired when Li seized the moment and took repeated swipes at the party.

Hong Kong’s Phoenix cable news network, which has close ties with Beijing, organised Li’s highly publicised visit and broadcast his speech live to millions across China, where public criticism of the party in state media is virtually unheard of.

Speculation was rife that Phoenix had told Li to stop ridiculing China during his talk at Tsinghua University on Friday.

Hinting that he had come under fire from his employer, Phoenix, Li teasingly and intermittently asked board chairman Liu Changle, who was among the audience, whether his speech was “safe”, drawing laughter from Tsinghua students.

Phoenix did not replay Li’s Peking University speech and replaced politically sensitive parts of his Tsinghua speech with international news. Chinese state television did not broadcast his speeches at all.

Newspapers, tightly controlled by the party, did not report his sardonic comments. Transcripts were pulled off mainstream Internet portals but debated in chat rooms.

“If the authorities were not psychologically prepared for Li Ao, they should not have allowed him to come,” one posting read. “Now, it’s like riding a tiger and difficult to get off.”

Propaganda mandarins have since ordered a smear campaign against Li, a media industry source said. One Internet surfer called Li a “cultural scoundrel”.