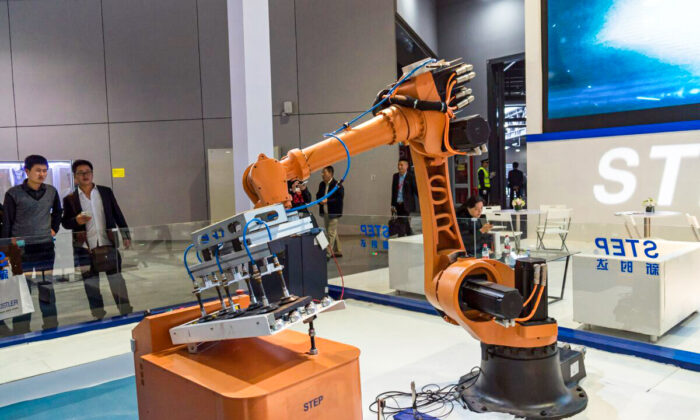 For nearly a decade, China has been the world’s largest producer and consumer of industrial robots. However, it has “no pricing power” in the market, experts say, due to foreign companies owning the core technologies.

According to China’s Ministry of Industry and Information Technology, it has been the world’s largest consumer of industrial robots for eight consecutive years. In 2020, the country’s robotics industry reported revenue of $15.7 billion, and its industrial robot density reached 246 units per 10,000 workers, nearly twice the global average.

However, China primarily manufactures lower-end products in the sector as foreign robotics companies control most of the high-end market share. The four leading industrial robotics brands in China are Japan’s Fanuc and Yaskawa, Switzerland’s ABB, and Germany’s KUKA.

KUKA was acquired by a Chinese firm in 2016 amid a financial downturn.

Industrial robots are machine systems with multiple joints and degrees of freedom primarily used for manufacturing. These robots can be automatically controlled or programmed to perform specific tasks, replacing complex and tiresome physical labor and carrying out repeated actions with a high degree of accuracy.

Some industrial robots are controlled by artificial intelligence (AI), making them capable of independent decision-making and performing highly complex and delicate tasks. A controller is considered the “brain” of industrial robots; it determines the system’s stability and accuracy, the two critical measuring criteria for a robot’s quality.

According to Tencent News, foreign-made industrial robots are superior to Chinese-made robots, primarily due to the more sophisticated algorithms designed for their controllers.

A controller’s algorithm is equivalent to a “language” that transmits the brain’s ideas. The sophistication and quality of the algorithm determine the robot’s stability, failure rate, usability, and ability to perform complex tasks.

Therefore, the failure rate of Chinese-made robots is reportedly several times that of imported robots. Many companies in China would rather buy second-hand robots from foreign nations at higher prices than Chinese-made robots at lower prices, according to the report.

The controller’s algorithm also determines the responsiveness of the servo system—consisting of servo motors and servo drives—working with the controller to perform the robot’s every action.

A reduction drive or reducer is a mechanical device to change a machine’s rotational speed. It has many forms for different purposes, but generally, it is used to reduce the speed and increase the torque to meet the needs of a working machine.

Manufacturing high-precision reduction drives involves high-tech personnel and significant capital. With most of the core technologies owned by foreign companies, China has little to no pricing power in the industrial robotics sector.

Chinese-made industrial robots are mainly used in low-precision manufacturing, while China relies on imports for high-end sectors such as aerospace and military, according to Beijing’s mouthpiece People’s Daily.