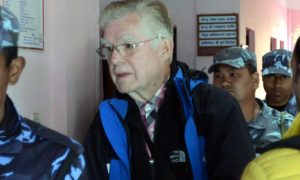 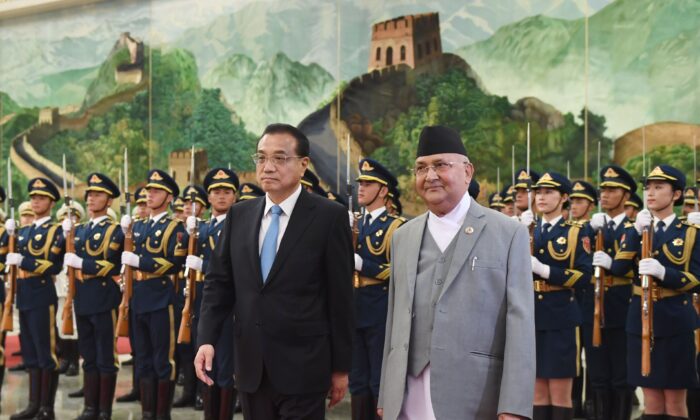 China Has Repeatedly Grabbed Land From Nepal and Enforced Stringent Trade Policies With It: Experts

NEW DELHI—China’s recent annexation of 150 hectares of Nepalese land is a gesture aimed at teaching the country a lesson after its exporters complained about China’s stringent trade policies in early October, experts say.

“To me, it seems like China is trying to send in a message through this posturing that if you question us, we have the capability to ‘teach a lesson,'” Manjari Singh, an associate fellow with the Center for Land Warfare Studies, a think tank of the Indian army, told The Epoch Times.

“One may recall that in early October, the Nepalese Exporter groups had raised a concern regarding failing of trade and hurdles in trading with China because of Beijing’s stringent policies.”

Nepali exporters have been facing trouble in exporting goods to China by road for the past few years, and Bachhu Paudel, president of Nepal Trans Himalaya Border Commerce Association, told Kathmandu-based outlet The Republica that the Nepali government has failed to lobby for the interests of Nepali traders.

Nepal is ruled by the Nepalese Communist Party, which has close connections with the Chinese Communist Party (CCP). The Chinese ambassador in Kathmandu reportedly played an essential role recently in sustaining Prime Minister K.P. Sharma Oli’s power when he faced ouster from within the communist alliance.

Nepali traders have been requesting that China allow the duty-free and quota-free export of more than 500 Nepali products, but in the early week of October, the Chinese side consented to only 188 items on the condition that their labeling be done in Chinese, which the Nepali traders said wasn’t workable.

“There was a realization that the Nepali exporters were not benefiting, and that way, the policies by Beijing are extractive. China has not allowed the export of 513 specified goods under the duty-free, quota-free provision, and therefore there is no comparative advantage for Nepal. Relaxations were made in nonessential items that don’t provide many dividends to Nepal,” said Singh, who is based in New Delhi.

“The Nepalese government sources mentioned in October that Nepalese edibles, meat, and other plant products were assured to get special consideration by Chinese. But that did not happen.”

Soldiers of the People’s Liberation Army were reported to have crossed over the border in Limi Valley and Hilsa in the Humla District of Nepal and moved the border-demarcating stone pillars further inside Nepalese land, the UK-based Telegraph reported.

“Why should China come over into Nepal, when China is already 60 times the size of our small country?” Jivan Bahadur Shahi, a lawmaker in the Nepali Congress, told The Telegraph.

The Chinese have denied the allegation and, according to a report by China’s state-run Global Times, the territory in question falls within Chinese territory. Local villagers, however, confirmed to The Telegraph the Chinese annexation of their land.

Singh said the whole episode looks more like the Chinese showing their “might and prowess” than just annexing a piece of land.

“One hundred and fifty hectares is a small land area, but it is someone else’s territory, and that is unacceptable to any nation-state. In international relations, territorial integrity is taken seriously,” she said.

China’s activity on the Nepali border is part of a broader border strategy in South Asia and encompasses the CCP’s agenda to annex Nepal, according to experts.

“The Himalayan borderlands of South Asia are beginning to see the fruition of linkages of China’s historical thinking and strategy, both politically and militarily. Today, China has galvanized the Chinese army along the entire Himalayan borderlands of South Asia,” Monika Chansoria, a senior fellow at The Japan Institute of International Affairs in Tokyo, told The Epoch Times in an email.

“This existential reality can be traced back to the era when Chairman Mao Zedong professed the ‘Five Fingers’ strategy following Tibet’s annexation, stating ‘Tibet is the palm, which we must occupy, then, we will go after the five fingers.’ The first among these fingers is Ladakh, followed by Nepal, Bhutan, Sikkim, and Arunachal Pradesh.”

Harsh Pant, a New Delhi-based strategic analyst with the Observer Research Foundation, told The Epoch Times that the annexation is part of China’s goal to acquire certain key areas in the Himalayas.

“So clearly there’s a strategic logic to the specific points, in particular, the specific areas that the Chinese are trying to bring under their control, and it is a gradual process and has been happening over a period of time,” Pant said.

“One building here, one move there, and then claiming that this is their territory. It’s a classic Chinese style of salami-slicing, and before anyone would know, most of this territory would be subsumed to the Chinese territory.”

Singh said that the Nepali opposition has been raising a voice against this land grab because it’s far from the first time China has annexed the Himalayan nation’s land. “Similar annexation plans were reported in May 2019 as well when China took control of some of the Nepalese villages,” she said.

Nepal’s ruling party has not pursued the issue because Oli doesn’t want to disturb his party’s close relationship with the CCP, according to Pant.

“This is not a surprise, and a lot of government agencies are involved, [such as] reports of how the agency that does the topographical survey in Nepal has been kept silent, although they have objected. There are a number of things regarding how Kathmandu and the Communist Party at this point is trying to hush this episode down and not make a big deal about it,” Pant said.

Singh said that the 150 hectares of land grab has a “strategic motive” to it and is a part of China’s “aggressive foreign policy” to construct the Belt and Road Initiative (BRI) in Nepal.

“In May 2019, the Nepali Ministry of Agriculture claimed that, owing to the Chinese BRI project, about 36 hectares of Nepalese land in four of its districts bordering China were annexed by the CCP government under President Xi Jinping,” said Singh.

“Owing to failure in lobbying, Nepal did not that time raise its voice to the correct levels and again the annexation of 150 hectares means that more land grabbing is in the coming. This is a serious issue given that the Chinese media mouthpiece the Global Times claims that the news on annexation is fake. This denial only proves that a perception battle is being fought by China.”

Pant said that the Chinese have established “close economic ties, close investment ties, close infrastructure ties” with Nepal over the past few years, and Oli’s government doesn’t want to harm that.

“The opposition is obviously trying to raise it for predictable reasons that the opposition clearly wants to bring pressure on the Oli government on this issue,” he said.

Chief of Army Staff of the Indian Army General MM Naravane being appointed an honorary General in the Nepalese Army. pic.twitter.com/ZTb5snamEN

Ratnesh Dwivedi, an independent political analyst based in Uttar Pradesh, an Indian state on the border with Nepal, told The Epoch Times that China is using Nepal, which is a buffer state between India and China, to send a message to its chief rival in the region.

“Ultimately the Chinese objective is not Nepal but India,” he said. India and China have been involved in an intense border conflict since June in Ladakh.

“China is trying to influence India through buffer states.”

Naravane also held bilateral talks with his Nepali counterpart in the first week of November and presented medical equipment to two field hospitals of the Nepali army. Dwivedi said that it’s a “very significant” move and shows that India and Nepal are trying to balance things with each other.

Pant said that Nepal conferring the rank of honorary general on India’s chief of the army staff is a standard practice between the two countries and has nothing to do with what’s happening with the geopolitical relations in the region.

“However, it does signify a slight warming up of relations between India and Nepal,” said Pant. India and Nepal were recently involved in a longstanding border crisis, and experts say it was at China’s behest.

Singh said India should help Nepal in strategic lobbying, as India has also recently faced border intrusion by the Chinese.

“However, this should be done through Nepali intervention and not unilaterally. This is also the time when India should pitch in its much-touted cost-effective trade plan with Nepal,” she said.