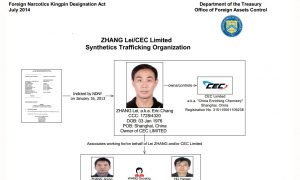 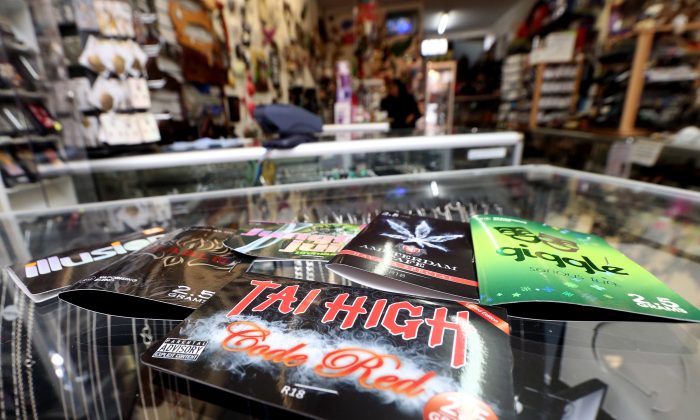 A collection of synthetic cannabis product lay on the counter on May 7, 2014, in a store in Auckland, New Zealand. Legislators around the world are trying to find ways to regulate synthetic drugs. (Jason Oxenham/Getty Images)
China

China Has New Drugs ‘Waiting’ to Dodge US Regulations

There may be more to synthetic drugs than meets the eye. The ever-changing substances with unpredictable dosages and effects are being churned out by factories, particularly in China, and by chemists knowingly creating the drugs to make regulation nearly impossible.

“Your law will be effective for a grand total of three to four months,” he said. “After that, the Chinese chemists will beat your legislators once again.”

Dryer’s comments were in response to a law the New Hampshire Senate unanimously passed last month. The Senate Bill 106 would restrict the sale and possession of synthetic drugs in New Hampshire with the help of a long list of banned chemical combinations.

The bill states it will also require a governor’s commission “to make recommendations for public awareness and education on the dangers of synthetic drugs.”

The drugs which are often sold at places like gas stations as “incense” are now the second most commonly used drugs for high school kids, just behind marijuana. The drugs are designed to mimick the effects of everything from marijuana, to LSD, to methamphetamine.

Under the new law, if one of these gas stations gets caught selling synthetic drugs, they risk losing their license to sell alchohol, lottery tickets, and food services.

The bill takes a unique approach, since it bans combinations of chemicals rather than finished drugs. It also attempts to dissuade the pseudo-legal sale of the synthetic drugs by placing shops in a game of retail Russian roulette if they keep the drugs on their shelves.

Regulators around the country are looking for ways to stem the flow of synthetic drugs, yet all of them face the same problem as New Hampshire: if they ban one drug, the chemists in China just make another.

“When Congress outlawed several of these synthetic drugs last year, traffickers did not stop producing them,” said Senator Dianne Feinstein during a Senate hearing on September 25, 2013. “Instead, they slightly altered the chemical structure of illegal drugs to skirt the law.”

Given the nature of the drugs, the United Nations Office on Drugs and Crime states in its 2013 World Drug Report refers to them as a “hydra-headed” threat that simply change shape whenever attempts are made to stop them.

A large portion of the drugs can be traced to a chemical company based in Shanghai called CEC Limited, also called China Enriching Chemistry.

The head of CEC Limited, Zhang “Eric Chang” Lei, was designated a drug lord by the U.S. Treasury Department in August 2014, alongside three of his employees (including his mother, who is part owner of the company).

“Global synthetic drug suppliers like Zhang Lei have fueled an epidemic of hospitalizations, paralysis, and deaths, especially among young adults,” said Adam Szubin, director of the Office of Foreign Assets Control, in a press release. “We intend to disrupt these networks’ operations and deny them the ability to conduct international trade.”