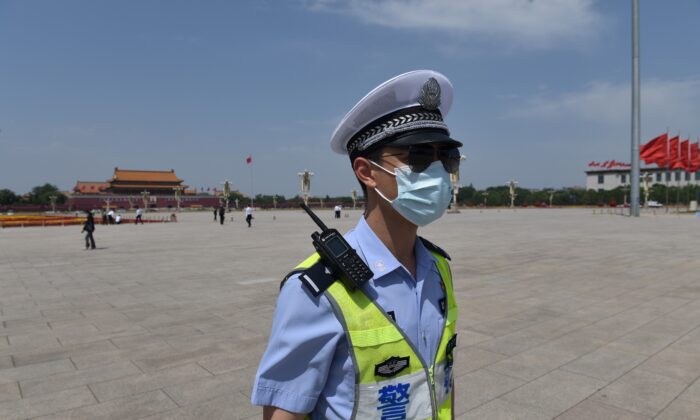 A policeman patrols in Tiananmen Square ahead of the closing session of the National People's Congress at the adjacent Great Hall of the People in Beijing on May 28, 2020. (Nicolas Asfouri/AFP via Getty Images)
China Human Rights

China Has ‘Disappeared’ Tens of Thousands Under System of ‘State-Sanctioned Kidnapping’: Report

This year, at least 20 people per day will be “disappeared” by the Chinese communist regime, according to a recent report by human rights group Safeguard Defenders.

These people are taken by authorities, without a court order, and thrown into secret locations, where they are held incommunicado and in isolation for up to half a year. Inside these facilities, people are denied access to a lawyer and family visits, and torture is common, the report (pdf) released on Aug. 30 said.

This system, which was legalized in 2013 and officially known as “Residential Surveillance at a Designated Location” (RSDL), allows Chinese police to operate without supervision and endows them with “unparalleled power over its victims,” said Peter Dahlin, director of the Madrid-based nonprofit.

“If the police wanted to, they can on day one break every bone in your body, let you heal up for six months, then release you—and no one would ever know,” Dahlin told The Epoch Times in an email.

Drawing from data on court verdicts posted on China’s supreme court database, Safeguard Defenders estimated that between 28,000 to 29,000 people have been placed into RSDL from 2013 to the end of 2019. However, the real number is likely to be far greater given that this figure doesn’t include those who were released from RSDL before any trial, the group noted.

“This is mass state-sanctioned kidnapping,” the nonprofit said in a statement.

The regime’s “widespread and systemic use” of enforced disappearances, reminiscent of kidnappings by South American dictatorships during the 1960s and 1970s, may constitute a crime against humanity under international law, the report concluded.

Dahlin said the system is often used against high-profile targets such as lawyers, NGO workers, journalists, and foreigners caught under the regime’s “hostage diplomacy.” These victims are detained for a lengthy period and released without their case proceeding to indictment or trial, the group said.

Last week, the Australian government announced that Cheng Lei, a naturalized Australian citizen born in China and anchor at China’s English-language state-run news outlet, was detained under RSDL in August. The reason for the detention is unknown, and no charges have been made.

Based on interviews with China’s RSDL victims, the group found that a significant number of victims reported physical torture, and all reported psychological torture.

“Once inside, you will live your life inside a small cell, and victims speak of not seeing daylight for months on end, and the fluorescent lights in the room are always on,” Dahlin said.

“In fact, the only break from staring into the wall will be the interrogation sessions that often takes place in another room near the cell, most often at night, to ensure disruption of sleep.”

Dahlin said that most victims who were later detained in detention centers or prison recounted their time in RSDL as “far harder, far tougher, than anything else.”

Given that RSDL is a form of solitary confinement, its use for more than 15 days constitutes torture under the United Nations Convention Against Torture—a treaty ratified by China, Dahlin said.

“This report concludes that the average duration of RSDL detention points to the systematic and widespread use of torture,” the report said.

Gao is a self-taught lawyer who defended citizens who faced religious persecution, such as Falun Gong practitioners and house Christians, as well as those who had their property illegally seized by the regime. Since 2006, the lawyer has been repeatedly disappeared, tortured, and imprisoned. Gao has been missing for more than three years.

Gao’s wife, Geng He, who fled to the United States with their children in 2009, previously told The Epoch Times that Gao’s brother often visits the local police station in Yilin city in northwestern China’s Shaanxi Province to ask about Gao’s whereabouts.

“One moment, they will tell him [Gao] is in Beijing and need to ask for instructions from higher-ups. The next moment, they say he is in Yulin, and that they don’t know where he is either,” Geng said.

Geng has implored the international community to help with finding her husband.

“Every day, I worry,” Geng said. “As soon as I stop working, I immediately think of him. It suddenly jumps into my mind, and then I call his older brother, but there is still no news.”