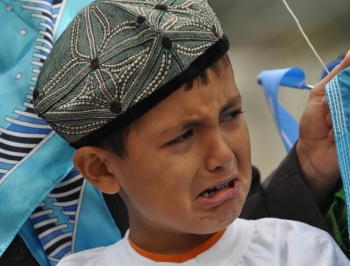 China Has Been Telling Lies About the Concentration Camps From denying the existence of the concentration camps to transferring thousands of Uighur prisoners to prisons in other provinces in China, Chinese authorities have been lying to the international community.

China has failed to hide the existence of the concentration camps despite its strong attempts thanks to Human Rights Watch reports, concerns expressed by the U.S. Congress, the U.N. Committee on the elimination of racial discrimination, academic researchers, testimonies provided by former detainees, and relatives of the victims. China has had to admit what became crystal clear to the world—the very existence of the concentration camps.

However, China has still been trying to obstinate itself against pressure from the international community. It has been doing so by telling at least three lies about the concentration camps.

China has lied that the concentration camps are “vocational training centres” or “transformation through education” centers.

There is a clear difference between vocational education and concentration camps. Britannica defines vocational education as “instruction intended to equip persons for industrial or commercial occupations.” It also defines a concentration camp as an “internment center for political prisoners and members of national or minority groups who are confined for reasons of state security, exploitation, or punishment, usually by executive decree or military order. Persons are placed in such camps often on the basis of identification with a particular ethnic or political group, rather than as individuals, and without benefit either of indictment or fair trial.” It also emphasizes that concentration camps are different from prisons where people imprisoned due to criminal behaviour. The definition tells that the purpose of establishing a vocational school is significantly different from the purpose of creating a concentration camp, and the people they target is dissimilar.

The descriptions provided in the media coverage and testimonies provided by the former detainees indicate that the camps built in China to lock up Uighurs resemble the facts about the concentration camps. French Press Agency (AFP) examined more than 1,500 publicly available Chinese government documents and stated that the camps are run “more like jails than schools.”

AFP also revealed that Hotan prefecture in the Uighur region purchased 2,768 police batons, 550 electric cattle prods, 1,367 pairs of handcuffs, and 2,792 cans of pepper spray in early 2018. Such equipment is unlikely to serve the purpose of a vocational school and raises questions about what a remote place like Hotan would have to need such equipment.

China has lied that the aim of the concentration camps is to train people.

Shohrat Zakir, the governor of Xinjiang, claimed that the concentration camps are training people on Mandarin language, Chinese history and laws, and aim to bring people into “modern” and “civilized” life. However, an official Chinese government document stated that in order to build better Chinese citizens, the camps must first “break their lineage, break their roots, break their connections, and break their origins,” according to an examination of government reports obtained by AFP.

Moreover, former detainees said the camps are designed to eradicate the ethnic and religious identity of Uighurs and other Muslim minorities to be assimilated into the dominant majority Han population.

Omir Bekali, a former camp detainee who was released because of his Kazakh nationality described that the detainees are forced to eat pork and to drink alcohol, actions contrary to their religious beliefs. He also said that he was asked to renounce his religious belief, criticize himself and his ethnicity. Another former detainee, Mihrigul Tursun, told the U.S. Congress that the detainees were forced to sing songs praising the Chinese Communist Party, to repeat slogans in Chinese like “leniency for those who repent, and punishment for those who resist.”

As a result of the mass internment and crackdown, the majority of the businesses owned by Uighurs have been shut down. The workforce in the rural area in the south of the Uighur region has gone either to the concentration camps or has been taken as cheap labour to inland cities in China. The streets of big cities and suburbs in the Uighur region became almost empty due to mass arrests and disappearance. Hence, the Uighur region’s economy has backslid dramatically since 2016.

China has avoided revealing the real number of detainees.

The Chinese communist government tightly controls the media in the Uighur region and has never allowed an independent investigation in the region. China has not provided any information about how many detainees have been locked up in concentration camps. Therefore, the exact number of detainees is still unknown. However, the number of detainees mentioned in estimated so far is worrisome. Human rights experts have estimated that the Chinese authorities have imprisoned at least one million Uighurs, with some sources claiming that there is evidence of up to three million detainees. Chinese Human Rights Defenders (CHRD), a Hong Kong-based advocacy group, founded that the number of detainees in the concentration camps may have already reached two to three million people by June 2018. This estimate was summed based on data collected through interviews and data provided by CHRD and its partner NGO Equal Rights Initiative in Kashghar Prefecture between July 2017 and June 2018.