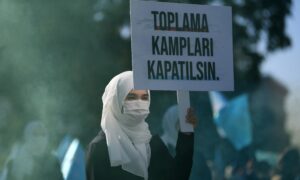 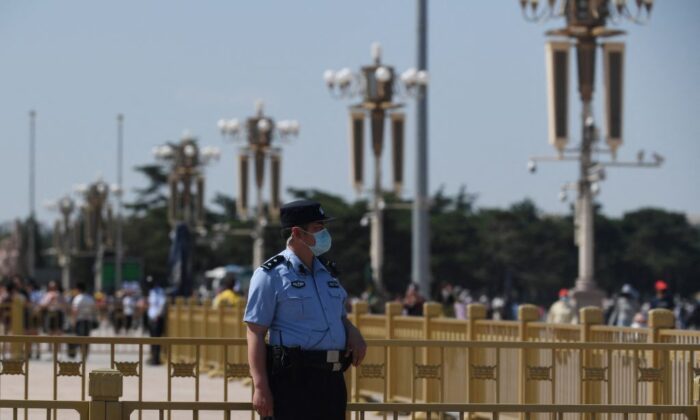 A police officer keeps watch in Tiananmen Square in Beijing on the 32nd anniversary of the deadly 1989 crackdown on pro-democracy protests, on June 4, 2021. (GREG BAKER/AFP via Getty Images)
Chinese Regime

China Has Become a ‘Prison’: Beijing Beefs up Security Ahead of Centennial Celebration

Chinese authorities are ramping up security measures around the country, especially in the capital city of Beijing, ahead of the Chinese Communist Party’s (CCP’s) centennial celebration on July 1. One Chinese citizen said China has been turned into a “prison.”

The 100th anniversary of the founding of the CCP will be a grand occasion and Chinese leader Xi Jinping will deliver a speech, authorities announced on March 23.

Prior to the announcement, the CCP has implemented a series of strict controls in order to “maintain social stability,” which is the term used by the regime to justify its totalitarian rule in China.

On March 20, 18 departments, including the Ministry of Civil Affairs, the Central Propaganda Department, and the Central Committee of Political and Legal Affairs, jointly launched a three-and-a-half-month special campaign to suppress “illegal social organizations.” State-run media Xinhua reported that over 500 “illegal social organizations” were identified and placed under investigation.

On June 11, the Beijing Municipal Government issued a flying ban from June 13 to July 1. Nine districts, including Dongcheng, Xicheng, Chaoyang, Haidian, Fengtai, Shijingshan, Fangshan, Tongzhou and Daxing, would be designated as “restricted flying zones.” All flying objects, including doves and drones, are prohibited. In Beijing, doves are usually raised as pets and kept indoors.

Mr. Wang, a Shanghai resident, told The Epoch Times that China is like a “prison” with total surveillance of the public. “I saw several petitioners, and they were stopped before they reached Beijing.” Petitioners are citizens who have grievances that they wish to bring up to the central authorities.

He said, “Notices have been posted on the internet. Now [the CCP needs to] maintain stability. Don’t go to Beijing. Trains, planes, highways, and cell phones are all controlled. Layers of layers of security. Cameras are everywhere. Where can you go? It is useless to go anywhere, they will stop you halfway. Now (in Beijing) even pigeons are banned from flying, all flying objects are banned. It feels like an invisible net is in the air and on land, and nobody can escape.”

An anonymous source in China provided a video to The Epoch Times showing six security guards inside a moving bus in Beijing. The guards were wearing red armbands that contained a device, which monitored the movement of every passenger.

Prior to the 32nd anniversary of the Tiananmen Square Massacre on June 4, authorities have been arresting dissidents or forcing them to leave the city since the end of May. The 1989 student-led pro-democracy protest movement is a sensitive topic in China and the CCP denies that it violently suppressed the protesters. Unnamed sources within the CCP said that at least 10,000 people were killed that day, according to declassified British cable and declassified U.S. documents.

Pro-democracy activists Zhang Yi, Zhu Tao, and Li Yong in Wuhan city were forced “to travel” to other places so that they wouldn’t be able to organize activities, or post comments on social media to commemorate the victims of the Tiananmen Square Massacre.

Dissidents including Zhang Wuzhou and Wang Aizhong in Guangzhou city, Chen Siming in Hunan Province, and Yang Shaozheng in Guizhou city were arrested around the anniversary of the Tiananmen massacre.

Wang Aizhong was very active on Twitter and often criticized the Chinese authorities. He was arrested on May 28. His wife Wang Henan posted a letter on Chinese social media on May 30, calling for his release.

Zhang Wuzhou was arrested after he put up a banner in public that read, “Don’t forget June 4.”

Chen Siming was also arrested on June 5 for posting a photo of himself holding up a sign that read, “Commemorating the 31st Anniversary of June 4,” from last year.

Beijing dissidents, including Cha Jianguo and Hu Jia, were taken out of the city by authorities before June 4.

U.S.-based China affairs commentator Tang Jingyuan told The Epoch Times that the Chinese regime is carrying out a high-profile centennial celebration because the CCP needs to use this opportunity to exaggerate its so-called “contributions” to China and the world, and to create a softer image for the international community.

Dr. Qin Jin, president of the Australian Democratic China Front, said that the CCP is already on a road that leads to destruction and it has to keep “making noise” in order to embolden itself.

He told The Epoch Times, “Now that the CCP’s international environment has worsened, it needs to put on a show in front of the Chinese people to achieve the political effect of deceiving them, even though it is already in dire straits.”

“It [the CCP] started a pandemic that spread around the world, temporarily alleviating the Trump administration’s countermeasures and strikes against it, but leaving the world devastated. Perhaps the world will learn from the pain and hold Beijing accountable. So, the CCP was just drinking poison to quench its thirst,” Qin stated.

Despite the regime’s efforts, Qin said that the so-called centennial celebration will not be well received by the world because more people are realizing the “evil” nature of the CCP.