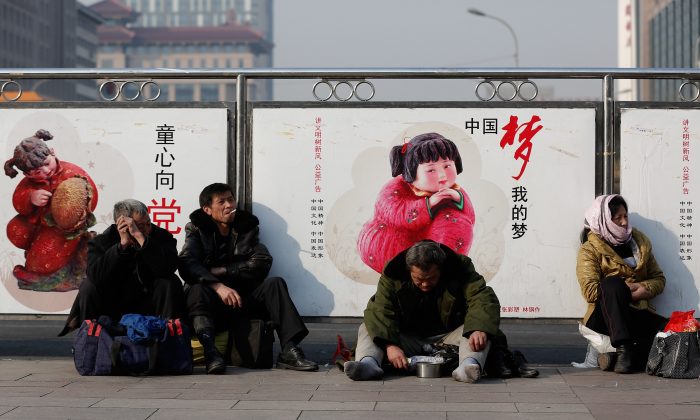 A beggar sits front government propaganda at Beijing Railway Station on March 2, 2014 in Beijing, China. Developed economies are based on a broad middle class—precisely what has not been attained in China. (Lintao Zhang/Getty Images)
China

China Has a Massive Class Problem, and It’s Not Getting Any Better

At the turn of the 20th century, China was still an empire, with a small elite at the top controlling the overwhelming majority of wealth and power, and a vast number of peasants on the edge of subsistence. Recently, the Chinese scholar Zi Zhongyun observed: “It’s been 100 years and there’s no improvement—at the top it’s still Cixi, and at the bottom the Boxers.” He was referring to Empress Dowager Cixi, who ruled the Qing Dynasty; the Boxers refer to the millions of disenfranchised Chinese who at one point attempted revolution.

The observation is apposite: despite the Chinese Communist Party’s founding promises, a genuine transformation of the social structure in China has not taken place, and the elite still control the vast majority of the wealth, while the middle class is relatively minuscule.

Social transformation includes a transformation of politics, the economy, and the structure of social classes, and it goes along with changes in consumption patterns, production patterns, cultural behaviors, values, and more. Developed economies are based on a broad middle class—precisely what has not been attained in China.

When reform and opening up began, Deng Xiaoping had promised the people a moderately prosperous society. Until 10 years prior to this century, the regime’s goal was to build an olive-shaped society with the middle class in the center. Many national projects were funded with that perspective. But all these proposals slowly disappeared from the official propaganda in less than a decade.

According to a 2013 report by the World Bank, there are about 300 million Chinese whose daily consumption is $1 or under. When added to the 303 million lower-middle class estimated by the Asian Development Bank, China’s poor account for almost half the population (which includes the 200 million unemployed, according to former Premier Wen Jiabao). The situation is getting worse, too. Along with the withdrawal of foreign capital and a deepening recession in the real economy, another 124 million people will likely lose their jobs, making China’s poor and “lower-middle class” over 60 percent of the population.

When people mention how many billionaires China has, it’s important to keep these numbers in mind, a stark demonstration of the failure of the project of class restructuring.

The reason behind this is simple: an utter failure to distribute fairly the benefits of China’s extraordinary economic growth. This relates to deep questions of the legal system, regulatory structure, and how all the costs and profits in society are shared out. In modern market economies, distribution of income takes place among workers, employers, and the Party-state.

Firstly, the share of wealth accruing to workers has been decreasing. This has been known for years. Zhang Jianguo, an official with the All-China Federation of Trade Unions, is on record saying that Chinese labor compensation has been falling ever since it reached a peak of 56.5 percent of GDP in 1983. It was 36.7 percent of GDP in 2005, a nearly 20 percent drop in two decades. The Ministry of Finance disputes this data, and the Chinese Academy of Social Sciences, as of 2013, said the numbers were closer to 50 percent in 2004 and 45 percent in 2011 (in the United States, for comparison, the ratio has been 58–60 percent over the past decade). This proportion is a direct determinant of the relative wealth of workers.

Secondly, returns accruing to capital have been off the charts. In the same interview, Zhang Jianguo said that the return on capital from 1978 to 2005 has been about 20 percent. (Though there are not complete datasets for these numbers, for example as a portion of GDP.) Peking University’s China Center for Economic Research estimates that from 1998 to 2005, the return on capital rose from 6.8 percent to 17.8 percent.

Researchers generally believe that this was caused by government expenditures being deployed to enhance capital returns, initial capital allocation being heavily determined by government policy, and crony capitalism, which allowed massive profits to accrue to those close to power, while the profit margins of small and medium enterprises got squeezed hard.

Everyone in China knows how this works: the numbers of corrupt officials increase every year, bribes become enormous, and projects, promotions, and stock in companies are used to buy officials. Those officials then use their political power to protect the excessive profits of the industries that they receive money from. While this happens, ordinary and law-abiding businesses have a difficult time operating, decreasing the entire efficiency of society, and thus further skewing wealth distribution.

Data from the “Chinese People’s Livelihood Report 2014,” published by the China Social Science Research Center of the Peking University, is revealing. In 2012, the Gini coefficient—a measure of the distribution of wealth—for the net wealth of households in China was 0.73. This means that the top 1 percent of households control over a third of the wealth of the whole country, while the bottom 25 percent control only about 1 percent.

Clearly, the middle class has been suppressed. Two conditions are required to change this: Advanced jobs must be created (the fluctuation of low-income migrant workers has little impact on the population of the middle class), and wages need to grow. Neither of these things has happened. Instead, promising career paths are increasingly scarce and difficult to enter, and the elite is selected in lineage fashion. This lack of dynamism will inevitably corrupt the quality of the elite social class, creating further social injustice.

These tensions exploded into public view recently in what was dubbed the “Xu Chune incident,” when a police officer shot to death a man of that name in a train station in the northeastern town of Qing’an. Before the facts of the case were even clear, the majority of the public instinctively sided with Xu, exposing at once their rage at the widespread deprivation of civil rights in China, and even more, the gaping class chasm that sits at the heart of the society.